According to The Globe and Mail, the Canadian government will be ending production of their one-cent coin in April, with distribution to stop in the autumn. After that, the government will begin withdrawing cents from circulation. The decision to round up or round down will be left to individual businesses; Ottawa has suggested rounding off to the nearest five-cent value. Over 660 million of the coins were produced in 2011. 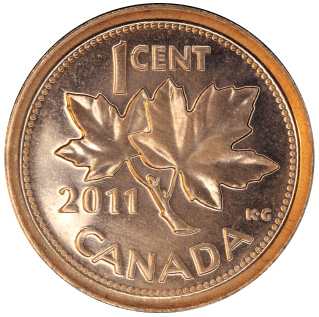 Each cent cost the government 1.5 cents to produce, and were described as a “nuisance” in recent Finance Ministry documents. “Pennies take up too much space on our dressers at home,” Finance Minister Jim Flaherty said. “They take up far too much time for small businesses trying to grow and create jobs.”

This move is not an isolated event, as well over a dozen other countries have ended their production and use of their lower-denominated coins since the 1970’s. The impact of this change have been estimated in saving the private sector $150 million in counting, storage and transportation costs.