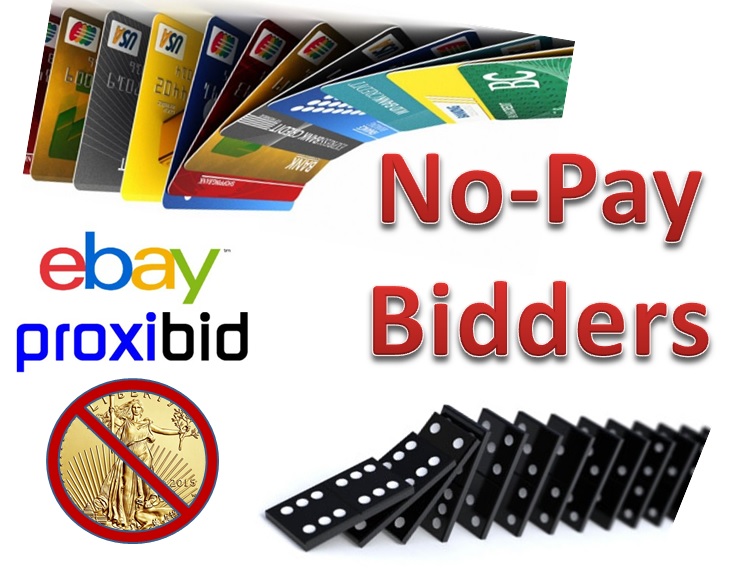 Online bidders who think coin auctions are a kind of video game do damage, not only to their own credit (if they even have or care about credit) but to portals, auctioneers, consignors and buyers who lost out on bids or who will pay ever-higher premiums when they do win coins.

I used to sell on eBay and had to follow up on no- and slow-pay buyers, often leading to uncivil messages that made me stop doing business on that portal, content to consign to popular auctioneers and pay 10-15% seller fees in addition to more fees for photos and listings.

I also consign on Proxibid with trusted auction houses, including Weaver Auction, Wallace Auction and SilverTowne (now Silver City). As a consignor, I regularly receive notices from my auctioneer partners that buyers never paid for the coins, and so my lots had to be relisted or returned.

But what about bidders? They wasted time watching their favorite lots go to other buyers raising bids above retail and, at times, to ridiculous levels (usually in a prank partnership with another registered bidder).

From my research, I believe that usually is the case with problem bidders who want the video-gamer thrill of winning spectacular lots replete with all the bells and whistles that eBay and Proxibid send on smartphones and desktops: YOU’RE THE HIGH BIDDER! BID AGAIN! YOU WON! CONGRATULATIONS!

The fun stops when the hammer drops.

Remember that rhyme. It’s no fun for Internet portals, auctioneers, credit card companies, consignors, or buyers as attempts are made to get the no-pay bidders to remit payment.

“Non-paying bidders are a real problem for everyone involved in auctions,” says Dave Nauert, an employee at  R. Howard’s Rare Coin Gallery that also operates as Silver City on Proxibid. “The consignor either gets their items back or has to wait to sell in another auction. The other honest bidders lose out on an item that they wanted. The online service provider loses out on their fees for the items that aren’t paid for. It truly covers everyone.”

Internet auctioneers have to rely on the services of portals like eBay and Proxibid to minimize the risk. “For the most part they are effective,” Nauert says. “There is a feedback system that allows auctioneers to report non-payers and place them on a no-bid list. This usually will prevent that bidder from registering for other auctions as well. Unfortunately, it only works after somebody has had a problem with the bidder.

“We recently had a bidder win several thousand dollars’ worth of items in an auction,” Nauert adds. “We noticed that the bidder was new to the website with only one prior auction and no negatives reported. As the auction went on and the winning lots were adding up, we contacted the website to see if they had any information on this bidder. They looked into him but weren’t able to find out any pertinent information. We emailed and called over the course of the next week to no avail.

“When we finally got him on the phone he said he wasn’t going to pay for all of that stuff and hung up. This one bidder killed the auction for us and all of the other bidders who wanted the items he was bidding on.”

Nauert’s company added this person to a no-bid list and left feedback that he refused to pay. “When we did this, we saw that another auctioneer had just had the same problem with him as well.”

Sheena Wallace of Auctions by Wallace says there will always be non-paying bidders, who fall into two groups. “The first is the person that doesn’t have the money to pay for what he bid on. They typically bid wildly and are willing to bid much higher than an item is worth. When their payment does not go through they leave you on hold for a period of time. You don’t know if they will pay or not.”

When that happens, Wallace files a dispute with Proxibid, which generally resolves the issue, although she says the online portal pays less attention to no-pay bidders who owe less than $100 for items. That’s unfortunate, she adds, because even with small sums, the auctioneer loses time and has to communicate with disappointed consignors.

“The second group of folks are your regular customers or regular bidders with Proxibid,” Wallace says. “Their cards expire or are replaced due to identity theft. It can take some folks weeks to get their cards updated in Proxibid.”

Wallace has seen improvement restricting no-pay bidders. “Proxibid has done a good job keeping out people who are trying to bid using someone else’s information,” she says.

Problems happen, though, when there is little time to react. Recently during an onsite and online auction Wallace had concern about a bidder. “He kept bidding up to $35 an ounce for one-ounce silver bars when silver was trading at $15 an ounce. While obviously he wasn’t getting to $35 an ounce on his own he was winning almost every lot.”

There is little an auctioneer can do in a situation like that, especially when two bidders conspire to keep bidding each other up, again as in a video game.

“Also,” he adds, “I recently had one bidder who won two rolls of coins for $115. While attempting to collect payment he told me that his girlfriend spent all his money. He went on to say that since I still had the coins that I should just keep them.”

Cheryl Weaver of Weaver Signature Coin and Currency Auction relies on Proxibid to deal swiftly with no-pay bidders. “It doesn’t seem to make any difference how many attempts we have made to call or email that same buyer,” she says. “He hears Proxibid better. We rarely have a buyer that doesn’t pay up in the end.”

One of her bigger frustrations are the buyers who either have no intention of paying with the credit card they have registered with or when she has to wait until they deposit sufficient funds. “It’s all time-consuming on our end.  We should probably start charging an extra fee for any credit card that requires extra time (calls or emails).”

Some auction companies charge $25 for any credit-card transactions that reports insufficient funds.

Wallace thinks Proxibid needs to do a better job in making it easier for bidders to update their cards online. Many bidders are not computer savvy, she says. “It seems to me that the software could be more user friendly for these folks. I have experienced many weekly bidders take up to three weeks to get their cards updated.  This can severely slow down the auction house’s ability to make timely payments.”

Dave Nauert of Silver City auctions on Proxibid has concern for bidders using debit rather than credit cards. Those often do not have sufficient funds to cover purchases. “We then have to contact the bidder for another card or wait for them to transfer funds.”

Despite the problems, Nauert tries to work with slow-paying bidders. “Although we prefer that quick payment, we are willing to allow extra time for bidders that need it to pay off the invoice. Anyone who legitimately wants the items and is willing to pay can be accommodated.”

Nauert advises all bidders to understand the basic principle of auctions. “The auctioneer is literally negotiating a contract to sell each item. Each time someone places a bid, they are entering a contract to buy that item. Everyone in attendance expects that contract to be upheld. I don’t know the motivation for the people that bid with no intention of completing the purchase. Perhaps the reasons are varied. Whatever the reasoning, they are doing real harm to everyone involved in the auction.”

Here are “10 Best Practices” to offset losses of no-pay bidders:

What are your opinions about no-pay bidders? If you sell coins online, in any venue, have you experienced this problem? What recommendations do you have? If you are a consignor experiencing a no-pay notification, tell your side of the failed transaction.

Maybe you’re a bidder wondering why someone placed ever-higher bids to win lots you wanted. Did you realize the auction house might have been scammed? Your thoughts?