Early Thursday morning I stopped by the United States Mint display (booth 705) to talk coins with the always friendly and helpful sales staff. These guys know their stuff, so when you visit, I encourage you to pick their brains and offer your opinions. Sales wouldn’t start until the general public was allowed on the bourse at 12 noon, so I made a note to come back later in the show and buy a couple medals for my collection.

A visit with bookseller Charles Davis to browse his selection of numismatic literature is always a highlight of any big coin show. Stop by booth 1062 and be prepared to be wowed by the depth and breadth of beautifully illustrated and well-researched books in our hobby. Charlie is a walking encyclopedia himself, so the conversations at his table are always interesting. I picked up a couple additions for my home library, and Charlie showed me some old Red Books with unusual features.

I enjoyed meeting and chatting with Byron Weston, one of the coauthors of the new book Contemporary Counterfeit Halfpenny and Farthing Families, a nicely illustrated and laid-out presentation of a rich historical subject. Published by the Colonial Coin Collectors Club (C4), the volume is printed on demand—a good use of modern technology for specialized publishing.

An important meeting with ancient-coin specialist Harlan J. Berk firmed up our plans to publish a second edition of his influential book 100 Greatest Ancient Coins. It was a pleasure to spend nearly an hour in far-ranging numismatic conversation with Harlan. After many, many years dealing in every aspect of the hobby, he has more stories than the old Sears Tower (a four-minute walk from his famous storefront in the heart of Chicago’s financial district). We’re excited to be updating his popular book to a new edition this year.

Back at the Whitman Publishing booth, I met up with Jeff Garrett, past president of the American Numismatic Association and longtime professional coin dealer, who this year has been named senior editor of the Guide Book of United States Coins. Kenneth Bressett is semi-retiring to the role of editor emeritus, with Q. David Bowers continuing in his position as research editor.

Unfortunately, Ken was sidelined in Colorado by the snowstorm that hit Baltimore earlier this week, and Dave’s flight from New Hampshire was also canceled. The crowds who showed up for their 2:00 and 4:00 book signings were disappointed but understood the situation, and were happy to have Jeff there to autograph the new 2019 Red Books that debuted at the Expo. We raffled off free copies of the hardcover and had delicious Red Book cookies to share.

There’s an unusual kind of energy on the bourse this week. Wholesale/trading business seems a bit slower than usual, but retail customers I’ve talked to are very happy. I talked with collectors who know that some hobbyists were stymied by the weather and weren’t able to make their way into Baltimore. Those who made it to the Expo are having fun and taking advantage of the wealth of offerings on the bourse.

The 2018 Spring Baltimore Expo, like the bright sunny weather outside the Convention Center, is just warming up. 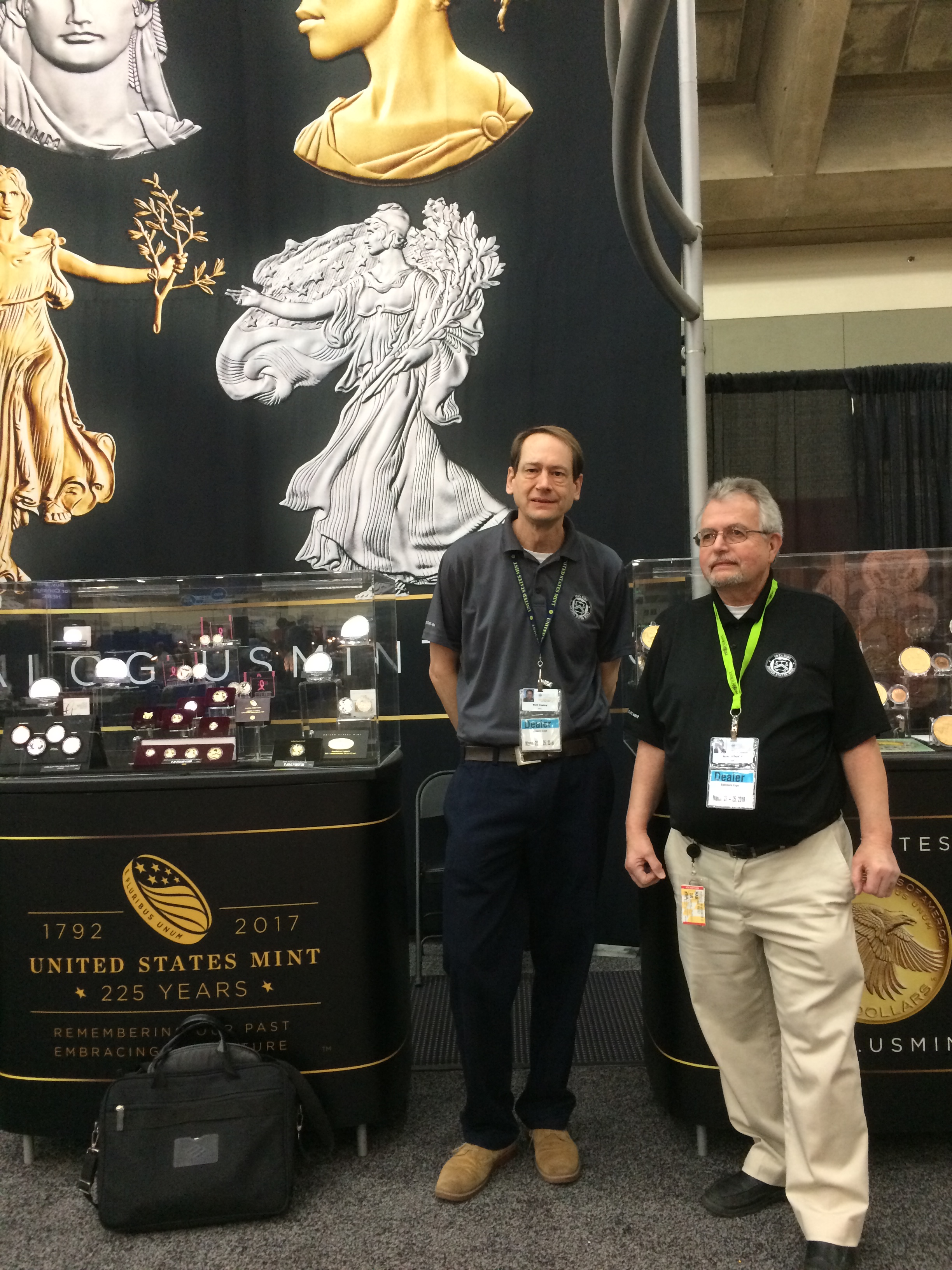 Visit the United States Mint gift-shop display: take a right as you enter the convention hall, then another right, past the Whitman Publishing booth. 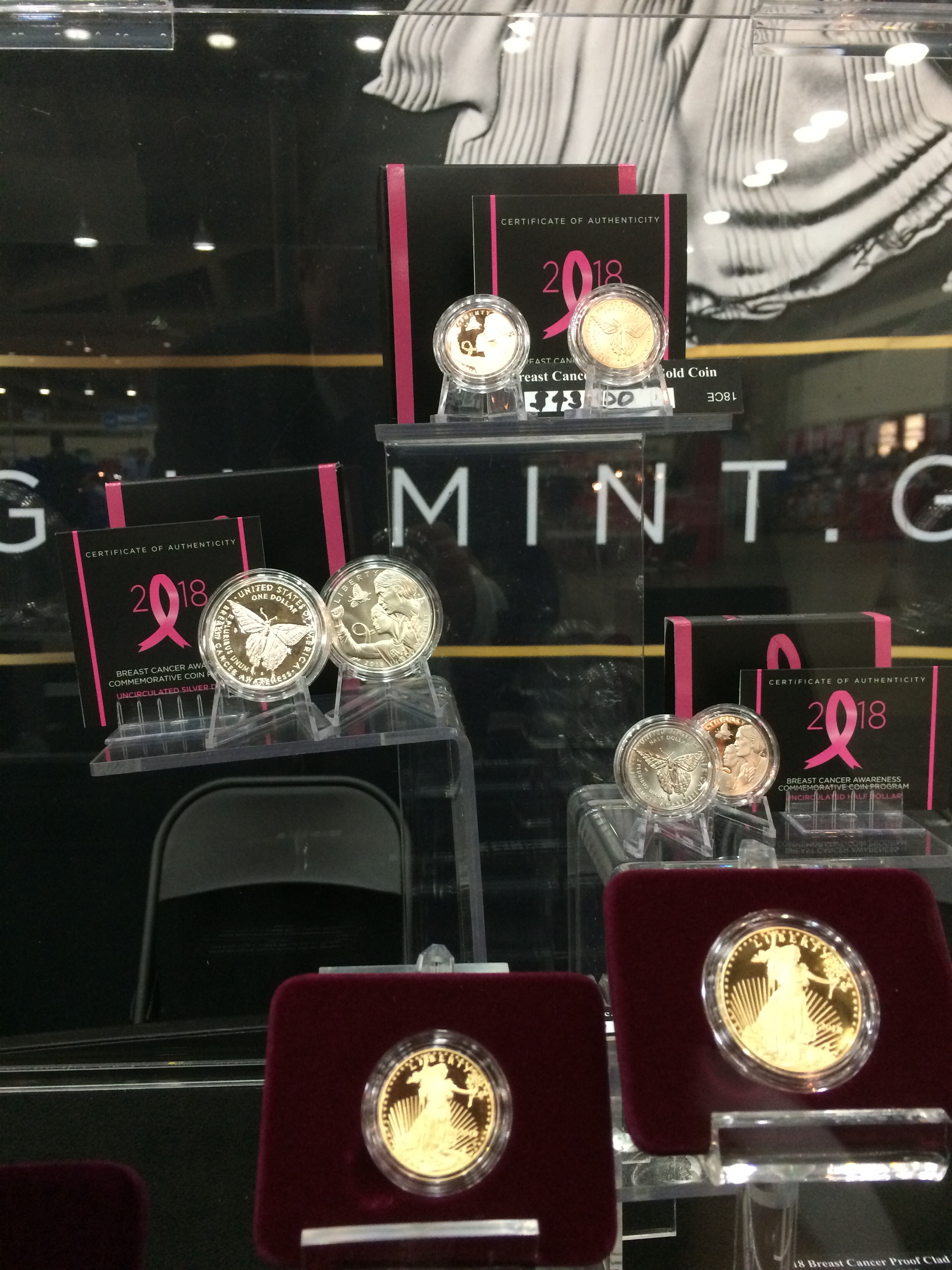 2018 Breast Cancer Awareness commemoratives and other coins are in the U.S Mint display cases. Hover to zoom. 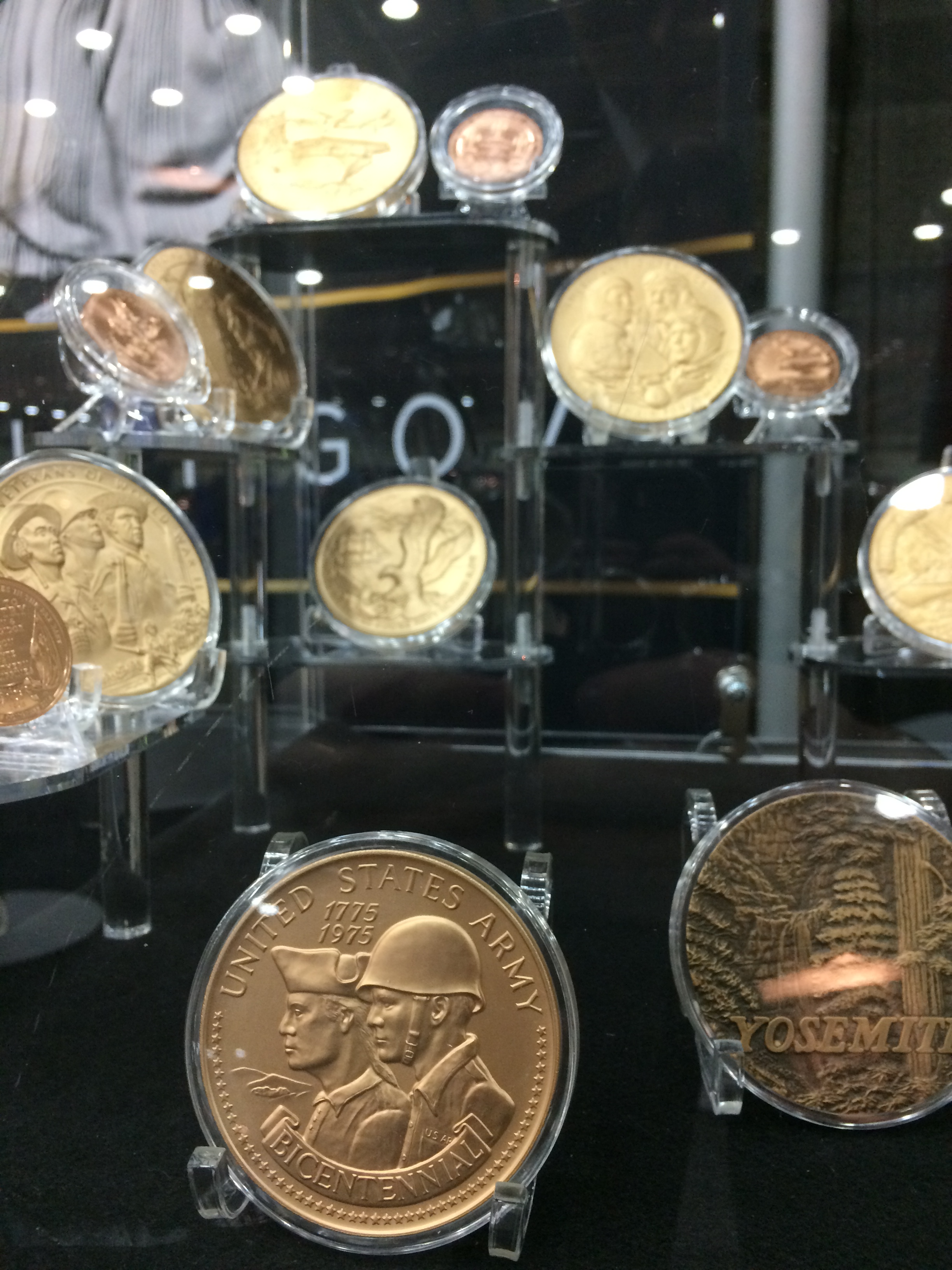 A selection of collectible bronze medals is available from the Mint. Many of these are pictured in a newly illustrated appendix in this year’s 72nd-edition Red Book and the 4th edition of Mega Red. 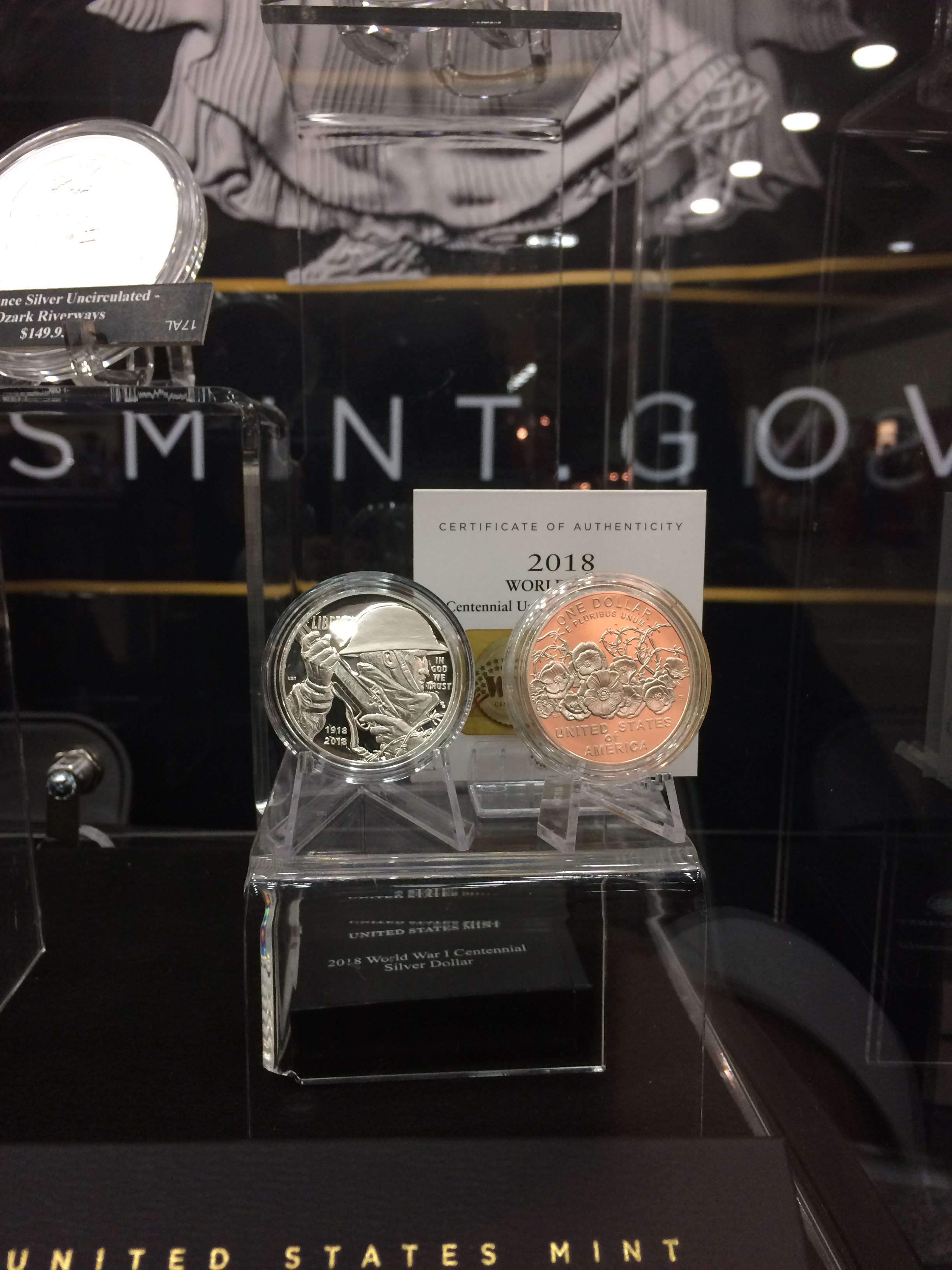 The Mint’s new World War I Centennial silver dollar is a poignant memento of the “War to End All War.” 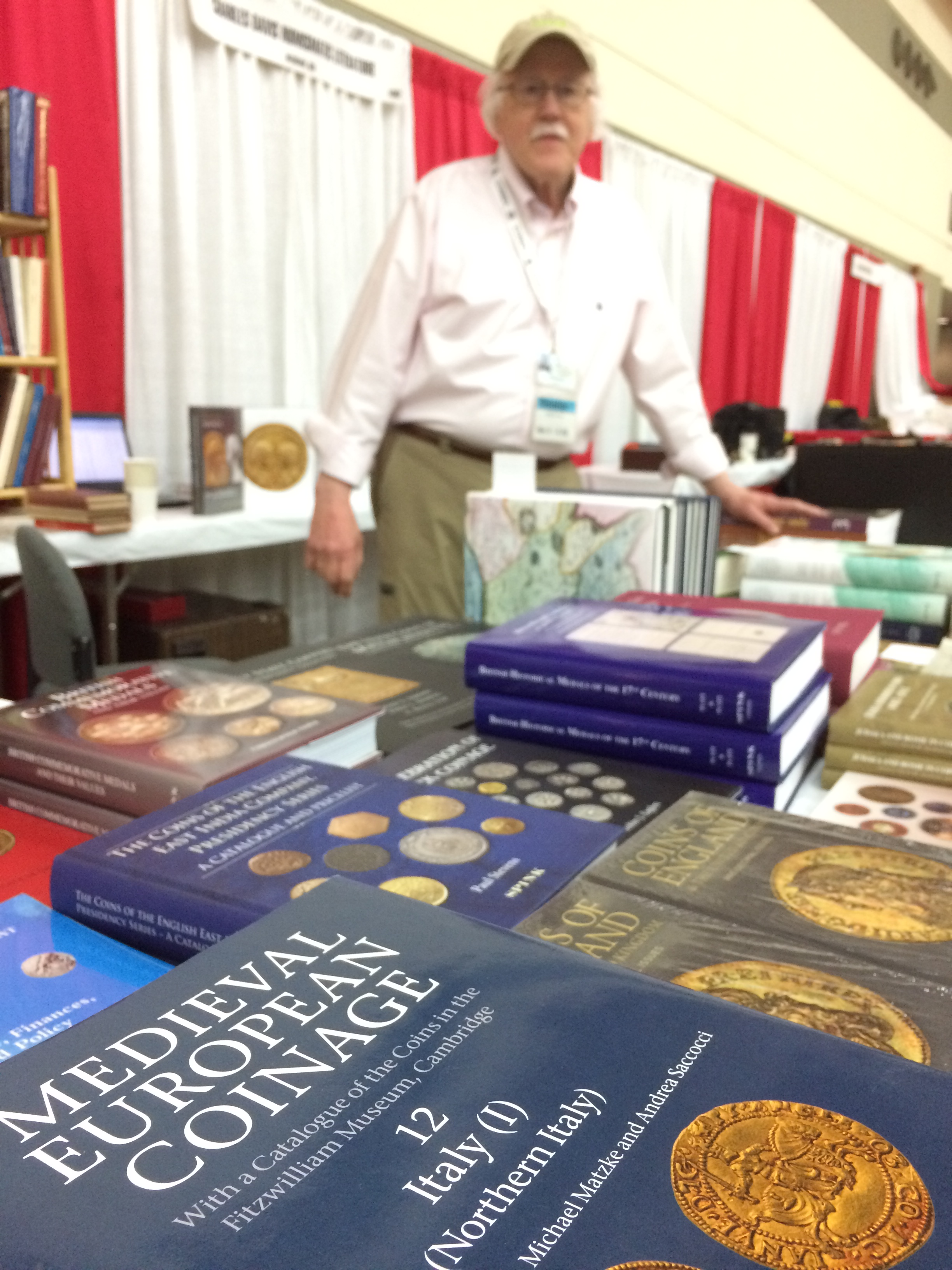 Literature dealer Charles Davis is an active member of the Numismatic Bibliomania Society. Visit his booth to see what’s going on in the world of numismatic books. His show inventory is heavy on world coins, ancients, and medals, but he has access to all genres and fields. 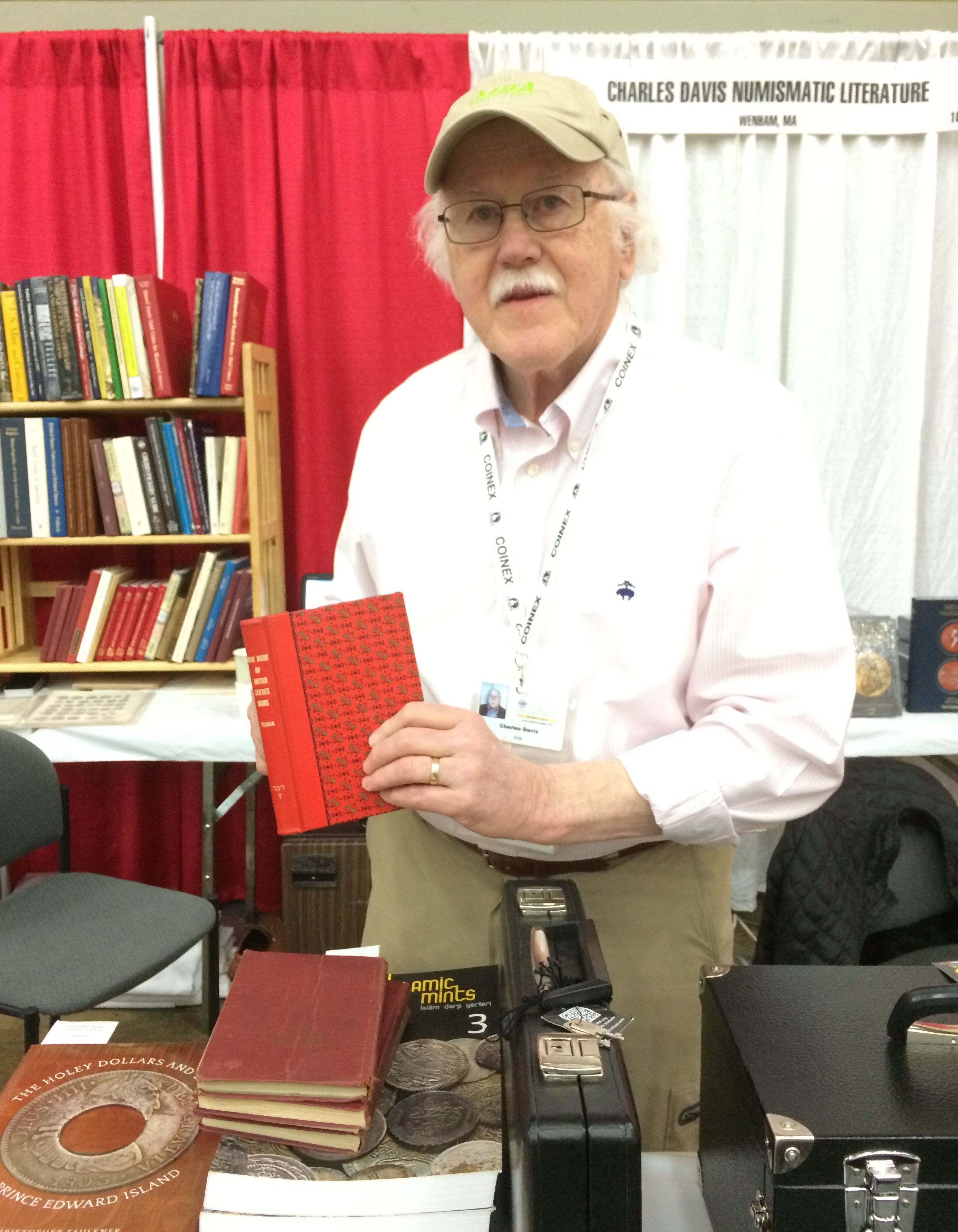 Davis shows off a rare 1947 edition of the Guide Book of United States Coins. This copy of the premier edition of the hobby’s popular “Red Book” has a library binding, complete with Dewey Decimal notation, from an Indiana library. 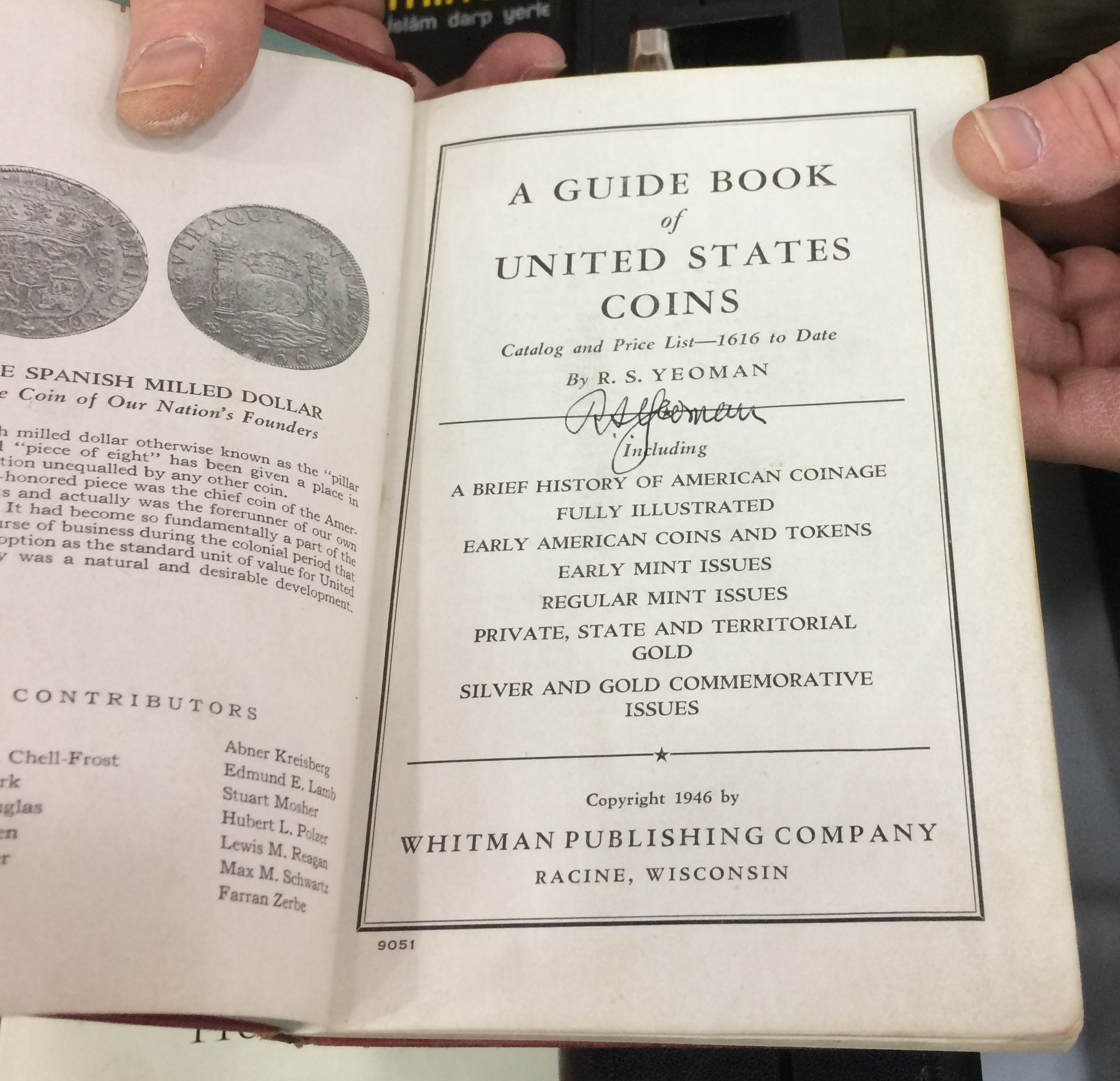 Davis calls this copy of the 1947 Red Book one of the worst-condition examples he’s seen. Its hard cover is crumpled and its best days are long gone. However, it does feature a Holy Grail of numismatic literature: the autograph of author R.S. Yeoman. Better-condition copies can be worth $2,000 or more, and Yeoman’s signature adds significantly to their value. 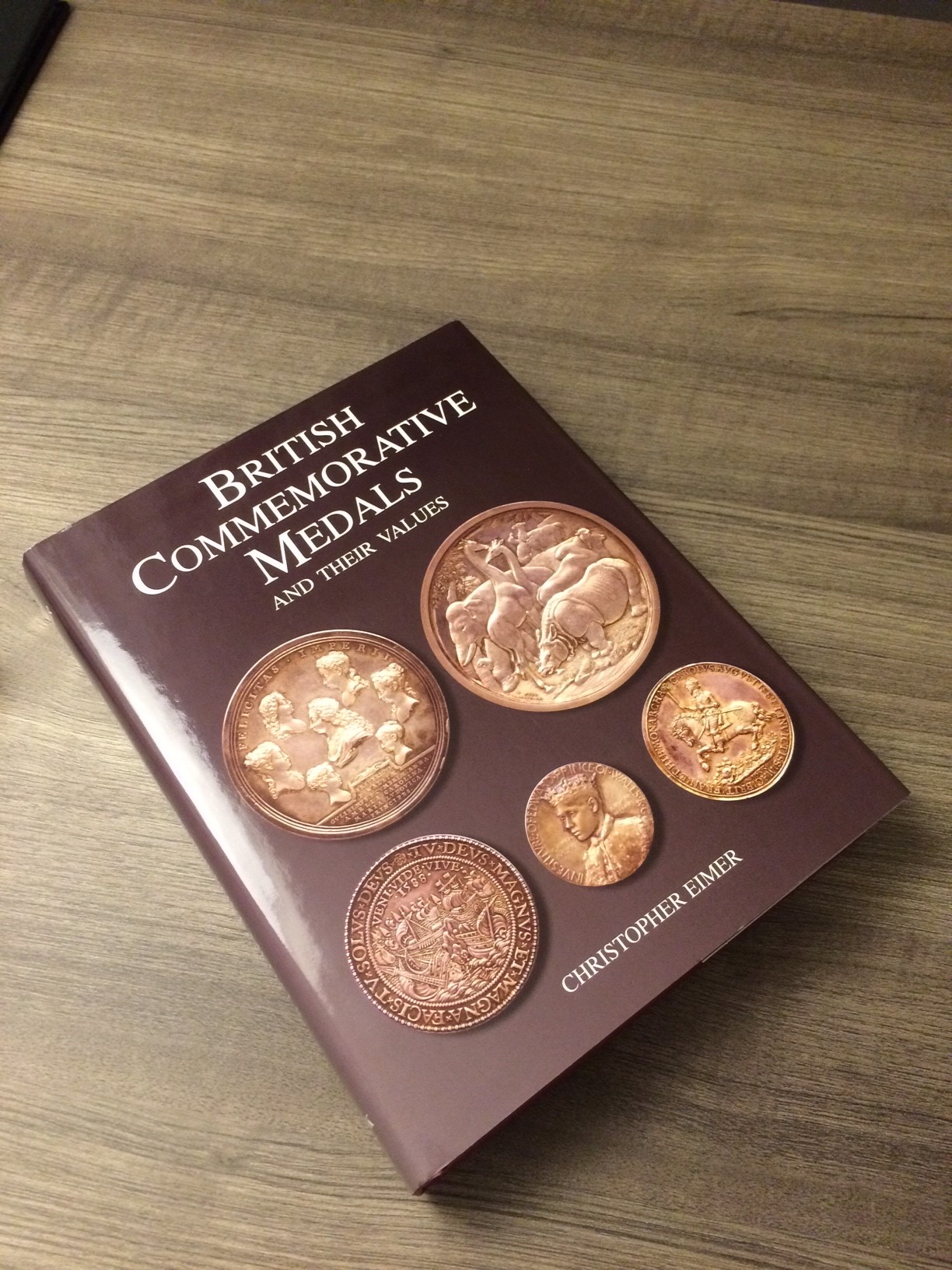 British Commemorative Medals and Their Values, by Christopher Eimer—a new book for my personal numismatic library. 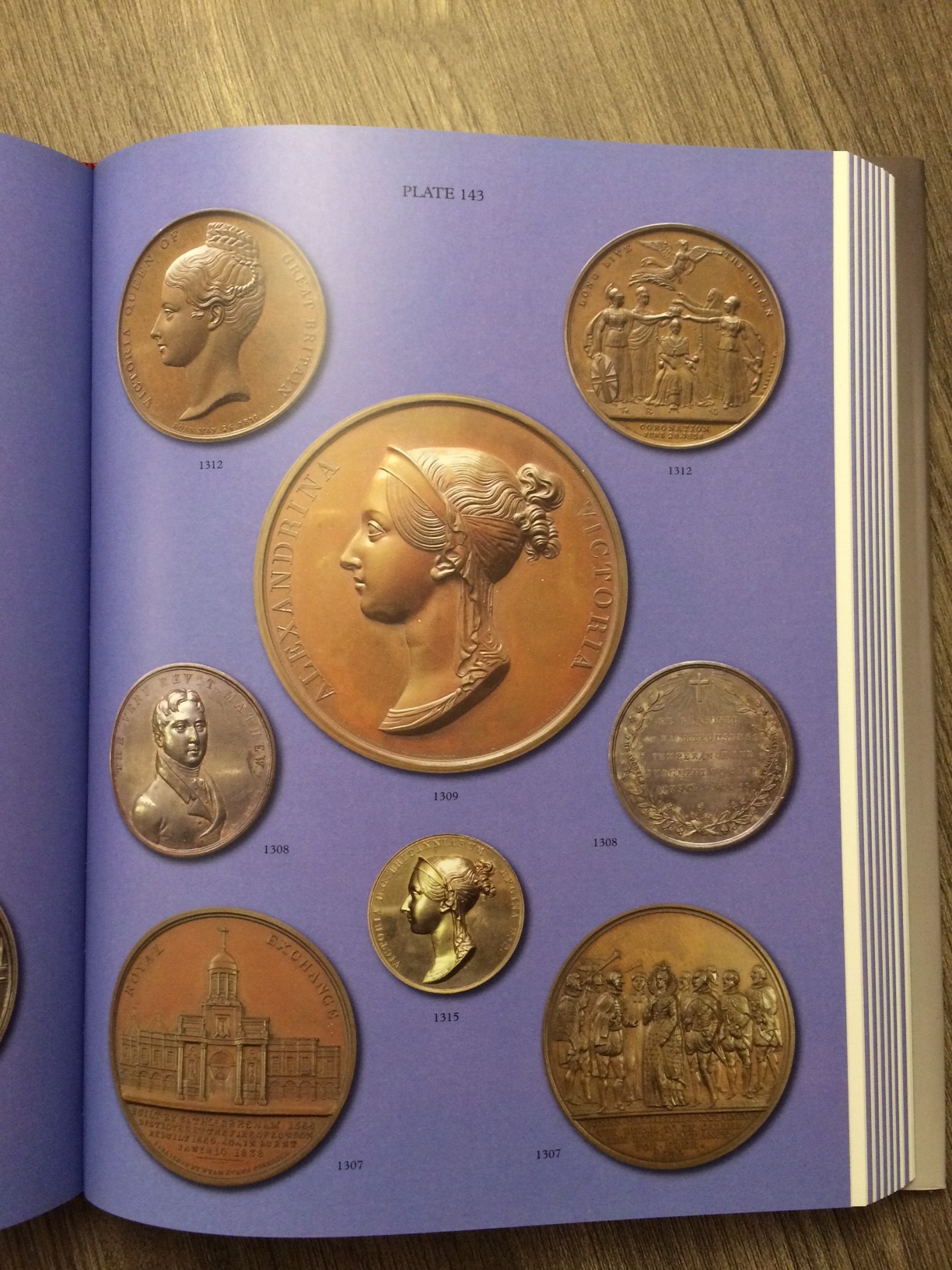 Eimer’s book takes me back to one of the first non–United States coin references I read as a young collector: Kenneth Bressett’s Guide Book of English Coins. 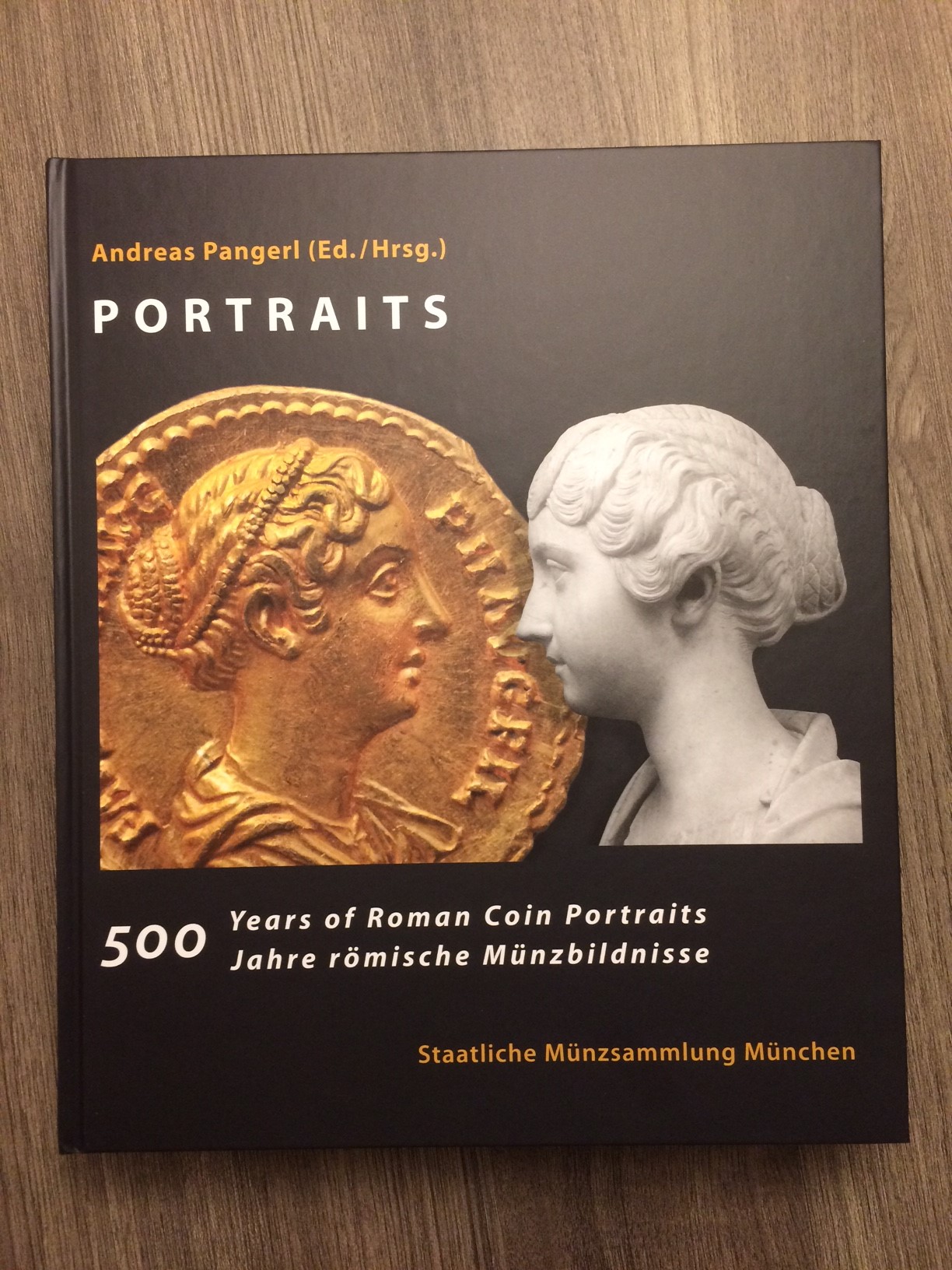 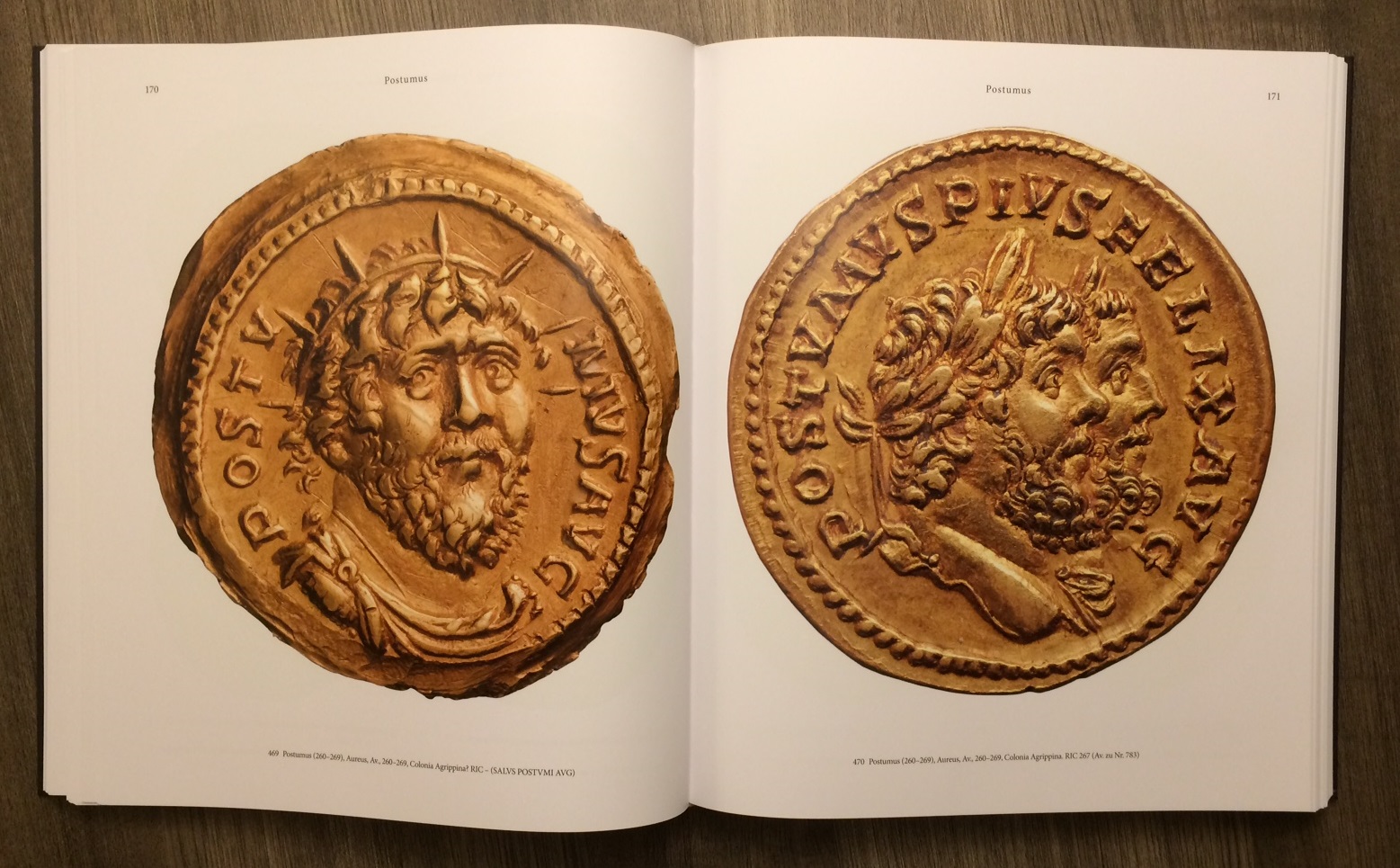 Samples of the remarkable photography in Portraits, published by Staatliche Münzsammlung München. 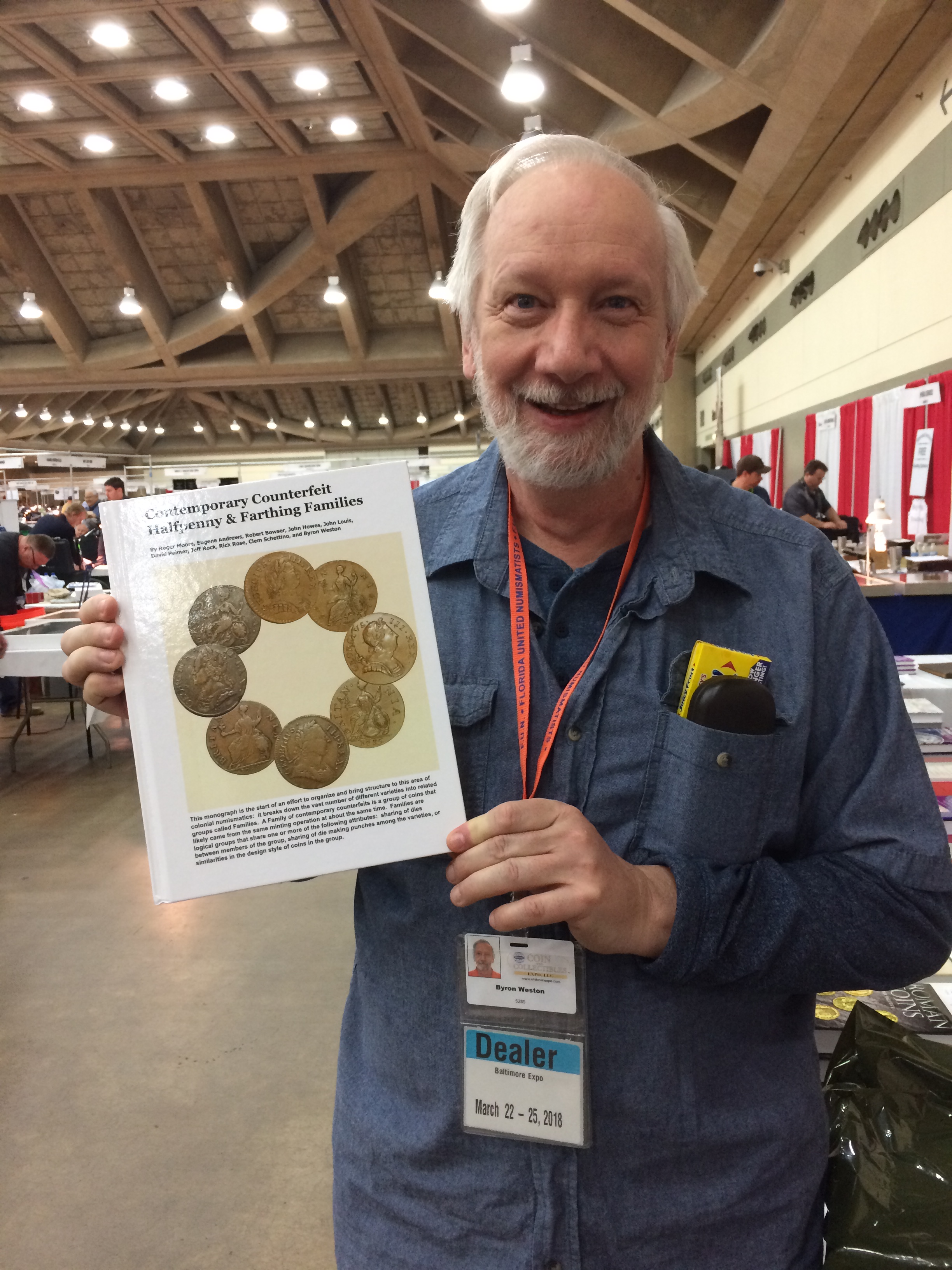 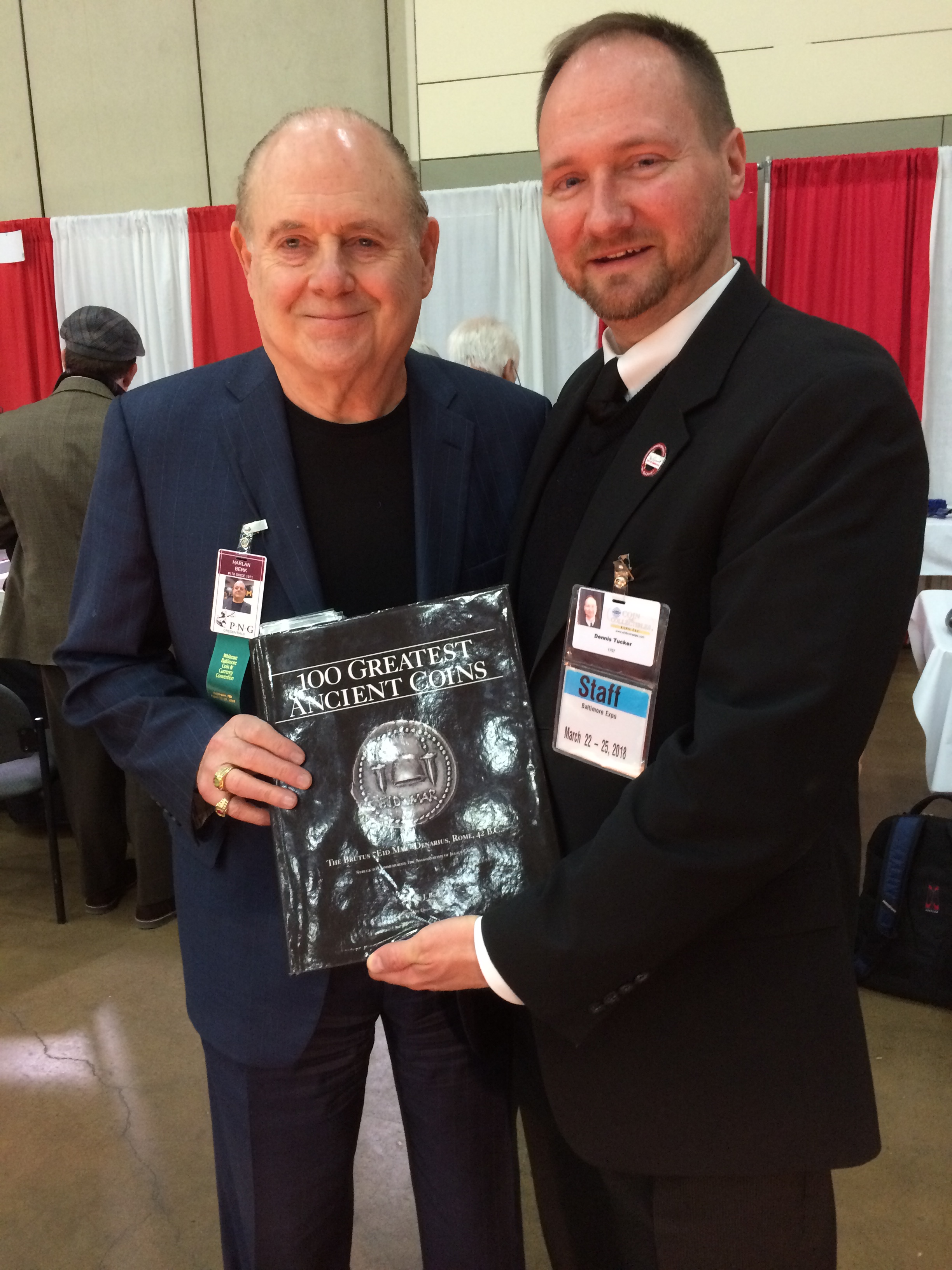 Harlan Berk shared with me a heavily annotated copy of the first edition of his book 100 Greatest Ancient Coins, which has inspired many collectors to enter fascinating new fields. We’re in the process of updating to a second edition. 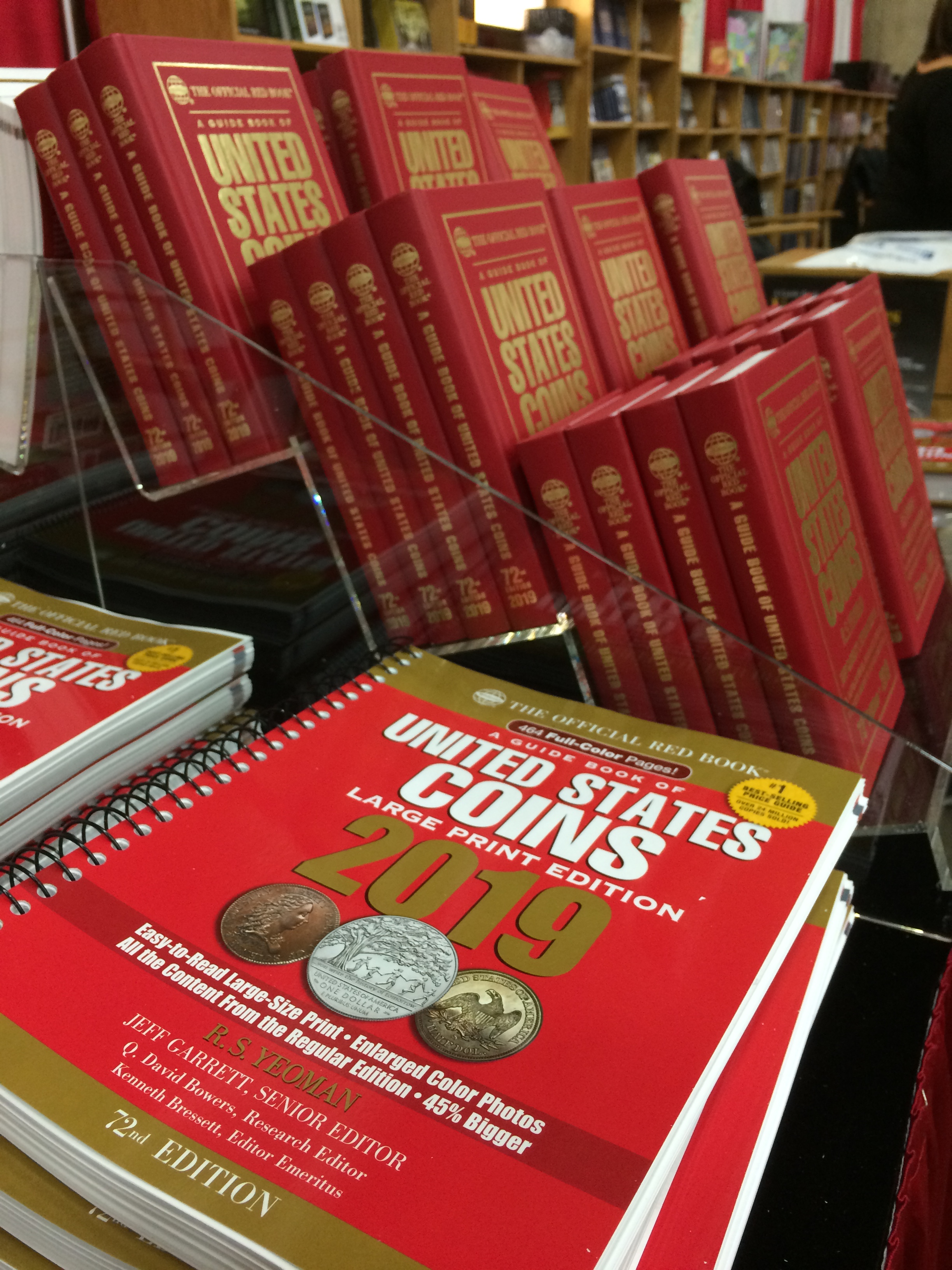 There’s something magical about each year’s first display of Red Books. 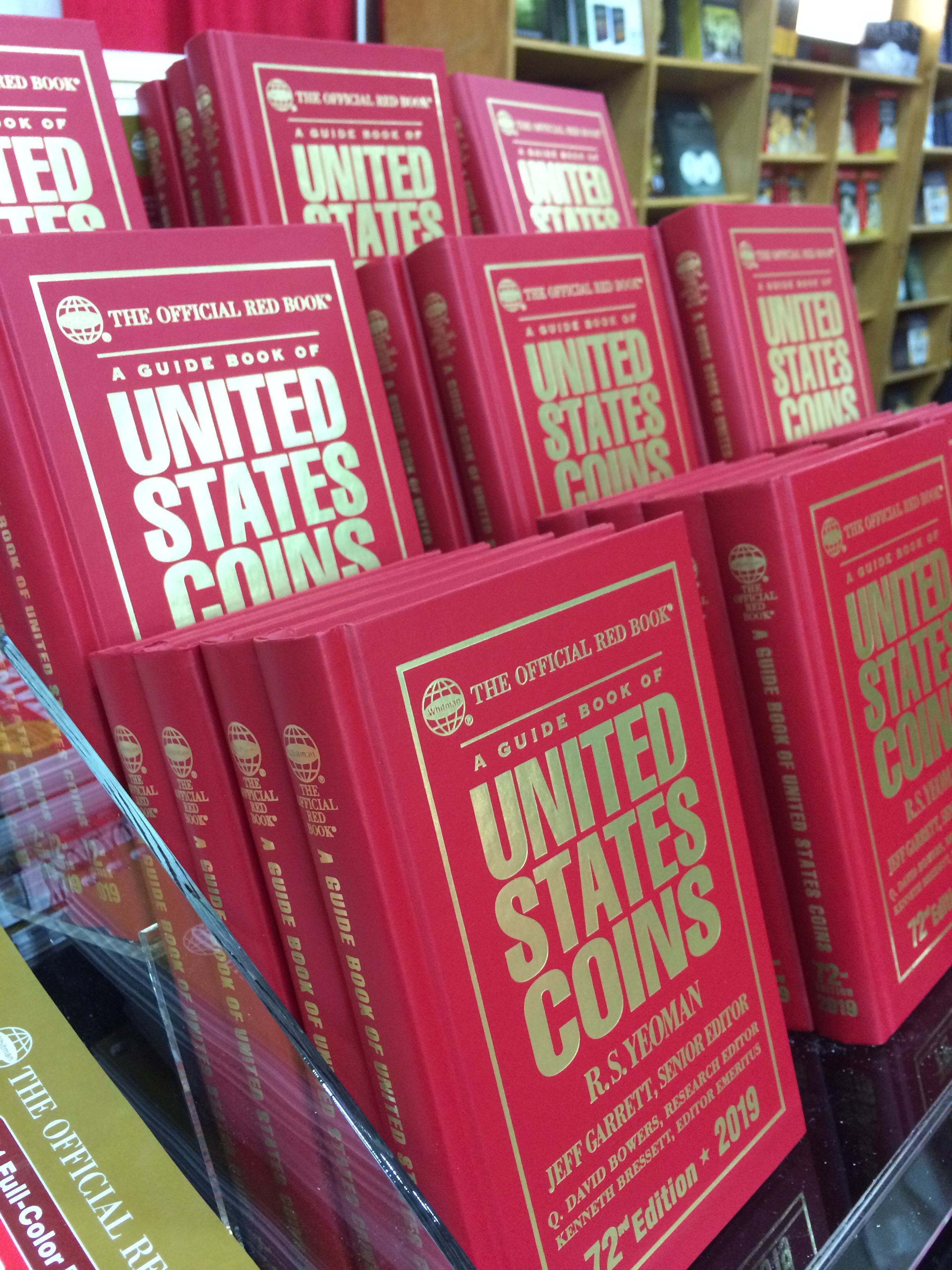 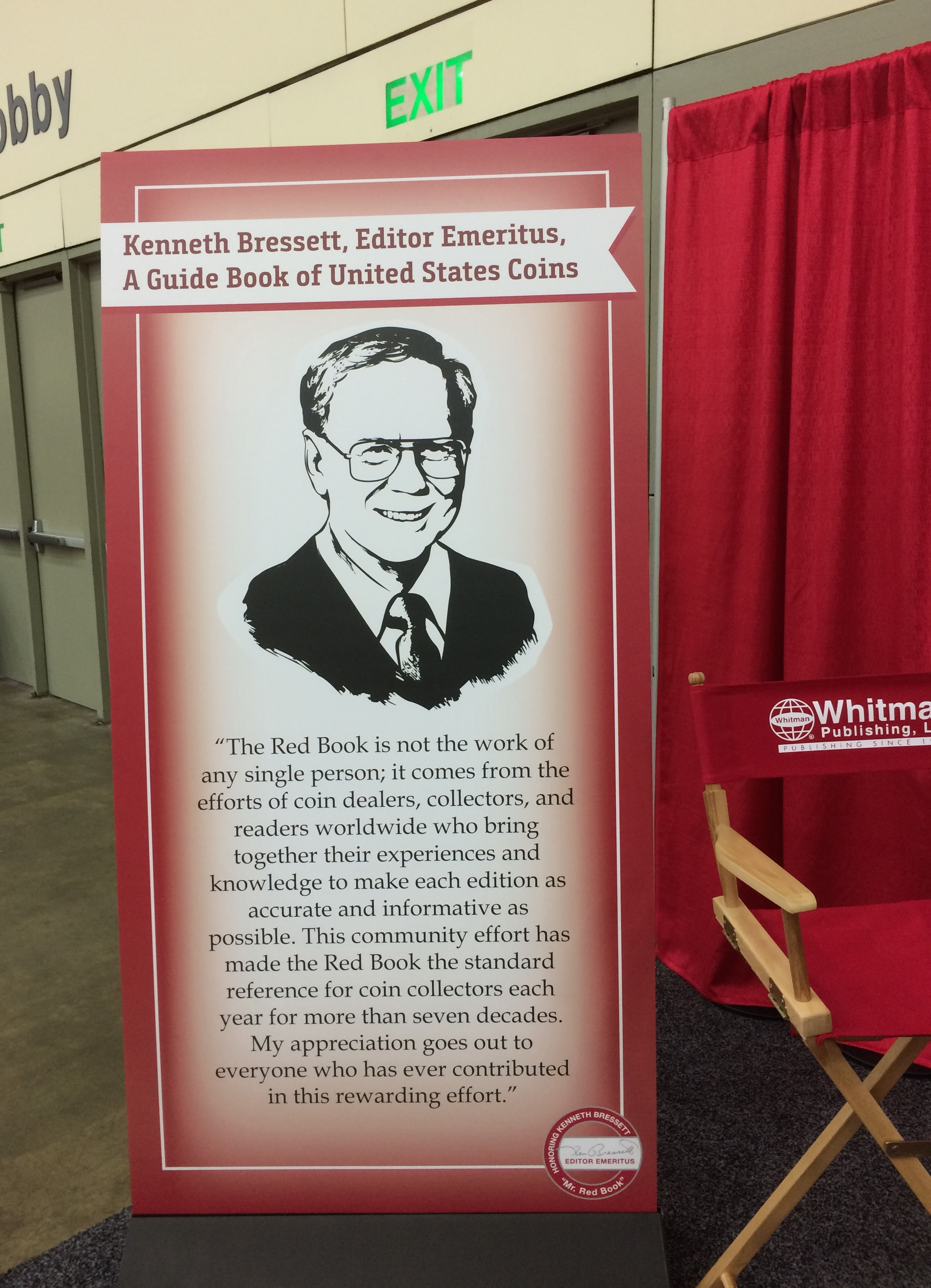 What does “retirement” mean when you’re as connected to your work as Ken Bressett has been to the Guide Book of United States Coins for nearly 60 years? I don’t think we’ve heard the last of “Mr. Red Book”! 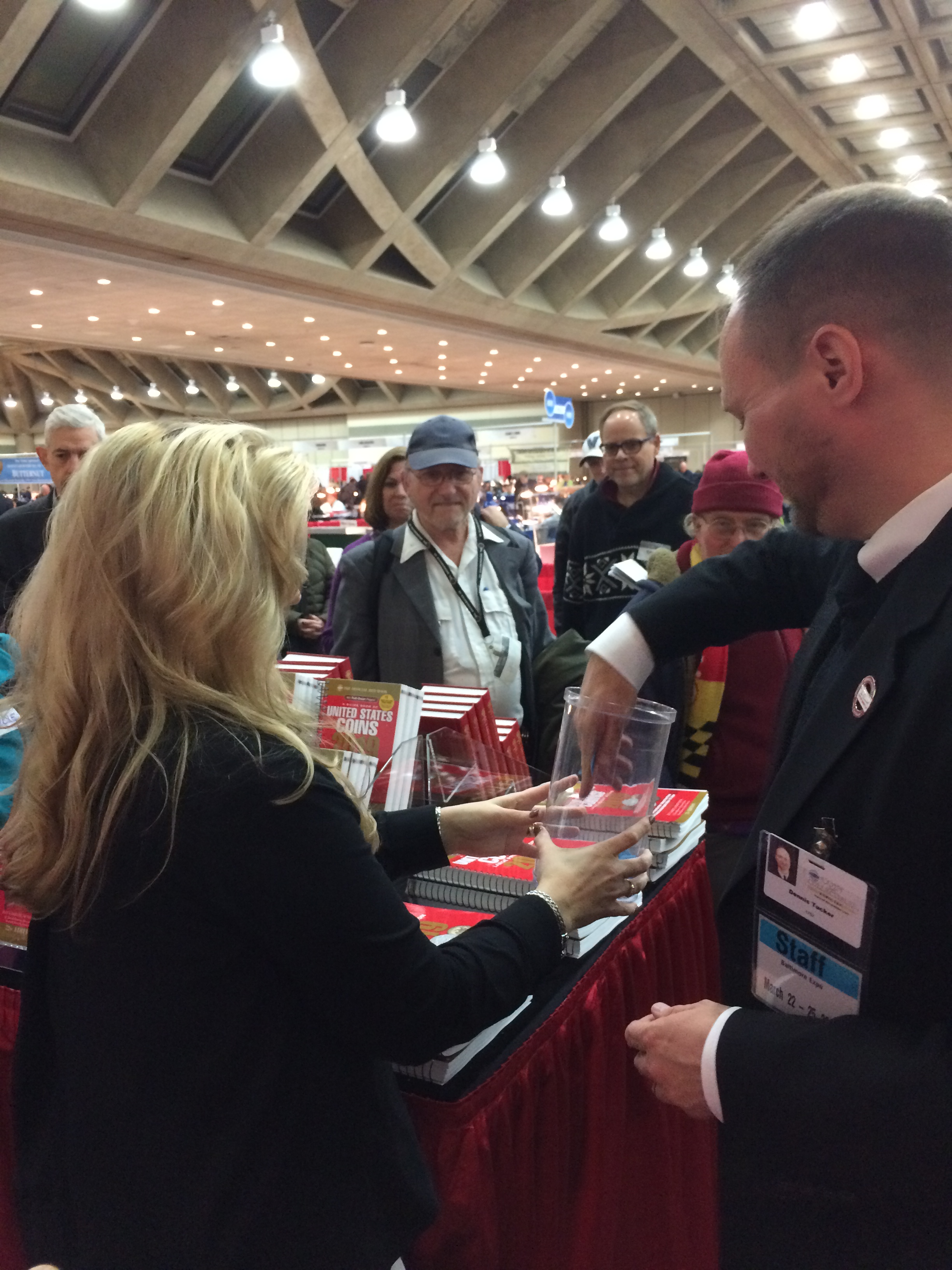 Drawing the winning tickets for ten brand-new copies of the 2019 hardcover Red Book—twice daily, at 2:00 and 4:00 at the Whitman Publishing booth, Thursday and Friday. 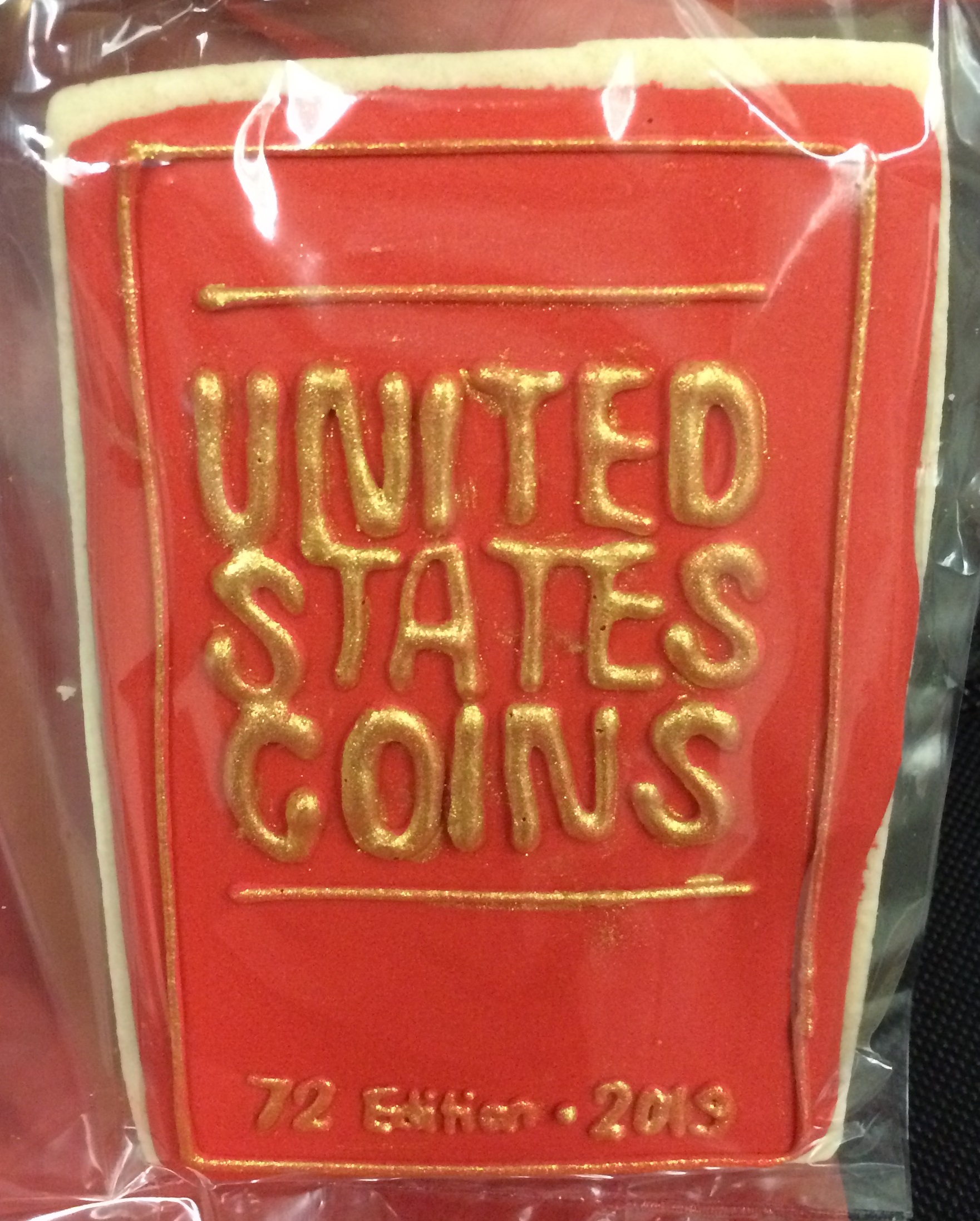 Where else but at the Whitman Baltimore Expo will you find these commemorative Red Book cookies? 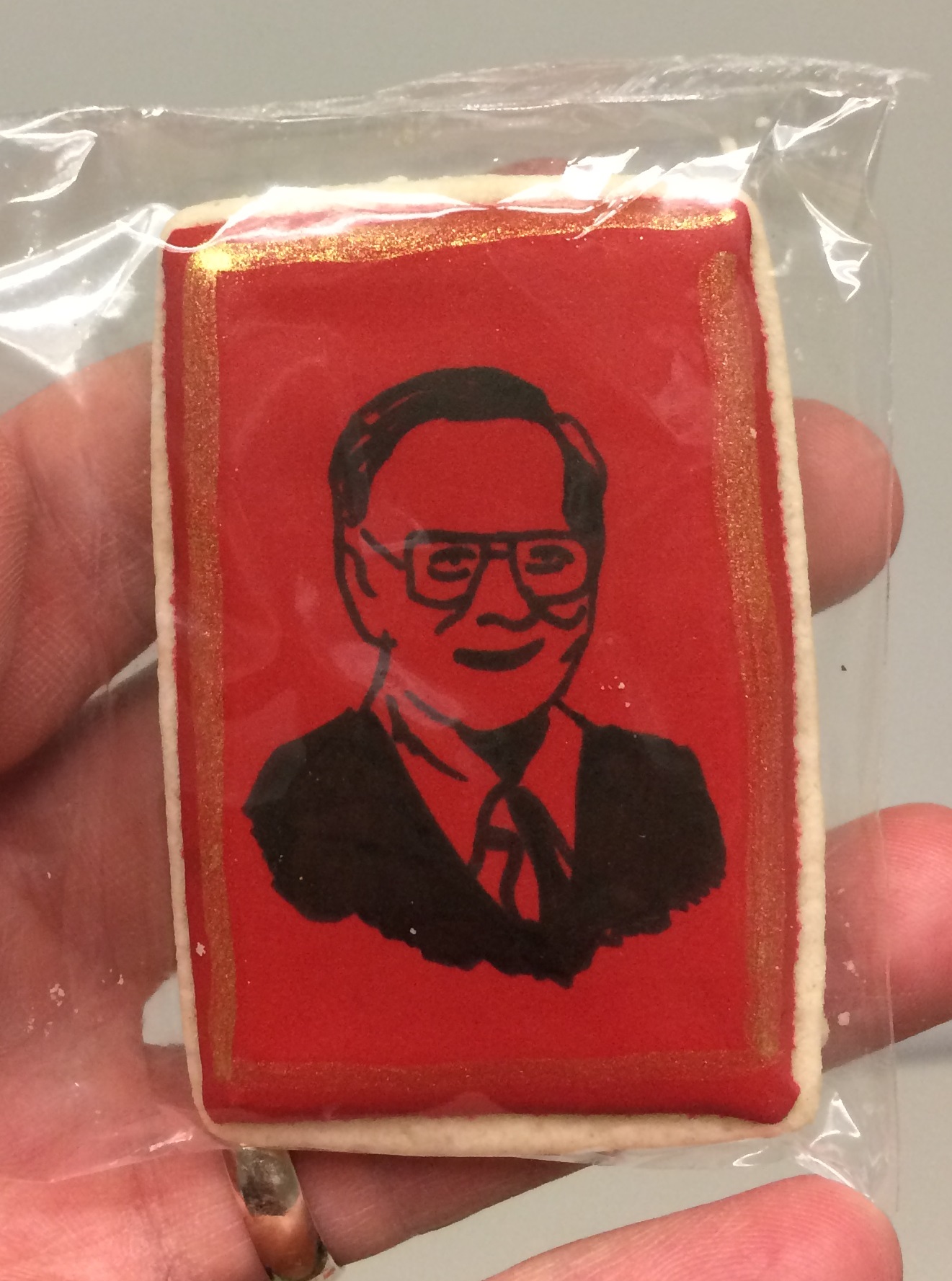 I half-expect to see these cookies slabbed and selling on eBay next week. 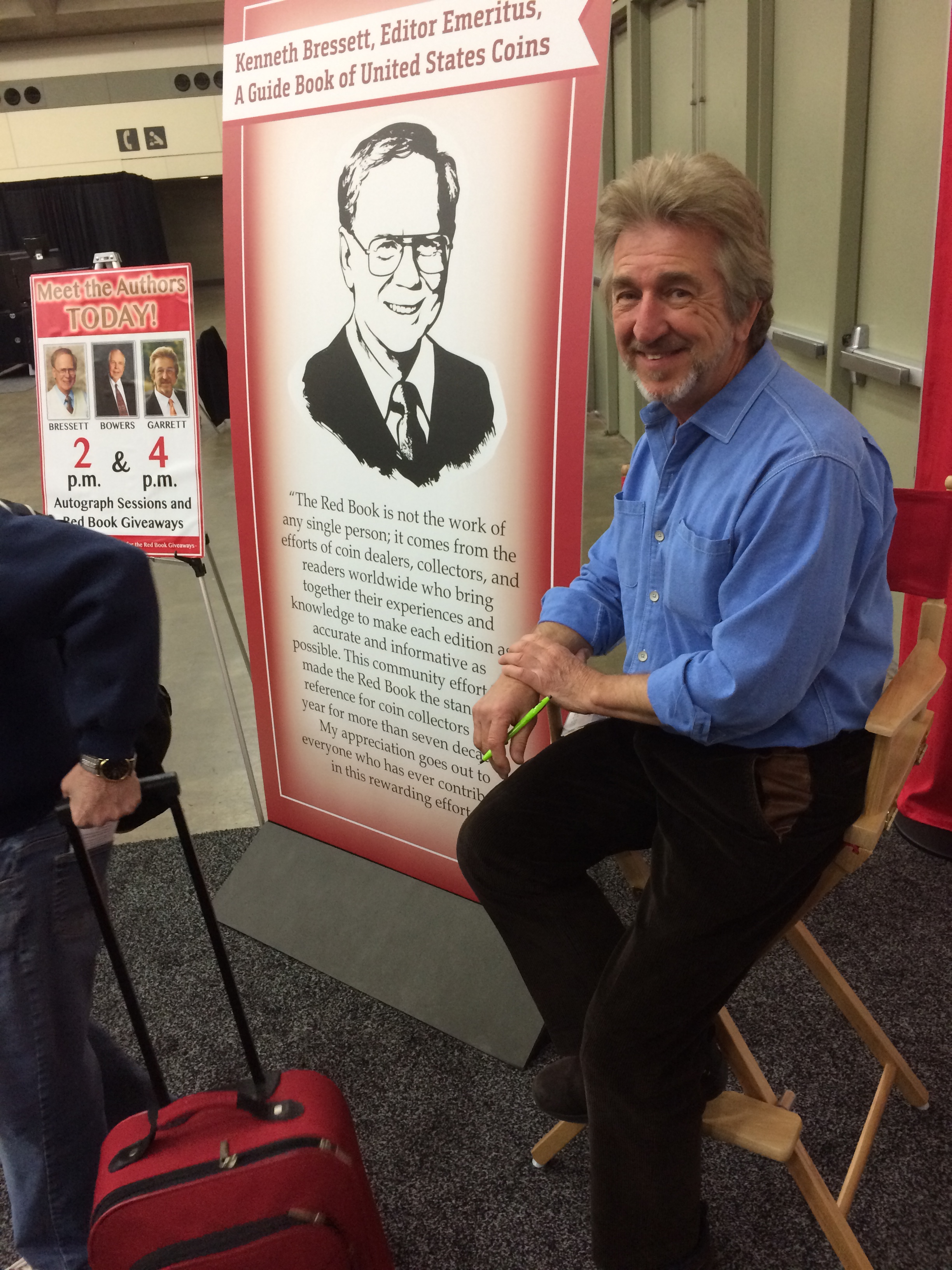 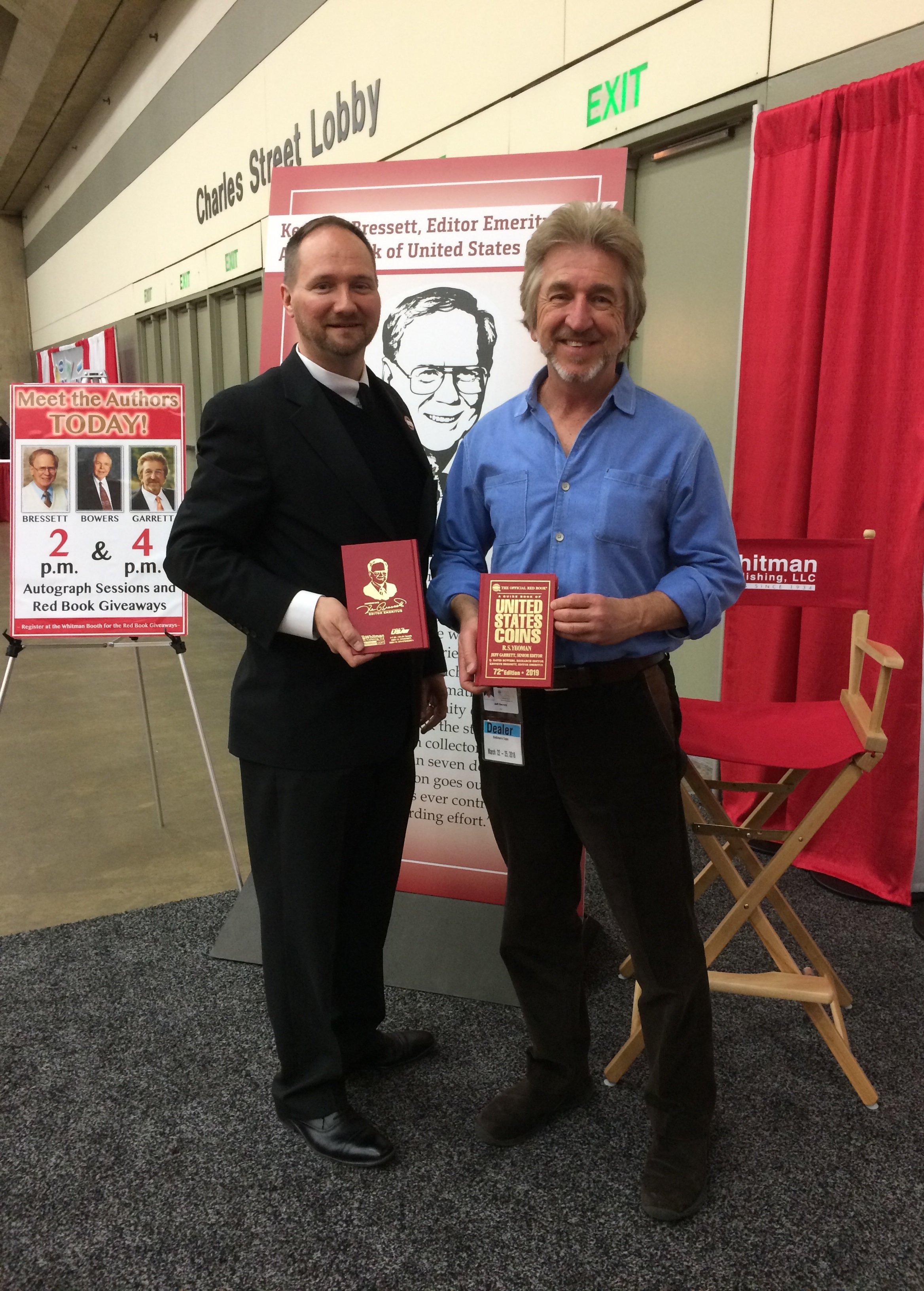 Jeff Garrett, with the 2019 (72nd) edition Red Book. In 2012 Jeff was recognized with the title of valuations editor, for his yeoman contributions to the book’s thousands of coin-by-coin prices. 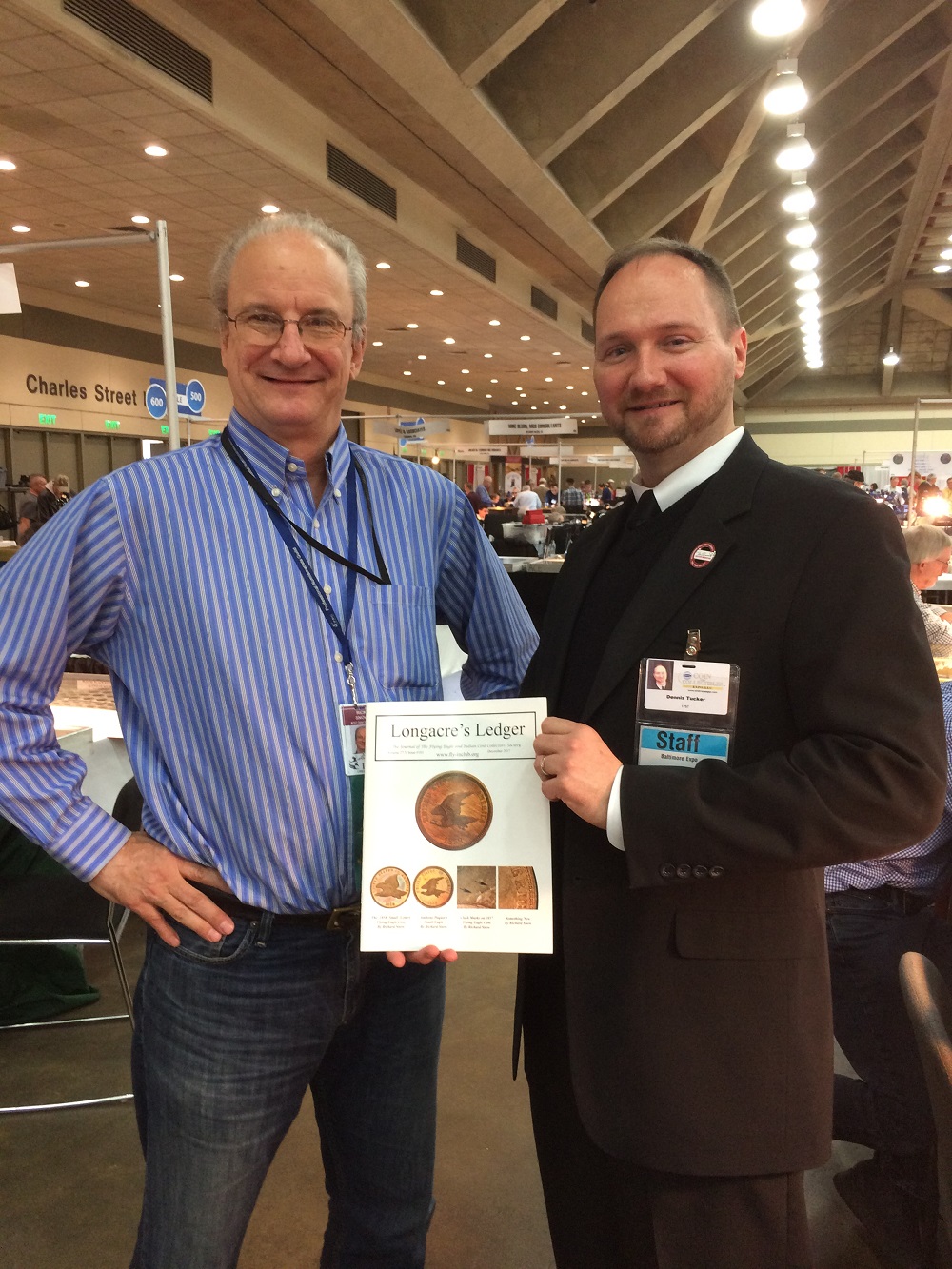 Professional numismatist, award-winning writer, and groundbreaking researcher Rick Snow is the editor of Longacre’s Ledger, the journal of the Flying Eagle and Indian Cent Collectors Society. 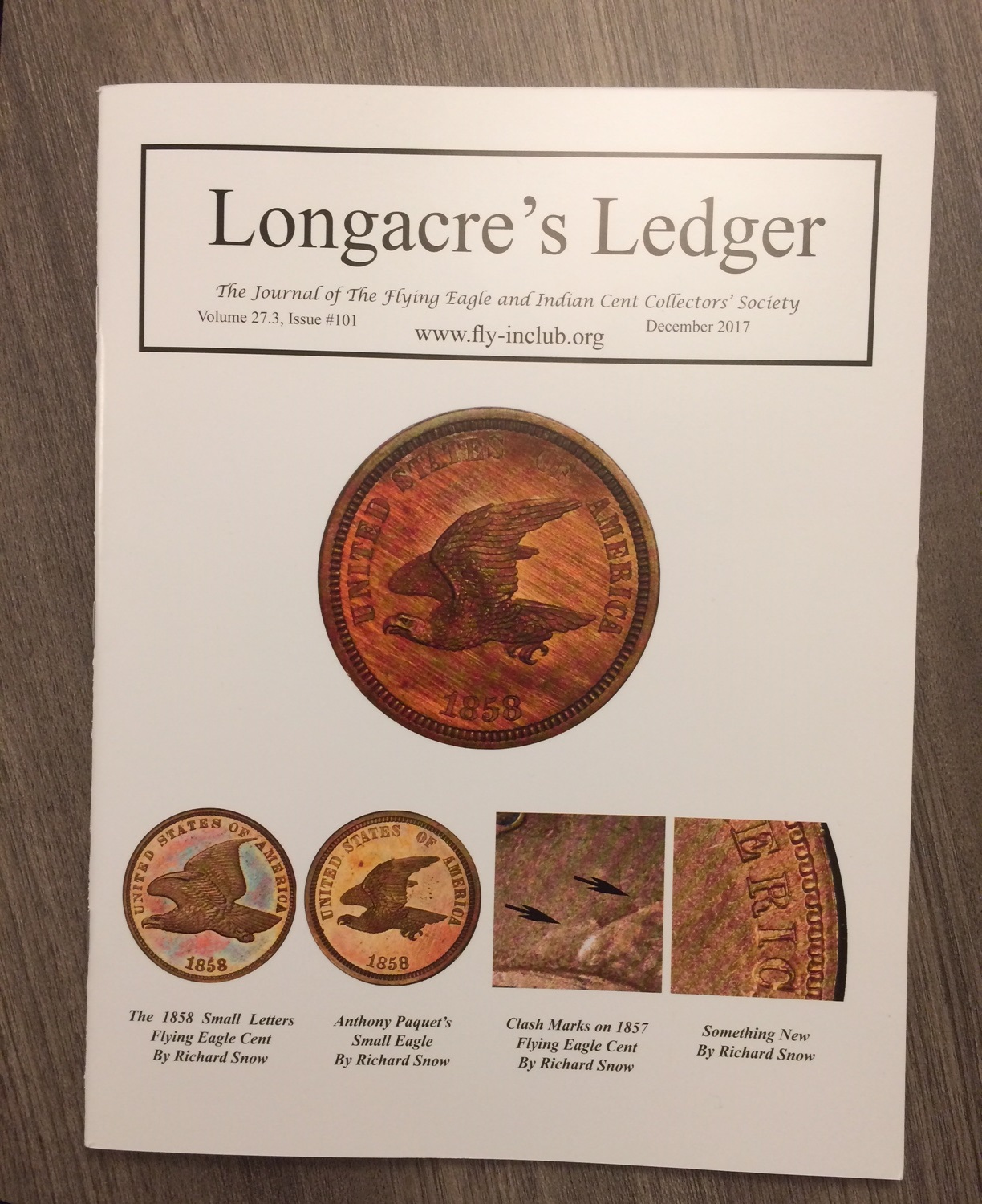 The “Longacre” in the magazine’s title is James B. Longacre, a prolific 19th-century coin designer and engraver for the United States Mint. 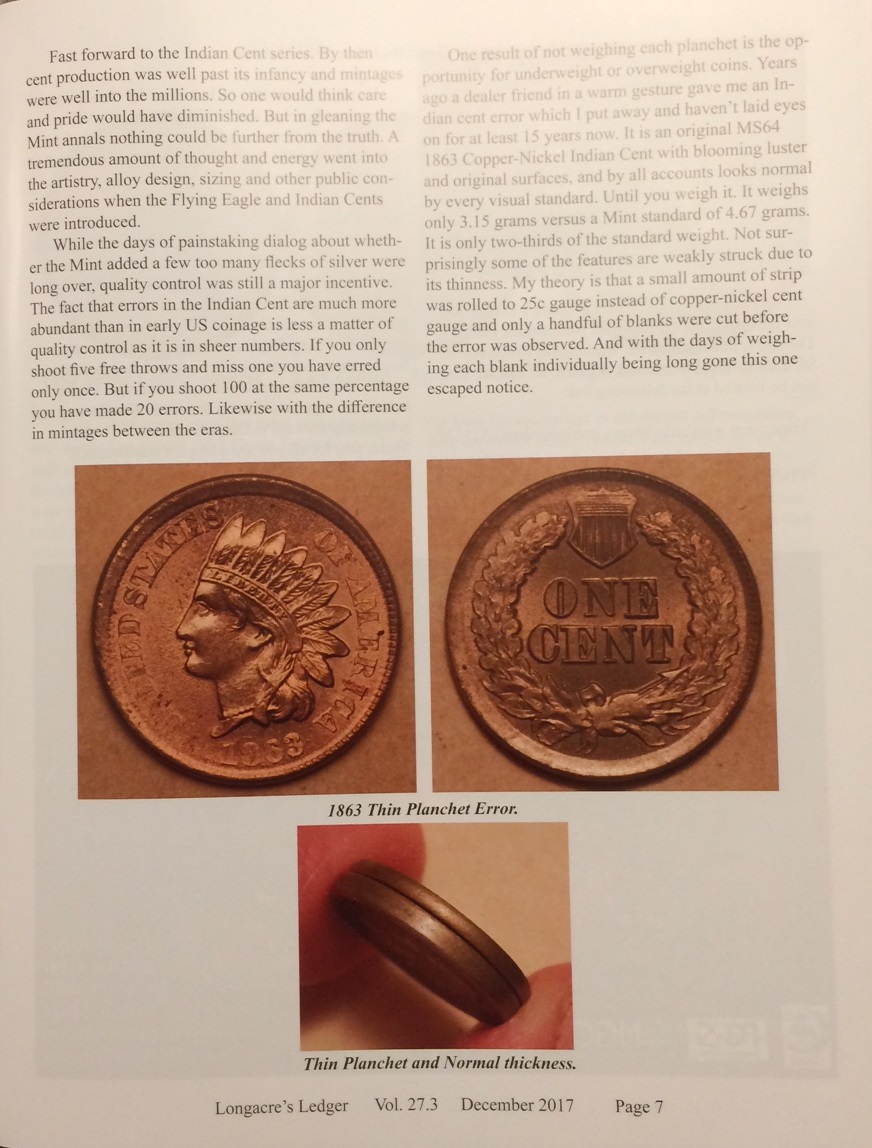 Journal editor Rick Snow is the author of Whitman’s award-winning Guide Book of Flying Eagle and Indian Head Cents, which has been published in several editions. 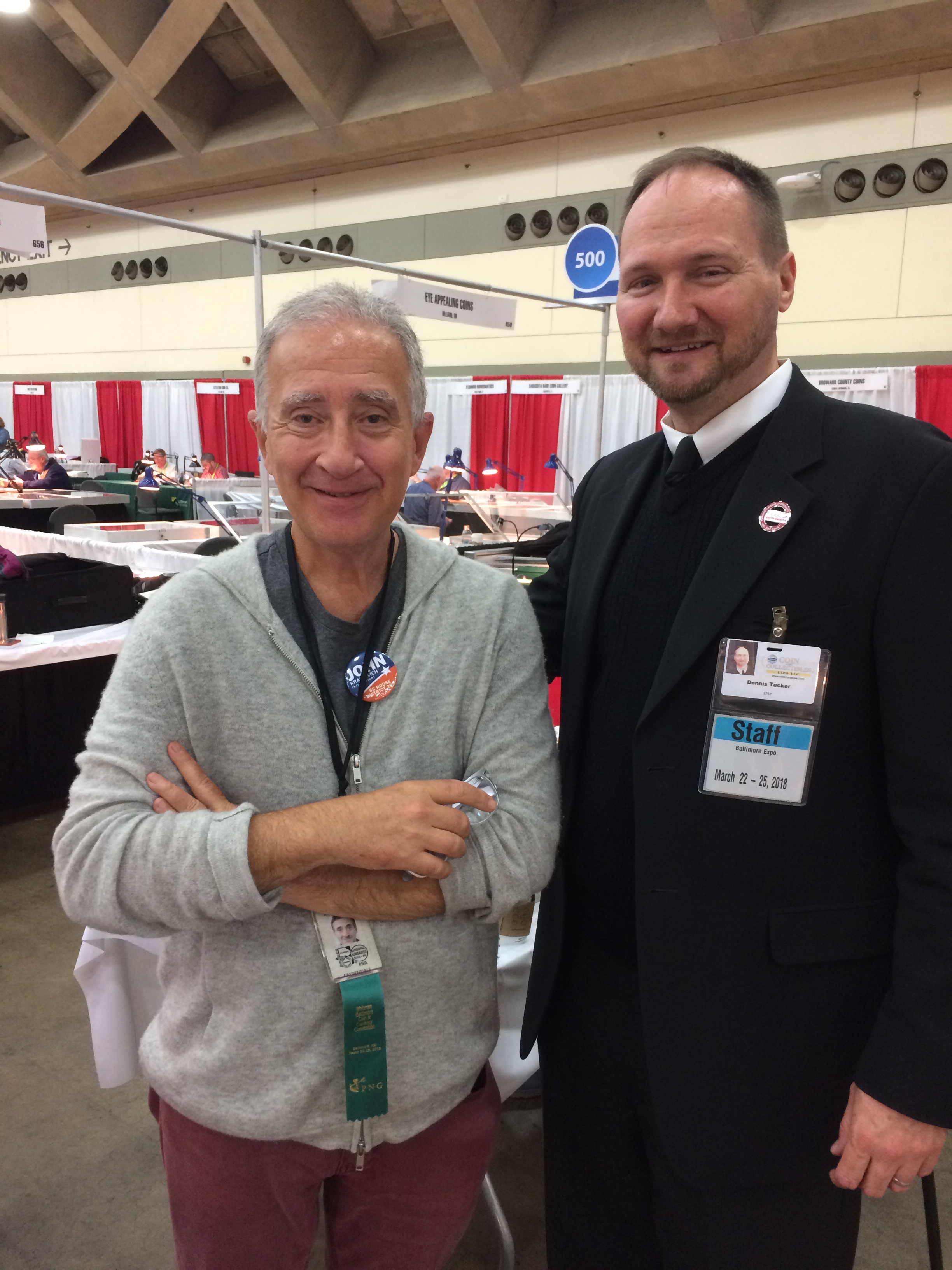 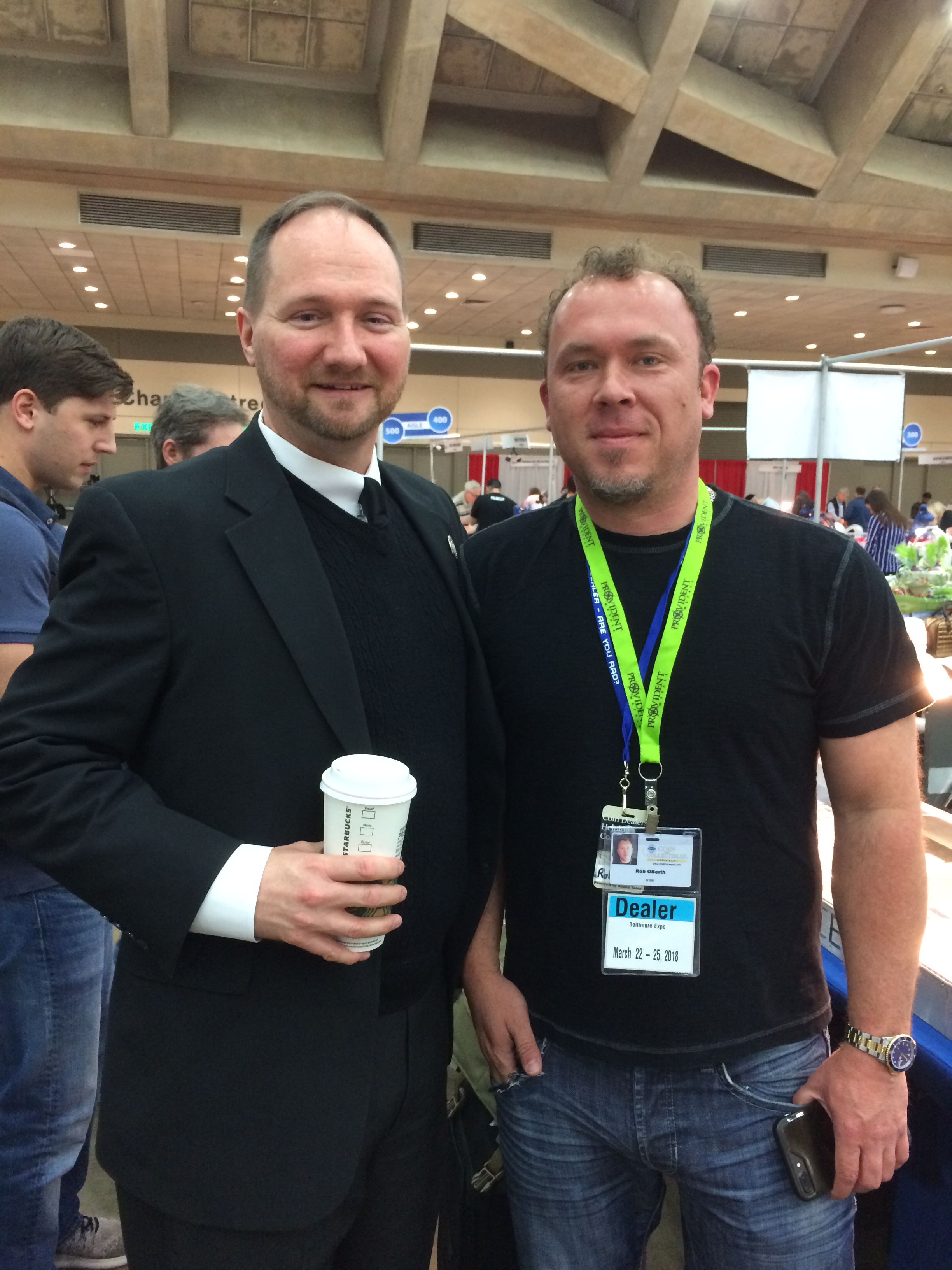 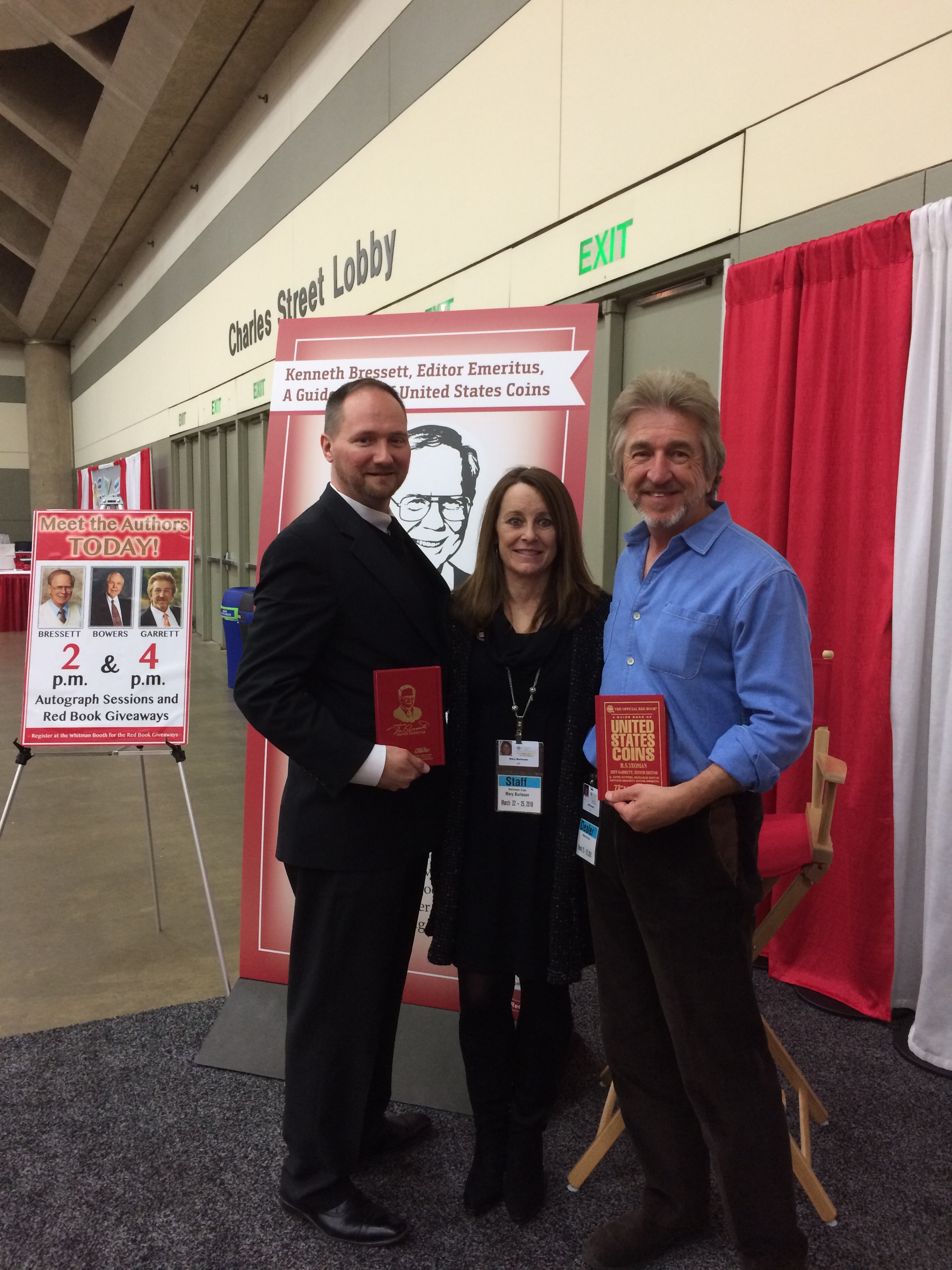 Whitman president Mary Burleson was recognized with the Elvira Clain-Stefanelli Memorial Award for Achievement in Numismatics at the 2016 ANA convention. The award is presented in recognition of a female numismatist’s lifetime accomplishments in the field. 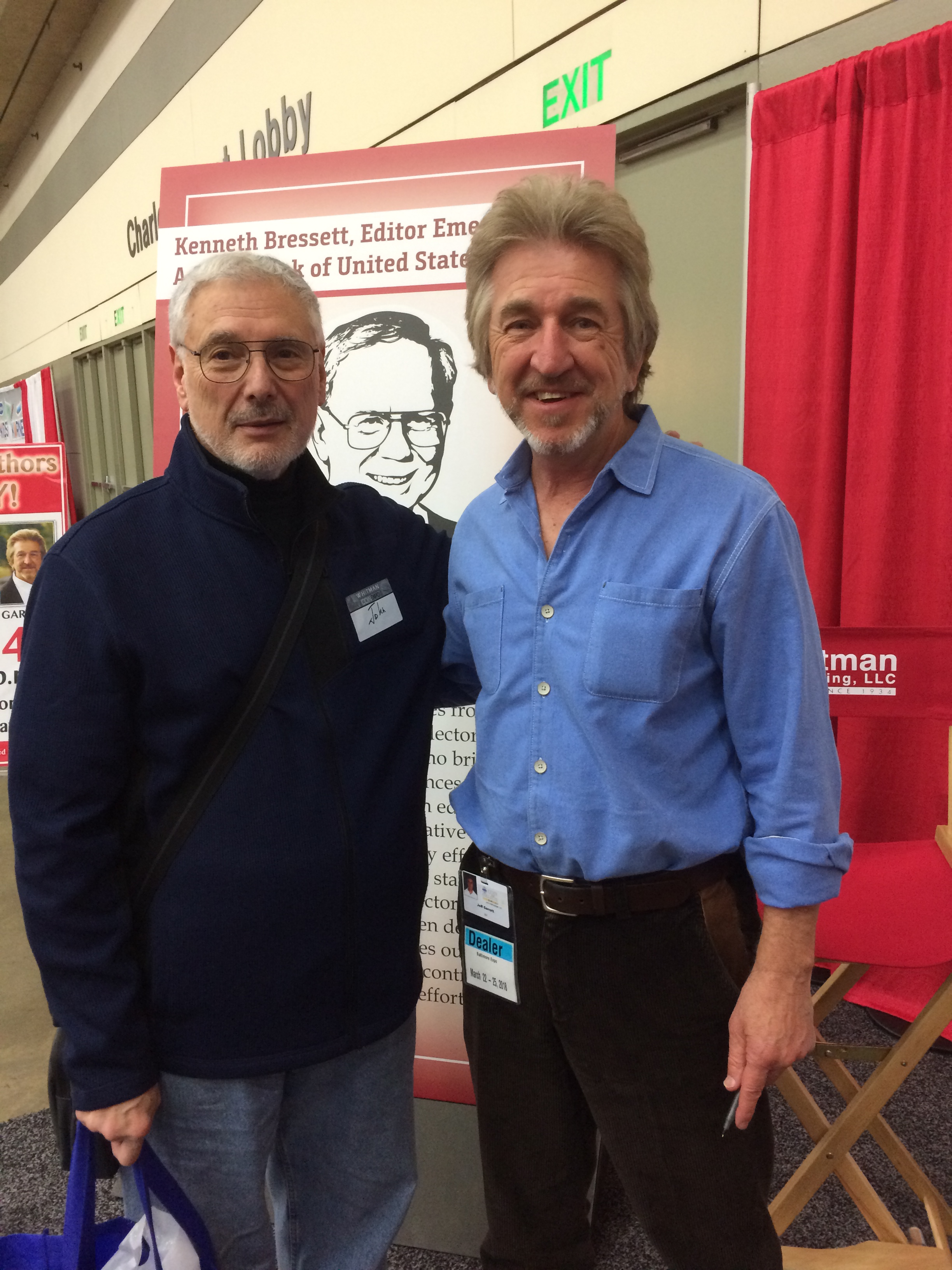 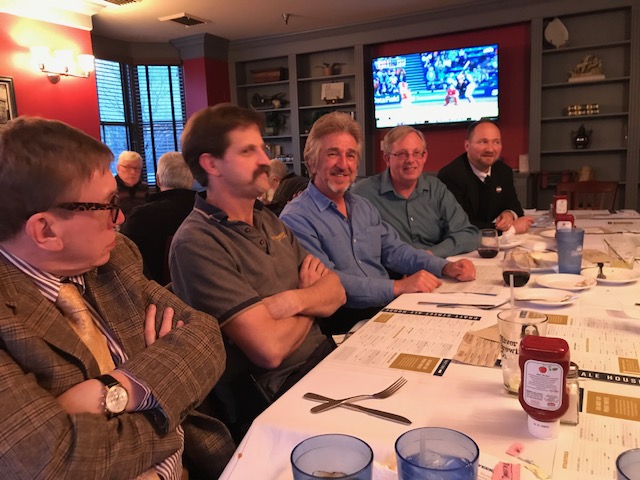 Part of the fun of the Baltimore Expo is the chance to socialize with old friends and make new ones. Groups such as Nummis Nova, Coin Dealers Helping Coin Dealers, the Liberty Seated Collectors Club, the Barber Coin Collectors Society, the Early American Coppers Club, and the Maryland Token and Medal Society meet in the convention center or in the many fine local dining establishments and social houses to share knowledge, talk about the hobby, catch up on new developments, make connections, and just relax and have a good time.