In the year 2000, redesigned banknotes were introduced with an updated portrait of Queen Elizabeth II, modified design features, and improved security devices. This series, identified in the Pick book by numbers 50 through 55, is mostly found with the 2000 date, although the $2, $10, and $50 denominations were also printed with a 2007 date. The $50 is available, but the $2 and $10 denominations are very scarce. It seems that they were printed but then saw an extremely limited number of pieces released into circulation; only a very limited supply is now available to collectors, meaning that these two notes sell for quite high prices whenever they appear at auction. Another commemorative was also printed in this series, a $50 dated 2003 (Pick-56). It features a special hologram and was printed to commemorate the 50th anniversary of the coronation of Queen Elizabeth.

A $100 note from the 2000 issue. This is the last series to include a large portrait of Queen Elizabeth II.

In 2009 the Bermuda Monetary Authority issued a completely revised series, and in January of 2014 all banknotes of the previous series were withdrawn from circulation and are no longer valid. The new series (Pick 57 through Pick 62), printed in a vertical format, features local flora and fauna on the front and local scenes on the back.  Minor modifications have been implemented since then on some denominations, but generally speaking this is the current series that is in circulation on Bermuda at the moment. While Queen Elizabeth II no longer is featured prominently on these banknotes, a small, younger portrait of her does appear on each note, in the lower left. 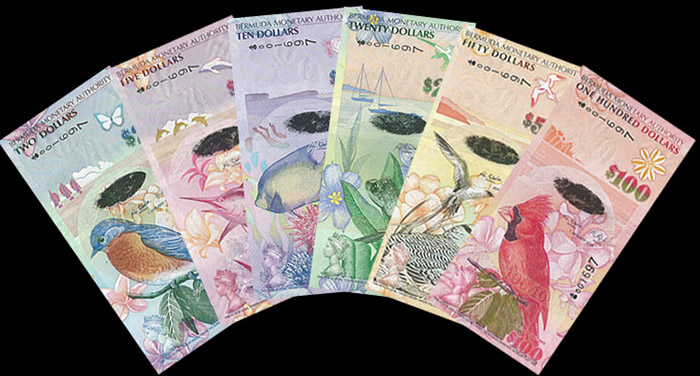 The complete 2009 Series, currently in circulation. Complete matching-serial-number sets are sold to collectors at a premium over face value.

Something to keep in mind is that the issuing authorities of Bermuda (both the Government of Bermuda and the Bermuda Monetary Authority) have had a numismatic program for years that sells new issues to collectors at a small premium above face value. These notes can generally be identified by low serial numbers, and in many cases they represent the only uncirculated examples of some types that are available to collectors. If this program had not existed, it is likely that quite a few of the high-denomination issues would be excessively rare in high grades, similar to the rarity of some banknotes from the Bahamas, where such a program never existed. Some issues, however, appear to have never been available through this program (the 2007 $2 and $10, for example), and those banknotes are often among the key issues of the country.

The entire Bermuda banknote series is very interesting to collect, and as we mentioned before there are some very dedicated collectors of the series. Putting together a collection of these banknotes can provide a lifetime of collecting for even the most dedicated collector, as they can be very challenging to find, especially in higher grades.
Share: