In a previous article we discussed the pre-decimal banknotes of Bermuda, an interesting series that circulated until 1970. At that point, it was replaced by an entire new currency system that introduced decimal banknotes denominated in dollars and fixed at par with U.S. dollar. This article is about those decimal banknotes, issued in various series, with the most recent issue dated 2009. Even though these are relatively modern banknotes, we will see that some of the varieties are quite rare. Bermuda, like many other Commonwealth countries, has a very strong collector base both on the island and in the rest of the world, and the rarest issues can sell for thousands of dollars when they appear at auction.

The first decimal issue of Bermuda is dated 6th February 1970 and consists of five denominations: $1 (Pick-23), $5 (Pick-24), $10 (Pick-25), $20 (Pick-26), and $50 (Pick-27). The notes have a portrait of Queen Elizabeth II on the right, based on a photograph by Anthony Buckley taken in 1960. The reverse features scenes from Bermuda, the people, and its wildlife. The notes are identified on the front as being from the “Bermuda Government.” This is the only decimal issue with these words; curiously, they have been signed by the chairman of the Bermuda Monetary Authority, Charles W. Kempe. All denominations of this issue appear for sale with some frequency, and a complete set is within the realm of possibility for many collectors (although the $50 denomination is quite scarce). 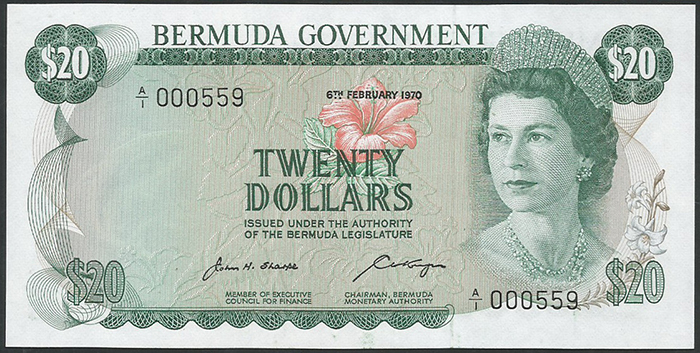 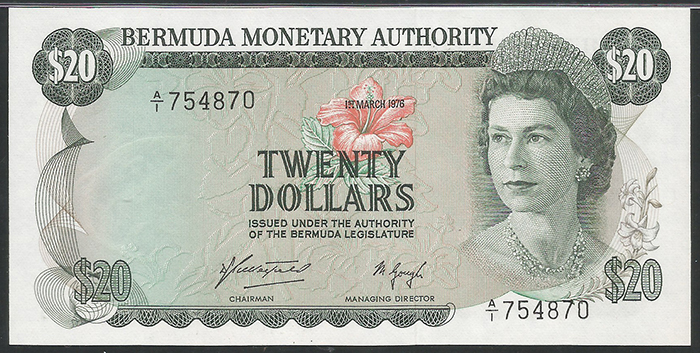 Twenty-dollar notes from the 1970s. They were initially issued by the Bermuda Government (top image); subsequent issues bore the imprint of the Bermuda Monetary Authority (bottom image).

Notes in the next series feature the same design but were issued by the Bermuda Monetary Authority, which had been established in 1969. These notes were first issued with various dates in the 1970s and would continue to be printed until the late 1980s. The $1 (Pick-28) and $5 (Pick-29) are generally available, but other dates are scarce. The $10 (Pick-30) was issued for just two dates (1978 and 1982), while the $20 (Pick -31) and $50 (Pick-32) were issued for several different dates; most are very scarce. The 1974 $50 is one of the most difficult QEII banknotes from Bermuda to find in Uncirculated condition and is considered to be the rarest banknote of the decimal series. Also very scarce are the banknotes of the $100 denomination (Pick-32), which was new for this series, and first introduced in 1982. For collectors wishing to acquire a complete set but looking for a more affordable option of Uncirculated notes, in the 1980s the Franklin Mint released specimen sets that might be a good option. Featuring normal serial numbers, these are overprinted with a diagonal red SPECIMEN and punch-hole canceled. They sell for a fraction of what issued notes sell for.


Bermuda banknotes were modernized in 1988, when the portrait of Queen Elizabeth II was replaced with a more mature version and new security features were added. The $1 denomination was discontinued, but in its place came a new denomination, the $2, issued dated 1988 and 1989 (Pick-34). The $5 denomination of this series is dated 1989 (Pick-35) and is particularly interesting, as the first issue was hastily overprinted with new signatures of Richard Butterfield. The old signer, Edgar Wilkinson, was caught trying to smuggle undeclared cash out of the country the day before the notes were released, and as a result was forced to resign. The first 600,000 notes bore a silver device on which Butterfield’s signatures were printed, while a later issue bore the same date but just has a regular signature.

The 1989 $5 notes initially had the director’s signature printed on top of a silver, comet-shaped device (top image). Later printings of the same issue had a regular signature (bottom image).

Revised designs were issued for the larger denominations as well in 1989, and these can be found in the Pick catalog under numbers 36 through 39. While the new design retained elements of the previous design, the entire series has a much more modern feel. The series would continue with the same portrait until the late 1990s; but starting in 1992 there was a small change of the text on the front of the notes, and the back of the $50 denomination was entirely redesigned. Instead of reading “Issued under the authority of the Bermuda legislature” the text now reads “This note is legal tender issued under the Bermuda Monetary Authority act 1969.” These notes can be found in the Pick catalog under numbers 40A through 49. Some dates are more readily available than others, but overall most can be found in Uncirculated condition without much difficulty. This series also saw the introduction of various commemoratives that were sold to collectors at a premium above face value. Such commemoratives include a $50 issued in a cardboard envelope to commemorate the 500th anniversary of Columbus’s landing in the Americas (Pick-40) and a $20 note issued to commemorate the opening of the Burnaby House, a new headquarters for the Bermuda Monetary Authority (Pick-47). Both look like regular issues but were overprinted with special text.

Fifty-dollar note issued in 1992 to commemorate the 500th anniversary of the landing of Columbus in the Americas.