The Popken and Horn collections are just two of the many highlights of the 2015 Künker Summer Sale. The almost 4,000 lots, their estimates adding up to 5.5 million euros, include numerous rarities from all around the world – from Medieval to Modern Times.

Everybody will find his or her favorite coin when Künker starts its Summer Auction 263 on Tuesday, June 23, 2015, at 10 a.m. sharp. The auction begins with the Friedrich Popken collection featuring rarities from Erfurt, Halberstadt, Hamburg, and Magdeburg. World coins and medals are next, presenting numerous rarities from the third part of the Ernst Otto Horn Collection, among others. Auction 264 focuses on gold coins, offering the collector not only a series of British 5 guinea pieces, but a rich selection of portugalöser from the city of Hamburg as well. They are followed up by coins from the German Empire, likewise with many rarities, including 3 mark ‘Frederick the Wise’. On June 25, 2015, in the afternoon, the Summer Auction of Künker’s ends with Russian coins and medals.

The collector Friedrich Popken is well known to coin aficionados. In the past years, several parts of his superb collection have been auctioned by Künker. Now, it is some areas of his collection that will be for sale: the coinages from Erfurt, Halberstadt, Hamburg, Magdeburg, and Minden. The specialized collector will discover any number of interesting specimens, some of which have estimates in the two-digit range. 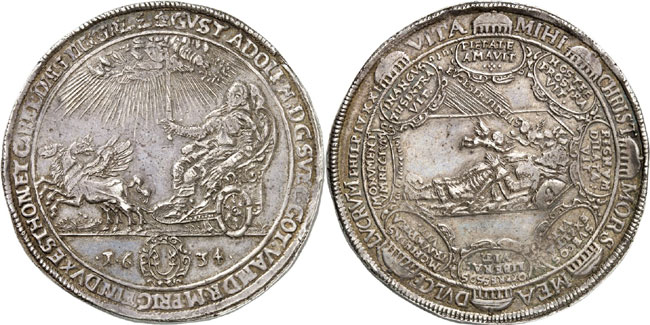 Naturally, the estimates of the great rarities are higher. A case in point is the spectacular double reichsthaler from Erfurt from 1634 on the death of Gustavus Adolphus, with its provenance dating back to 1914, whose estimate of 4,000 euros is more of a starting price.

The same goes for the 7,500 euros the catalogue suggests as estimate of the double reichsthaler from Halberstadt from 1663 in very fine, the second specimen known to exist. Even rarer, thus unique, is a thick double thaler from Magdeburg without date, issued after 1549 on the Augsburg Interim. The enigmatic specimen, with its obverse depiction of Christ holding a dragon with the heads of an angel, a pope and a Turk at bay, is estimated at 4,000 euros. The highlight among the coins from Hamburg is a reichsthaler from 1680 on the Treaties of Peace of Nijmegen, estimated at 6,000 euros.

That is only the beginning. Whoever is interested in German coins no matter from which region and which epoch will find something to his liking in the Künker Summer Auction. Rarities come from all parts of the Empire, bearing witness to its former fragmentation which caused many minor noble houses to convert even the smallest towns to residencies. Today, less than 5,000 citizens are living in Wilhermsdorf in Central Franconia, for example, where Henry Herman Schutzbar used to exert his right of coinage in his capacity as Landgrave of Burgmilchling. As all coins of the Milchling family, the specimen on offer, a reichsthaler from 1611 estimated at 4,000 euros, is extremely rare.

At least as rare is a pattern for the Prussian vereinsdoppelthaler from 1838, which was a first strike and is graded almost uncirculated. It is estimated at 20,000 euros, as is an attractive double reichsthaler of Ulrich II, Count of East Frisia, from 1631, celebrating the homage.

Those who prefer large batches should look at the multiple lots quite closely. Lot 1447 offers a collection of nearly 4,650 coins with a focus on the German States. The spectrum ranges from the copper penny to the double vereinsthaler. In addition, the collector had assembled larger series of coins from Great Britain, Italy, Poland and Russia as well. 45,000 euros is the estimate.

Of course the fans of world coins are not forgotten, either. They have plenty to choose from, not only individual items like the extremely rare Australian pattern penny from 1921 with its estimate of 20,000 euros but interesting series as well.

150 coins from France are on offer, for instance, dating from the Middles Ages to the 19th century. A large series of Carolingian deniers deserves special mention at this point. The top item, with an estimate of 10,000 euros, is an extremely rare denarius of Charlemagne struck in an Italian mint. The name of Charlemagne, in the monogram on the coin’s reverse, is written in Greek letters. With an estimate of 300 euros much cheaper, but at least as interesting in terms of monetary history is the pattern for the French 5 franc piece from 1846, produced in the workshop of D. Uhlhorn in the German city of Grevenbroich to assure the French government of the performance ability of German coining presses.

Auction 264 starts with gold coins. The focus is on France, Great Britain with an ample series of 5 guinea pieces, as well as on Hungary with numerous high-denomination gold coins coming from Transylvania.

Other areas likewise offer individual items of utmost rarity: Only 181 specimens have been produced of an Italian 20 lire 1902 (UNC, 40,000 euros), from Norway comes a ducat of Christian V, which is likely the 6th known specimen owned by a private collector (VF, 40,000 euros), from South Africa originates a pound from 1902, coined after the end of the Boer Wars from the gold found in the recently discovered deposits (EF, 10,000 euros), and the Holy Roman Empire is represented by a 10 ducat piece from 1692, probably the 3rd specimen known to exist (EF, 50,000 euros).

Of course, the collector can find many sought-after pieces in the German States section as well. There, a small series of portugalöser from the city of Hamburg catches the eye, including a gorgeous specimen from 1672, graded extremely fine to uncirculated featuring a depiction of the Port of Hamburg which is estimated at 30,000 euros.

Perhaps even more spectacular is a 6 ducat piece from Nuremberg from 1631, struck from the dies of the reichsthaler. The uncirculated gem is estimated at 60,000 euros and exhibits a magnificent city scape on the obverse while the reverse depicts the imperial eagle, on its chest a medallion with the portrait of Ferdinand II.

This auction sale once again offers numerous rarities among the coins from the German Empire, the highlight will be a superb proof specimen of ‘Frederick the Wise’. The rarest silver coin of the German Empire has an estimate of 75,000 euros and thus outshines the rarest gold coin of this series, the 20 mark 1872 of Ernest II of Saxe-Coburg-Gotha, graded very fine to extremely fine, which has a virtual pre-sale price tag of 50,000 euros.

A very special rarity to all those who are interested in the coins from the Federal Republic of Germany is the very first known example of a pattern for the popular first commemorative coin of post-WWII Germany, the ‘Germanisches Museum’ (‘Germanic Museum’). Medalist Karl Roth had submitted two drafts, of which the second was approved by the jury. However, the President of Germany, Theodor Heuss wanted to have the first version. The Ministry of Finance adopted Heuss’ decision – and the jury could not do anything about it, several petitions notwithstanding. That was how the 5 mark piece ‘Germanisches Museum’ as we know it came into being. So far, a plaster cast model was the only testimony of the second draft. The auction house Künker now has the pleasure of offering a struck pattern, estimated at 15,000 euros. This is really a trial strike that witnesses the fascinating begin of Germany’s production of commemorative coins.

The third and final part of Auction 264 comprises coins and medals from Russia. As is tradition, this area includes a great many rarities, with a 10 roubel piece of Peter III, minted in St. Petersburg in 1762, estimated at 75,000 euros, standing out. Yet an extremely rare roubel from 1757 showing the portrait of Elizabeth created by Genevan medalist Jean Dassier and a showpiece of a roubel from 1913 will surely attract attention as well. 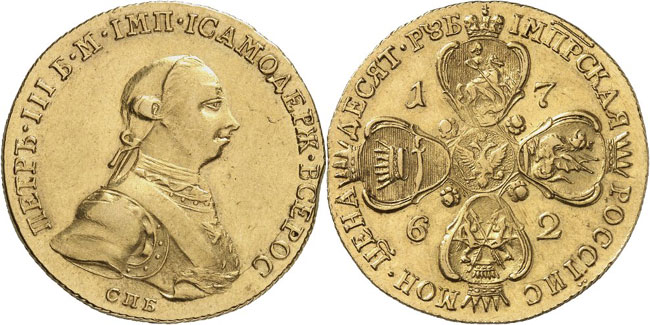