In this first article of a series we will take a look at the coins of countries and territories that can be a great introduction to the collecting of world coinage. While many countries have issued coins for centuries and a complete collection is out of reach to even the most advanced collector, there were also a number of short-lived countries and territories that had their own coinage. Such a set can be a rewarding experience as completion is an attainable goal for many collectors, even though the history of these countries might not be immediately known to the general collecting public.

The first country we take a look at is New Guinea, from the time part of it was an Australian territory. The second largest island that is not a continent, it is located north of Australia and east of present-day Indonesia. Humans have been living on the island for at least 60,000 years, and it has a varied history. In more recent times, the island was divided and become a colony of the Netherlands, Germany and Great-Britain. The western half part of the Dutch East Indies, while the Northern part was first German New Guinea and then become the Territory of New Guinea following World War I. The Australian government took over control of the territory (now known as the Trust Territory of New Guinea) in 1920 and would govern until World War II. It was in this period that the coins discussed in this article were struck.

Between 1929 and 1945 a total of thirteen coins were struck. The first of these, the 1929 half penny and penny saw 25,000 and 63,000 pieces produced respectively, but they were not released in circulation and most were destroyed. Both denominations featured a similar design, with imperial royal elements on the obverse and examples of Native Guinean art on the reverse. The reason of the withdrawal was the similarity of the two denominations to size of the six pence and shilling of Australia, both of which were struck in silver and obviously more valuable. Since there was a remote chance that the coins would make it back to Australia and put into bank rolls as the more valuable Australian coins it was decided that the coins should be send back to the Australian continent and destroyed. Approximately 400 coins of each were retained by the Melbourne Mint (where all New Guinea coins of this period were struck) and later sold to collectors. Without a doubt these two issues are now the keys of the set and have sold for several thousand dollars each at auction. It must be noted that both issues are known in copper-nickel (circulation strikes as well as Proofs) and nickel (Proofs only), the latter of which might have been a pattern issue.

It must be noted that all coins struck for the Territory of New Guinea have a small hole at the center, something that is not often seen with coins of the British Territories. This was meant for the natives; prior to  the introduction of Western-style coinage the economy of New Guinea used a variety of items as currency; from beads to dog teeth. To carry these easily they were often holed and carried on a string by the natives, and as a result it was deemed appropriate to have all New Guinea coins holed as well.

After the two failed denominations which were never released into circulation it would take another six years before the next coins specifically meant for New Guinea would be struck in Australia. In 1935 three denominations were released, a three pence struck in copper-nickel (mintage 1,200,000), a six pence struck in copper-nickel as well (mintage 2,000,000) and a shilling struck in sterling (.925 fine) silver (mintage 2,100,000). All coins of New Guinea were designed by English artist George Kruger Gray, known for many coin designs of Great-Britain and its territories struck during this the first half of the 20th century. The obverse of the three pence featured a crown, the date and the monogram “G.R.I” (GEORGIUS REX IMPERATOR), the reverse a representation of a stone head of a native war club. The six pence had a similar obverse, while the reverse featured an 8-pointed star which also was a stone head of a native war club. The shilling, interestingly, copied the design of the ill-fated 1929 issues, with minor modifications. 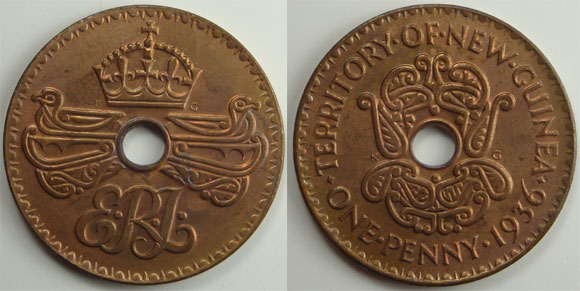 In 1936 a bronze penny was introduced, with a total of 360,000 coins struck for circulation. The design was different from the penny struck in 1929. It featured a stylistic design with swimming birds, a crown and the monogram “E.R.I” (EDWARDUS REX IMPERATOR) on the obverse. The reverse shows a representation of native New Guinean ornamental carving. This coin is one of the few coins of British territories that bears a reference to the short-lived King Edward VII, who ruled briefly in 1936 before handing the thrown to his brother, George VI. The only other denomination dated that year was the shilling, with 1,360,000 pieces produced. This coin, unlike the penny, did still feature the name of George V. 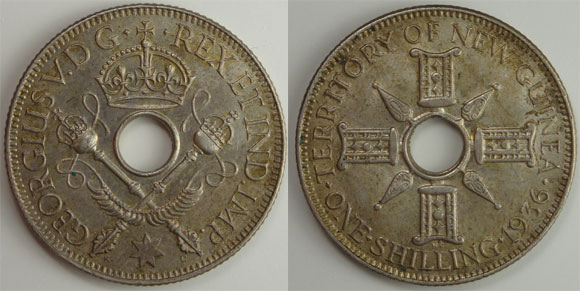 Besides the 1929 issues none of the New Guinean coins are rarities and most can be found in uncirculated condition for less than $100 each (and most issues for substantially less than that). True high-grade pieces certified by leading third-party grading companies are generally scarce, but this might be due to the fact that few of such coins have been sent in for certification. The 11-piece set (disregarding the two 1929 issues) is a great and historic collector that can be recommended for many collectors new to world coinage. To add a more difficult level to the set the more advanced collector could opt to include Proofs, which were produced in extremely limited numbers, and are seen quite infrequently. It must be noted, however, that for some issues no Proofs are known, and a full set is practically impossible to complete due to this reason.