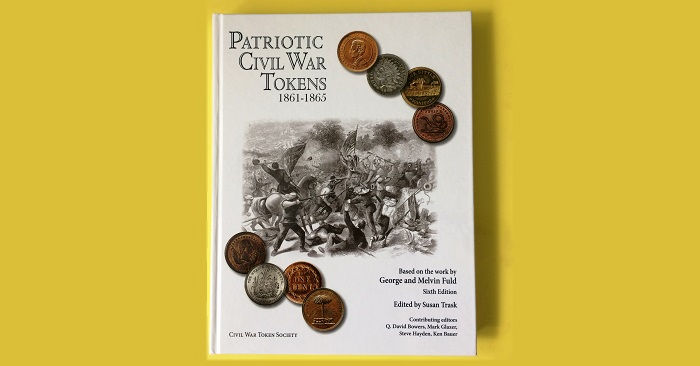 The Civil War Token Society has done it again! Demonstrating its role as a leader in independent numismatic publishing, the Society has recently issued the sixth edition of Patriotic Civil War Tokens. The new production updates the classic standard reference by George and Melvin Fuld, published first in 1960 by Whitman Publishing and penultimately in 2005.

Numismatist Susan Trask, currently president of the Civil War Token Society, served as chair of the CWTS committee that spearheaded the planning, and did the heavy lifting required for this beautifully produced update. Their effort included years of research and thousands of hours of cataloging, and the book’s acknowledgments read like a “Who’s Who” among modern Civil War token historians. (Credit is also given to contributors to the first five editions, including the original authors, George and Melvin Fuld; the late Evelyn R. Mishkin and Steve Tanenbaum; and many others.) Trask edited the sixth edition, with notable assistance from Q. David Bowers, Mark Glazer, Steve Hayden, and Ken Bauer.

Earlier this decade, CWTS secretary John Ostendorf served a similar role on another Society project. He chaired and edited the third edition of the Fulds’ U.S. Civil War Store Cards (covering merchant- and service-advertising tokens), which was published in 2014. The committee-fueled work on that book was a model for the Patriotic update (covering non-advertising tokens with political and social messages). The books were not simply revised, but completely overhauled and modernized with today’s readers, researchers, and collectors in mind. Information architecture, navigational elements, layout, the use of color, enlarged high-resolution photography, high-quality paper, a large trim size, a hard cover and sturdy binding—all of these factors combine to produce an impressive and eminently usable tome. It’s heartening to note that other researchers, writers, editors, and publishers, in other numismatic fields, are making similar inroads into modernizing classic references. Harry Schultz, an expert in 1903–1945 Philippine coinage and medals minted under U.S. sovereignty, comes to mind, with his in-the-works update and expansion of Lyman L. Allen’s U.S./Philippine Coins. On a broader scale, the hobby-standard Guide Book of United States Coins has been dramatically enlarged in recent years to a deluxe edition (popularly nicknamed “Mega Red” for its six-pound, 1,504-page presence). With a few exceptions, the old style of text-only manuscripts, or volumes plated with engravings or black-and-white photographs, simply will not satisfy today’s mainstream numismatic audience. The Civil War Token Society gives that audience what it wants.


The first 100 or so pages of Patriotic Civil War Tokens is a valuable education in the subject matter: 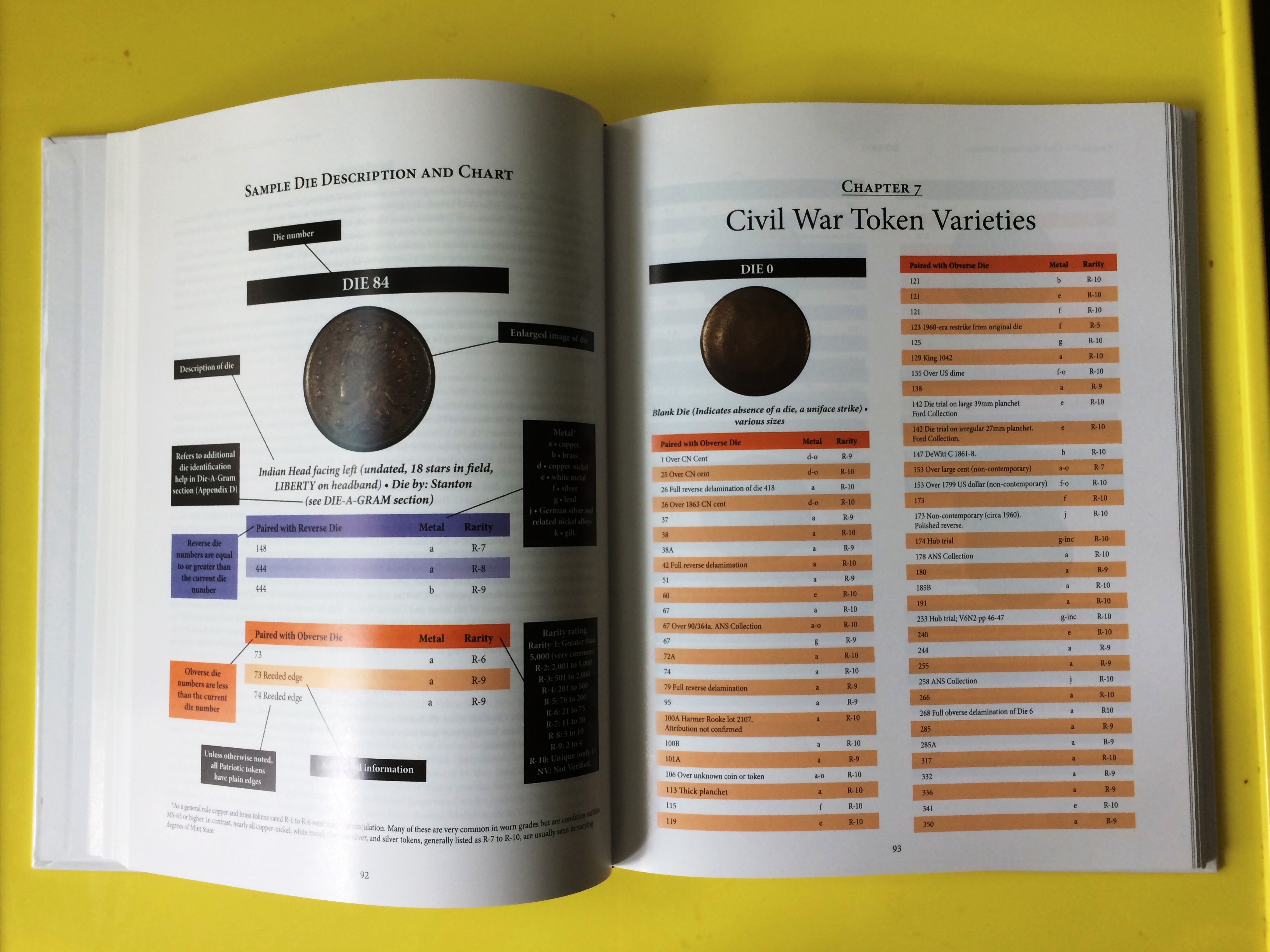 After those first six chapters, the next 150-plus pages in chapter 7 give an illustrated catalog of Civil War patriotic tokens by variety. While chapters 1 through 6 were filling appetizers, this is the meat of the book: a richly illustrated study of more than 500 dies, with descriptions and data on obverse/reverse pairings, rarities, metallic compositions, and other characteristics. Kudos to the Civil War Token Society for investing in full color and laying out the book with enlarged photographs—that attention to detail serves the reader well. And readers be warned: if the first six chapters moved you toward the edge of token-mania, the seventh will push you over. It is as close to perusing a longtime hobbyist’s outstanding collection as you can get, without actually being seated at his library desk with a magnifying glass in hand.

After chapter 7, the book’s back matter shares reminiscences by the late great Dr. George Fuld, an alphabetical listing of legends, a detailed illustrated glossary, a bibliography, a table converting patriotic token dies to corresponding store card dies, and an appendix of photo diagrams to help visually differentiate between similar dies, based on the work of Jack Detwiler.

These elements combine to make the sixth edition of Civil War Patriotic Tokens a perfect introduction for the beginning collector, and a valuable reference for the more experienced numismatist. My advice is to add this book to your personal library. Connect yourself to the long, grand tradition of numismatists interested in this important field of Civil War–era money. Otherwise, you risk being left behind by the latest and most active generation of American historians and collectors.