In 2000 the United States Mint embarked an unprecedented public relations and advertising campaign to support the launch and encourage use of the new Sacagawea “Golden” Dollars. Their efforts included an outreach program to financial institutions, collaboration with major retailers, exposure on nationally televised programs, and a $40 million television, radio, print, mass transit, and internet advertising campaign. One early promotion with General Mills gave rise to the 2000 “Cheerios” Lincoln Cents, which were distributed in specially marked boxes of Cheerios cereal.

The United States Mint provided General Mills with the first 10 million 2000-dated Lincoln Cents, as well as 5,500 of the new Sacagawea Dollars. Through the promotion, each box of cereal would contain one of the 2000 cents, with every 2,000th box containing a new Golden Dollar, and every 4,400th box containing a certificate redeemable for 100 Golden Dollars. These cereal boxes actually represented the first release of the Sacagawea Dollar to the public, as shipment to Federal Reserve Banks did not begin until January 18, 2000. 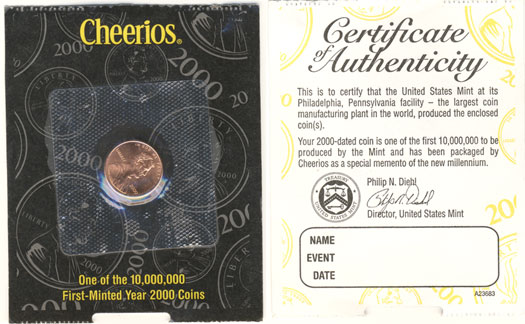 The so-called 2000 Cheerios Penny is mounted on a black card decorated with images of 2000-dated cents and dollar coins, which for some reason carry the “S” mint mark used on proof coins. The text of the card reads “Cheerios” at the top and “One of the 10,000,000 First-Minted Year 2000 Coins” on the bottom. The back of the card contains a certificate of authenticity signed by Philip N. Diehl, Director of the United States Mint, which certified that the enclosed coin was one of the first 10 million to be produced by the Mint and packaged as a memento of the new millennium. 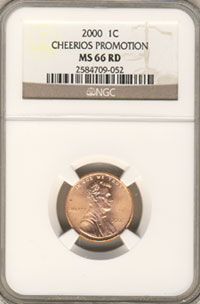 Of the millions distributed, many of the 2000 Cheerios Cents were retained by collectors or intrigued members of the public within their original packaging. These can be found available for sale for around $5, or sometimes less.

The NGC Online Census provides a grading breakdown for the designation, showing more than 500 pieces encapsulated with the majority grading MS65RD or MS66RD. The highest graded are 67 pieces at the MS67RD grade level and a single coin at MS68RD.

Besides keeping the Cheerios Penny in the original packaging or having it graded, a better option may have been to keep the entire original box of Cheerios intact. Periodically, an unopened specially marked box of Cheerios surfaces on eBay and sells for a significant premium. Most recently a box sold for $56 on September 7, 2012.

The real prizes from the promotion, which are a contributor to the high prices paid for unopened cereal boxes, were the 5,500 2000-dated Sacagawea Dollars randomly placed within the boxes. More than five years after the promotion ended, it was determined that many of these coins had a prototype or pattern reverse, which differed from the final reverse design used for the circulation release. These coins have recently sold for $4,000 or more, depending on the grade.