The Royal Canadian Mint have launched two new coins which mark the Calgary Stampede, an event which has put the host city on the map of western-style entertainment and excitement.

In 1912, working cowboy and trick roper Guy Weadick, inspired by the traveling wild-west shows that enjoyed world-wide popularity in the early 1900s, convinced four local ranchers to help him produce the first “Frontier Days and Cowboy Championship Contest”, soon to be christened the “Calgary Stampede”. After 100 years, Calgary, Alberta remains home to “the greatest outdoor show on earth”, which has welcomed millions of visitors and dignitaries from all over Canada and the world in a unique celebration of the romance and culture of the old west. 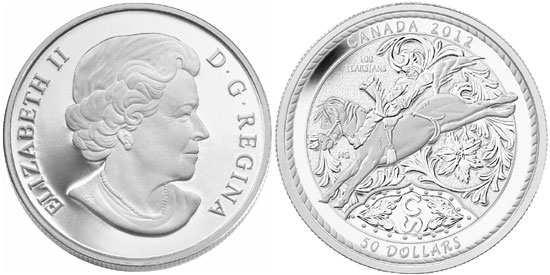 The event is captured on gold and silver coins weighing in at 5 ounces each, with both coins minted in 99.99% pure metals. The iconic and symbolic “Bucking bronco” is the featured design of the reverse, which is the work of Calgary-based western artist Michelle Grant. Depicted is a cowboy in the saddle as well as the current star of the Stampede named Grated Coconut, with no less than six Bareback Horse of the Year awards to its name. Also included in the design is the intricate scrolling embellishments of classic leather saddle design. The trademark “CS” of the Stampede and the date of 2012 along with the coin’s face value just under the bucking bronco complete this tribute to 100 thrilling years of Calgary Stampede history.

The obverse of both coins includes the current portrait of HM Queen Elizabeth II, designed by Susanna Blunt and in use on Canadian coins since 2003.

For more information on these and other coins on offer by the Royal Canadian Mint, please visit their website at: http://www.mint.ca/