There are rules to the breakout and crossover game–cracking open a holder to free and re-submit a coin or sending the coin in its holder to a different grading company.

Even if you follow those rules, you always won’t get the grade or the result you wanted. 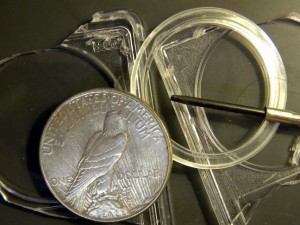 To play the breakout and crossover game, you have to be an experienced coin grader. (If you question whether you qualify, you probably don’t, as keen knowledge of numismatics is required to play this game.) That said, you can test yourself by asking your local dealer or professional numismatist to display a sample of coins that you both grade without discussion, comparing scores later to see how well you did. Or your local coin club can hold regular grading sessions, as do many numismatic organizations.

Otherwise, rely on that dealer or numismatist friend to give you a candid assessment of a coin’s grade or potential. Sooner than you think, you’ll begin looking at coins in a different light, literally and figuratively.

Keep this utmost in mind: If you lack grading savvy–which includes distinguishing dipped, cleaned, doctored, altered and counterfeit coins from ones in natural state–you will pay lots of fees with no or little return on your investment.

Rule 1: When to Break Out

You should remove a coin from its holder if you believe that it can score a higher grade without the bias of another company’s label. You should also break out MS70/PF70 coins if submitting to NGC or PCGS because they will not cross over coins at that level, for good reason, too, as they have to inspect the coin closely without a holder to see if it earns the top allowable grade.

Rule 2: When to Cross Over

You should send a coin in its holder if you believe that the grade justifies that, although you won’t be allowed by the top companies to specify a higher grade than on the label. If your coin has good luster (or a VAM, error or variety designation) you might also want to leave it in the holder, especially if your crossing over from NGC to PCGS (or vice versa) or from ICG or ANACs. Graders generally trust the judgment of their professional peers.

You should mark “any” if you will be satisfied with any grade in crossing over to the new holder or “genuine” if you just need authentication for your set registry or peace of mind. Check “any” if you want the coin to remain in its holder, such as an ANACS coin with rainbow hues, rather than risk a PCGS “Genuine” or NGC “Details” label for questionable or artificial color.

Collectors play the breakout and crossover game for a variety of reasons, not always associated with striving for a higher designation–a bias that has become myth in the most popular coin books and news releases. Sometimes you send in coins multiple times because grading truly is subjective and because rules of grading companies unintentionally force re-submissions–the topic, too, of a future column concerning a coin still in the grading process.