Baldwin’s are delighted to announce that they will be offering a portion of Roman coins from the Bishop’s Wood Hoard of 1895 for sale by auction. This hoard of Roman coins will be auctioned alongside the Michael Hall Collection of Renaissance Medals at their May 4-5, 2010 London event. 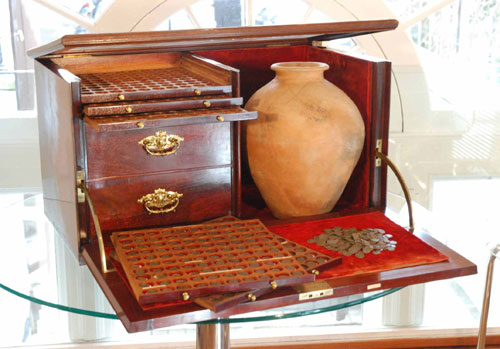 The extensive hoard was unearthed at Bishop’s Wood, near Ross-on-Wye, just across the Herefordshire border and within the surroundings of the Forest of Dean. Several other, smaller finds, of similar coins had also been found along this route but none as vast or as interesting as this. It was discovered in a rough walling built against the hillside by workmen who were in the process of repairing a road and who struck an earthenware vessel containing the coins. The accidental strike from a pick broke the jar and scattered its contents in various directions.

Details of the hoard were first published in the 1896 edition of the Numismatic Chronicle, and also in the editorial of the Numismatic Circular in November of that year. In both publications a total of 17,550 coins were listed, although a number had already been lifted and dispersed around the region by the time the coins were rescued. Many of these coins were subsequently given to local museums and the portion now being sold by Baldwin’s (containing 1,661 coins and the restored jar that contained them) has remained in the family of the original landowner since they were found in 1895. Included with the hoard is a reprint of the article from the Numsimatic Chronicle of 1896 and a reprint of ‘Notes on a Great Hoard of Roman Coins found at Bishop’s Wood in 1895’ from the “Transactions of the Bristol and Gloucestershire Archaeological Society”, vol. XIX, pp. 399-420, both written by Mary Bagnall-Oakeley. The latter also includes the author’s handwritten annotations and a list, dated March 1898, of the museums and institutions that she was aware had received portions of the hoard.

Following the revolts of the usurpers Carausius and Allectus in Britain in the late third century A.D., it is likely that the area in which the hoard was found was occupied by Roman soldiers at the time the coins were deposited. Given its size it is assumed that the Bishop’s Wood Hoard formed part of a military treasure, intended as payment for the legions. There were no banks in Roman Britain, so the usual practice was to hoard large quantities of money and deposit it in the ground for safe-keeping. It is therefore a fascinating primary source of information for the mints employed in supplying Britain with coinage.

The contents of the hoard are composed almost entirely of bronze coins of the Constantinian family and we can surmise that it was deposited after A.D. 337 as there are many coins of Constantius II, who had received the title of Augustus in that year, included within it. The Numismatic Chronicle lists its contents as follows:

The majority of the coins were minted at Lugdunum (Lyons), Treveri (Trier) and Arelate (Arles). Rome and Aquileia are also present, as well as a sprinkling of coins from Siscia, Thessalonica, Heraclea, Constantinople, Nicomedia, Cyzicus and Antioch. The coins are in very good condition, many of them having seen little or no circulation. They have been expertly cleaned and preserved and the coins, together with the reconstructed vessel, are now housed within a custom-made cabinet with a glass lid.

There are many coins of interest included and careful viewing of the lots is recommended. For more information about any of the other lots or to make an appointment to view the hoard please contact Paul Hill on +44 (0)20 7930 9450 or at .