The  year 1934 was an interesting one for the United States commemorative coins. Not only were the first commemoratives since 1928 produced (the Great Depression had put a halt on new issues), but it also was the first year that a number of commemorative half dollars were introduced that would be struck for numerous years afterwards. This served to create multiple varieties generally for the sole purpose of raising more money from collectors, a scheme that would eventually result in a massive 144 different coins in a complete date/mintmark set of classic silver commemoratives compared only 50 coins in a type set. One such commemorative issue is the Texas Centennial Half Dollar, which would be struck from 1934 through 1938 with a total of thirteen different date and mint mark combinations.

Texas, the second most populous state of the United States and the largest of the lower 48, does not need an introduction. Widely varied in landscape and population, the area was home to numerous Native American groups for thousands of years before first settled by Europeans. After initial settlement by the French (by mistake, one has to say, since the expedition that colonized and explored a very small part of eastern Texas was instructed to settle near the Mississippi, but navigational errors landed them further west than initially planned). Texas has been at least in part claimed by Spain, Mexico, the Independent Republic of Texas, the United States of America, and the Confederate States of America.

Colonial history of Texas saw the Spanish take over from the French and finally, upon its independence, Mexico claiming ownership to most of Texas. At this time, the early 1820s, most of what is now the state of Texas was settled by Americans, who soon sought independence which led to the Texas Revolution of 1835. The following year the Republic of Texas was born, which eventually sought annexation with the United States, which it joined in 1845 after nine years of intense politics regarding annexation. Often the year 1836 is regarded as the year that Texas attained statehood, but this is incorrect, and the centennial celebrated in the 1934-38 period with the issuance of a commemorative half dollar celebrated the birth of the Texas Republic and breaking of Texas’ ties with Mexico. 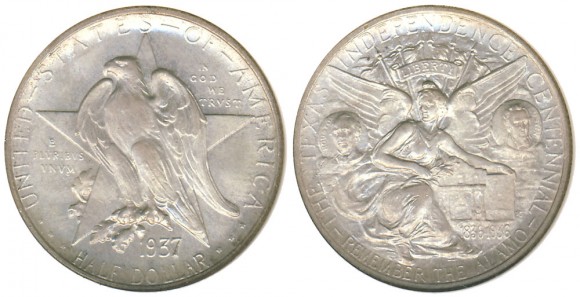 Texas’ varied history can be seen on the half dollar, which is often seen as the most elaborate of all classic commemorative designs. On the obverse we see the “Lone Star”, representing Texas, symbolism that became the nickname of the State and originated from the fact that Texas once was an independent Republic, the only star on its flag. In front of the Lone Star is an American Eagle, depicted very naturally, holding an oak branch in its claws. The lettering is rather thin, and shows UNITED-STATES-OF-AMERICA on top and HALF DOLLAR near the bottom, separated by three stars. The date is right above the word DOLLAR. E PLVRIBVS VNVM (Latin style) is in the left obverse field, and IN GOD WE TRUST is in the upper right.

The reverse is even more elaborate. We see a keeled, winged female figure, representing Victory, with her left hand placed on the Alamo. In her right hand is an olive branch. Next to her wings are two portraits: General Sam Houston who was the first President of the newly found Republic in 1836 on the left and Stephen F. Austin who leader of one of the earliest colonization efforts in Texas on the right. Above Victory’s head are six flags, signifying the six nation’s that at one time or the other laid claim to (part of) Texas. A scroll is seen appearing in front of five arrows with the word LIBERTY. Near the bottom of the coin, placed directly under the Alamo are the dual dates 1836-1936. Near the bottom are the words “REMEMBER THE ALAMO”. The rest of the periphery is completed by the words “THE TEXAS INDEPENDENCE CENTENNIAL”.  Both obverse and reverse were designed by Pompeo Coppini.

The reason for the first issue of the Texas Centennial Commemorative being dated 1934, two years before the actual centennial, is a simple one that seems to have become a recurring theme with this particular commemorative issue: money. The American Legion Texas Centennial Committee of Austin, responsible for the festivities that were to become the Centennial Exposition in Dallas in the Summer and Fall of 1936, realized early on that it was to become an expensive project and requested an issuance of a commemorative coin to be sold at a premium to help fund the exposition. Legislation was passed on June 15, 1933 that authorized an issuance of 1,500,000 pieces.

The first issue, struck in 1934 at the Philadelphia Mint, totaled 205,000 coins which sold relatively well at double face-value plus shipping. Yet, at the end of the year, at total of 143,650 pieces remained unsold and were returned to the Philadelphia Mint and melted, leaving a net mintage of 61,350 pieces. This might have been the end of the Texas Centennial Commemorative Half Dollar, but money and greed kicked in, and from 1935 to 1938 an additional 12 issues were released, each year struck at the Philadelphia (no mintmark), Denver and San Francisco (mintmark appearing near the bottom of the reverse between the T in THE and Victory’s left knee) Mints. 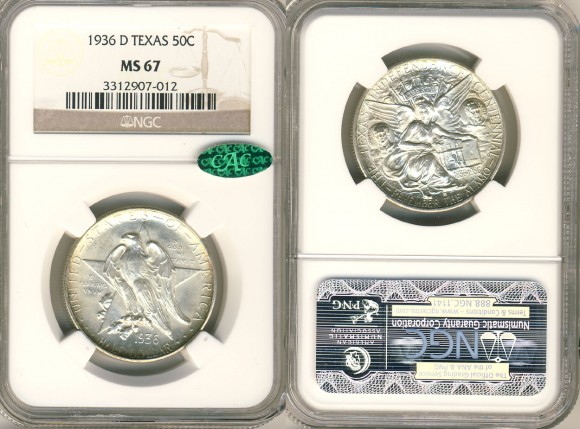 Even though the Centennial Commission had been left with almost 150,000 unsold coins it decided to request more coins, which would become the 1935 Philadelphia, Denver and San Francisco issues. This time, the mintages were much more limited, as each Mint only struck 10,000 coins. These and the latter issues were distributed by the Texas Memorial Museum. The year 1936 saw similar mintages at each at the tree Mints, and the coins now sold for $1.50 each, or $4.50 per set of three. Production continued in 1937, despite the fact that sales were declining, and that year each Mint produced 8,000 coins. Not all of these were sold, however, and the net mintages for all three Mints are around 6,500 coins, give or take a few hundred. Two years after the actual centennial, the final Texas Centennial Half Dollars were struck in 1938 when each Mint produced 5,000 coins. Demand had really slowed down at this point (most likely because of the plethora of other commemorative issues available to collectors during the second half of the 1930s, or perhaps because of the issue price, which had been raised to $2 for each coin) and the net mintages after melting the remainders for the final three issues are around 3,800 each.

With thirteen different issues the Texas Centennial Half Dollar series has left the collector plenty of different coins to choose from, with quality and eye-appeal varying from issue to issue. Those seeking a single type coin will often settle for a 1934, due to availability, but some of the later issues tend to have a bit better eye-appeal and in the author’s opinion generally offer better value because of their low mintages. High-quality pieces up to the MS-66 grade level are generally available, although original pieces with attractive toning can be somewhat difficult to find, and generally sell for a nice premium. MS-67 and better pieces are somewhat occasionally available, but due to demand remain very popular with fierce competition when you’re looking for one such piece.