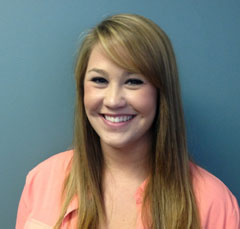 Tara Crosby, a 20-year-old college student from Alpharetta, Georgia, is the recipient of the Professional Numismatists Guild 2014 Young Numismatist Scholarship. She will have the opportunity to attend one of the two week-long American Numismatic Association 2014 Summer Seminar sessions courtesy of PNG.

Crosby was introduced to coins by her family at an early age with gifts of proof sets. She began working part-time earlier this year for PNG Member-Dealer John B. Hamrick in Alpharetta while continuing her studies in communications at Georgia Perimeter College.

“To be able to travel to coin shows and meet so many ‘legends’ in numismatics in person has been a wonderful experience. John (Hamrick) has been so patient teaching me and helping me learn about this fascinating world of coins”, explained Crosby.

In her PNG scholarship competition essay, she wrote about the excitement of making her first coin sale for Hamrick’s company during the ANA National Money Show in Atlanta this past February. It was a 1926-D Double Eagle that she sold for $20,160.

“I was so thrilled, and my co-workers were incredibly supportive. Making a sale like that with the little knowledge I had gained thus far about coins felt truly amazing and gave me the confidence to pursue a career in the numismatic field.”

Her parents, Greg and Carol Crosby, are delighted she won the PNG scholarship. “We were both very proud and very excited for her to have such a wonderful opportunity. Tara has always been very passionate in her interests and we have no doubt she will be successful in wherever she applies herself,” said her father who introduced the couple’s children to coins.

“Each year since the birth of our three children, one of the gifts they always received was a United States Mint proof set for that year.  We have done so up to the age of 21.  So, all the children have a complete set of 21 proof sets.  Tara will receive her final one in July when she turns 21,” he explained.

The PNG YN Scholarship Competition is open each year to applicants between the age of 13 and 22.  Entrants submit a short essay outlining why they should be chosen as the scholarship recipient.

“The scholarship covers airfare, tuition for one of the two week-long Summer Seminar sessions, meals and five nights of dormitory accommodations on the campus of Colorado College, site of the ANA headquarters,” said PNG Executive Director Robert Brueggeman.

The money to pay for the annual PNG YN Scholarship is administered from PNG’s Gerald Bauman Memorial Fund. Bauman, who died in 2001, served for many years as a prominent coin dealer with Manfra, Tordella & Brookes in New York City.

The PNG is a nonprofit organization composed of many of the top rare coin and paper money dealers in the United States and seven other countries.  PNG member-dealers must adhere to a strict Code of Ethics in the buying and selling of numismatic merchandise.  For additional information, visit online at www.PNGdealers.org or call (951) 587-8300.