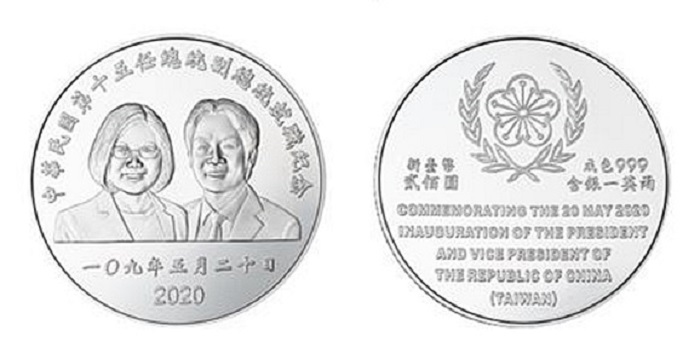 The Central Bank of the Republic of China (Taiwan) announced on the 6 May the release of commemorative gold and silver coins in celebration of the inauguration ceremony of incumbent President Tsai Ing-wen and Vice President-elect Lai Ching‑te, which will be held on the 20 May. President Tsai won her second election as president of the Republic of China (Taiwan) and Lai Ching‑te was chosen as her running mate for her second term. The election was held on the 11 January 2020 in which incumbent president Tsai and former premier Lai of the Democratic Progressive Party won the election, defeating the Kuomintang (KMT) candidates. The inauguration of the president is the 15th such ceremony since the establishment of the Republic of China (Taiwan) in 1949 and the seventh direct presidential election by popular vote. 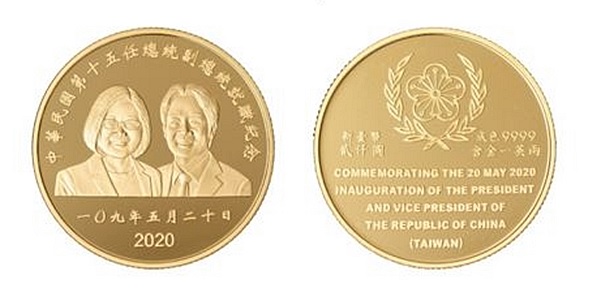 The coins are produced in gold and silver to Proof quality and include front-facing portraits of President Tsai and Vice President Lai. Above their likeness’ is a commemorative inscription in Chinese characters which reads 中 華 民 國 第 十 五 任 總 統 副 總 統 就 職 紀 念 (“Commemoration of the 15th President of the Republic of China inauguration”) and below their portraits is the date of their inauguration, 一 ○ 九 年 五 月 二 十 日  2020. The reverse side includes the emblem of the president of the Republic of China, commonly known as the president of Taiwan, along with the coins’ fineness and metal on either side. Below the emblem is the commemorative inscription in English which reads COMMEMORATING THE 20 MAY 2020 INAUGURATION OF THE PRESIDENT AND VICE PRESIDENT OF THE REPUBLIC OF CHINA (TAIWAN).

The gold and silver coins share the same design on both obverse and reverse.

Each coin is encapsulated, presented in a custom case, and accompanied by a certificate of authenticity from the Central Bank of the Republic of China. For the first time, the commemorative coins will be retailed directly by the Bank of Taiwan, which will allocate 7,000 gold and 35,000 silver coins from online orders while the remainder of the mintages will be available from selected branches and locations for over the counter sales. For additional information, please visit the website of the Bank of Taiwan.