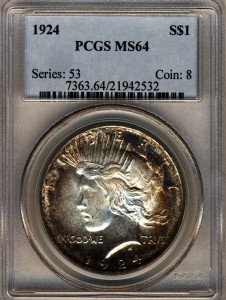 Editor’s Note: This is the second of a three-part article about direct and dealer submissions to the top two third-party grading companies, with the first installment covering the basics; the second, direct PCGS submissions; and the third, dealer NGC submissions. View Part One. View Part Three.

After analyzing benefits of the PCGS Collector Club and the NGC Collector Society, I decided to go with the former, not necessarily because one is superior to the other, but because I already was a member of the American Numismatic Association, which has a partnership with NGC allowing direct submission privileges.

There was another reason, to be explored in more detail in the final installment: NGC encapsulates a wider array of coins, including ancients, for which I needed my dealer’s expertise to enhance my own on certain submissions.

When I joined the PCGS club for a $49 annual fee, I received confirmation notices via e-mail and my membership certificate and submission forms and literature via snail mail.

It took about 30 minutes to read for a basic understanding of how to submit raw coins for encapsulation.

I also received two forms each, in triplicate for company and personal records, for World Coins and U.S. Coins, which also contained instructions that enhanced those in the brochure. (By inputting my membership details, I can download forms already filled out with my personal and club data, an online convenience that I appreciate.)

Finally, I received the 140-page PCGS Coin Numbering System, 19th Edition, covering all the coins and patterns that the company grades in addition to medals, colonials and Canadian issues. Each of these numbers is linked to the online PCGS Population Report, providing additional data on rarity.

The submission form contains information on fees, service levels and turn-around times, as can be found here.

Some particulars: You have to use the appropriate form for the type of submission, apart from World or U.S. Coins, according to service level and/or category, such as “regrade,” requesting re-evaluation of PCGS-holdered coins, or “crossover,” for coins graded by other companies. Each submission form requires an $8 handling fee. The regrade analysis is particularly appealing for PCGS coins in old green holders, as higher designations are possible due to more rigorous grading in the past. The crossover is important if you are reasonably certain that coins graded by other companies will score within an acceptable mint-state or proof range in a PCGS holder.

On regrades, PCGS promises not to downgrade coins previously encapsulated. On crossovers, you can specify a minimum acceptable grade or state “any,” allowing the company to designate the grade it sees fit.

I recently submitted World Coins to PCGS, and because those lacked numbers in the PCGS booklet, I telephoned the company for instructions. My call was taken within a 1-minute waiting period, and the company representative explained that my submissions from 18th century Malta had no PCGS numbers. All I had to do was describe the date, country and denomination.

Filling out the form and packaging my coins took about 30 minutes. I took my parcel to the Post Office, and insured the coins. I received a confirmation e-mail upon their arrival at the company’s headquarters at Newport Beach, California. Moreover, because I was a club member, I could log in and check the status of my order, including the submission number, date received and date sent to my home address.

The process was relatively pain-free, the customer service exemplary, and the online access convenient and reassuring. In sum, I’m happy with my Collector Club membership and plan to renew annually.