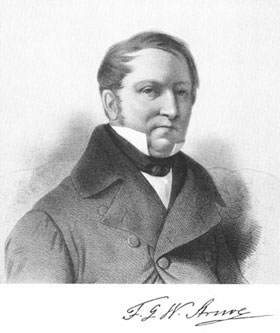 The Bank of Lithuania have launched a silver coin which honors and celebrates one of the most remarkable human attempts to determine the Earth’s shape and size which required a very concentrated level of multi-national co-operation during a time in European history when it wasn’t as possible as it is today. The Struve Geodetic Arc project – named for its founder Friedrich Georg Wilhelm von Struve (1793 – 1864) an eminent professor at Tartu University, Estonia and long-time head of the University’s astronomy observatory who sought to concisely explore and determine the Earth’s shape and size. The Struve Geodetic Arc is a triangulation measurement chain founded in 1855 with the northernmost point located near Hammerfest in Norway and the southernmost point near the Black Sea in Ukraine. The Arc passes through the ten countries of Norway, Sweden, Finland, Russia, Estonia, Latvia, Lithuania, Belarus, Moldova and Ukraine. The meridian Arc length and position is calculated by the measured triangulation network fragments in the aforementioned countries connecting them together resulting in a 2,822 km-long (1,753 miles) chain comprised of 12 sections which are interspersed between astronomy points having 10 measured bases,  258 triangles and connecting 259 triangulation points. Until the mid-20th century when satellite geodetic methods were first applied, this was the most accurately measured and longest meridian arc and for much of the 19th century the results of its measurement were used in calculating and adjusting the parameters of the Earth’s ellipsoid.

In earlier written sources, such attempts are mentioned for the first time in the era of the famed Greek philosopher Aristotle (4th century BC). The radius of the earth was first determined by the Greek scientist Eratosthenes in the 2nd century BC. He calculated the meridian arc length by the speed and length of time it took caravans to cross the desert. The arc, corresponding to the difference between latitudes, was calculated based on the measured height of the Sun on the meridian. Although the accuracy of the measurements was low, the offered method for calculating the Earth’s radius was promising. It was eventually called the method of degree observation. In order to more accurately determine the radius of the Earth, more accurate geodetic measurements had to be performed. The real turning point in strengthening the methodology of the precise measurement of the Earth’s surface took place much later, in the 17th century when the Dutch geodesist Willebrord Snellius (1580 – 1626) proposed to apply the so-called triangulation method, while Isaac Newton in 1687 proved that the shape of the Earth rotating on its axis was similar to an ellipsoid. This meant that the Earth’s meridian’s curvature radius, moving from the equator to the poles, should increase. Using the triangulation method to determine the distance between the points on the Earth’s surface, they are linked into a system of triangles, the angles of triangles are measured and at least one side – the base.

In 2005, the chain was inscribed on UNESCO’s World Heritage List as a memorable ensemble made up of 34 commemorative plaques or built obelisks out of the original 265 main station points which are marked by drilled holes in rock, iron crosses, cairns, etc… These inscriptions are located in ten countries, the most of any UNESCO World Heritage denotation. 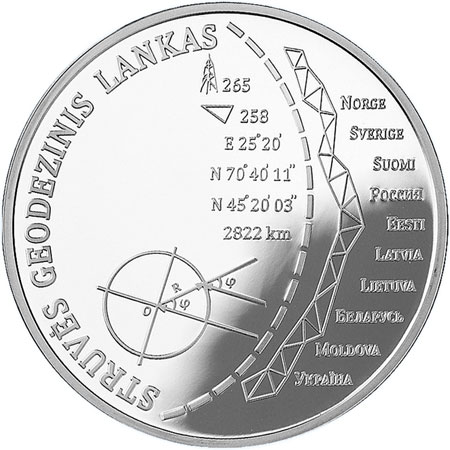 The coin was designed by artist Tadas Žebrauskas is produced by the Lithuanian Mint on behalf of the Bank of Lithuania. It features on the obverse an artistic composition of the Struve Geodetic Arc, The inscription STRUVĖS GEODEZINIS LANKAS (STRUVE GEGODEDIC ARC) is arranged in a semicircle along with the names of the ten countries where the Struve Geodetic arc is located. 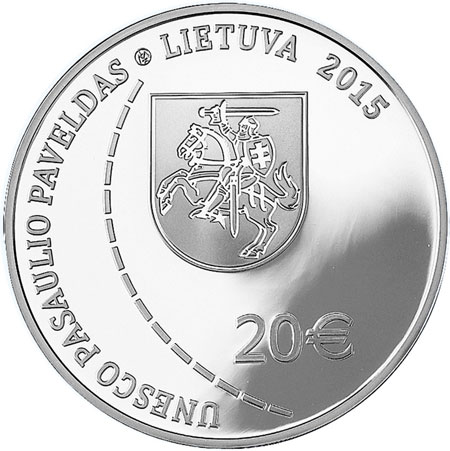 The reverse includes the coat of arms of the Republic of Lithuania in the center, a stylized meridian arc and the inscription UNESCO PASAULIO PAVELDAS, LIETUVA, 2015 (UNESCO WORLD HERITAGE, LITHUANIA, 2015) is arranged on the left in a semicircle, the denomination of €20 is positioned  below it. The mintmark of the Mint is impressed on the obverse of the coin. The edge carries an incused inscription: GIREIŠIAI N55º54’09” E25º26’12” * MEŠKONYS N54º55’51” E25º19’00” *