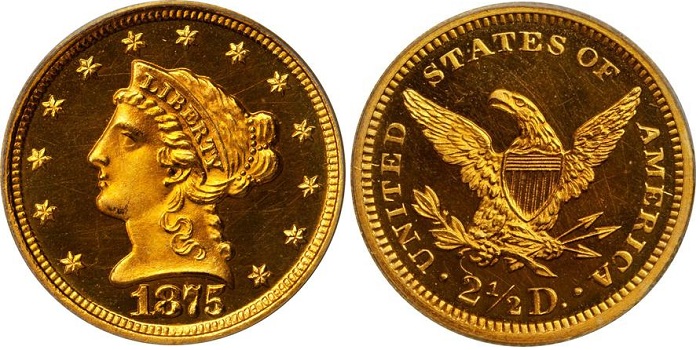 SANTA ANA, CA. — Even three and a half decades after the original dispersal of his incredible gold coin collection, Louis E Eliasberg, Sr. was the champion at the Stack’s Bowers August 2016 Official Auction of the ANA World’s Fair of Money. The United States coins realized over $13.1 million as part of the overall Stack’s Bowers Galleries ANA auction, which in total brought over $21 million. With examples included in several significant collections featured in the sale, some of Eliasberg’s more significant treasures provided for much excitement in Thursday’s Rarities Night session at the Anaheim Convention Center in Orange County, California. (All prices include the 17.5% buyer’s premium.)

Early in the evening, lot 3217 presented an outstanding Proof 1875 Liberty quarter eagle certified Proof-65 by PCGS and approved by CAC. Offered as part of the Bull Run Collection, this piece had passed through the hands of John G. Mills, the Clapp Family, Eliasberg and Ed Trompeter, providing a provenance that is only matched by the rarity of the issue. The strong price realized of $135,125 indicated that the immense desirability of this piece was not lost on bidders. Also from the Bull Run Collection, lot 3490 featured an 1860 Liberty double eagle graded MS-65 by PCGS and approved by CAC, likely the finest known example of the issue. With a pedigree that can be traced back through the Chapman brothers, the Clapp Family and Eliasberg, this phenomenal piece had realized $141,000 by the time the bidding ended.

The Kiev Collection offered an extraordinary 1898 gold Proof set that can be traced directly back to the Philadelphia Mint, where it was acquired by John H. Clapp in November of 1898 before eventually passing to Louis Eliasberg Sr. The Liberty eagle from the set was certified Proof-66 Deep Cameo by PCGS with CAC’s seal of approval, and realized $111,625 in lot 3476. Lot 3505 showcased the true star of the set — a CAC-approved and PCGS-certified Proof-65+ 1898 Liberty double eagle.  Having last seen public auction at the October 1982 Eliasberg sale, this piece brought an astonishing $258,500 in the Stack’s Bowers 2016 ANA event. 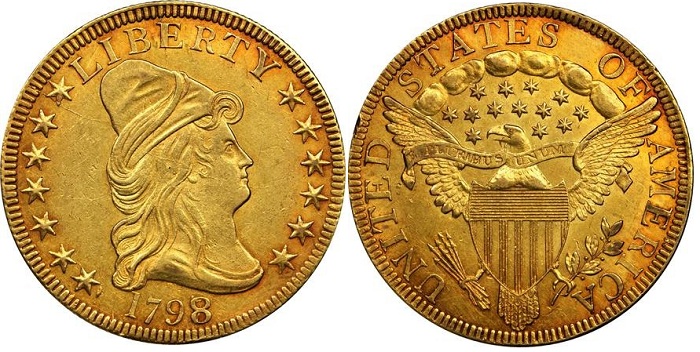 The pinnacle of the auction was a jewel from the Edgar B. Lupfer Collection of Early $10 Gold that also traced its provenance to the Clapp and Eliasberg estates. The gorgeous AU-58 (PCGS) 1798/7 Capped Bust Right eagle offered in lot 3281 combined premium quality and exceptional rarity, resulting in fervent bidding up to $352,500. Last offered at public auction in the Stack’s sale of January 1987, it is bound be several decades before this piece once again appears on the market.

While the Eliasberg pedigree garnered considerable excitement, quality and eye appeal remained paramount, as exhibited by the exceptional 1795 Flowing Hair half dollar in lot 3116. Graded MS-63+ by PCGS, it brought $129,250. Lot 3237 presented a lovely Proof-63 (PCGS) 1879 Flowing Hair Stella, Judd-1635, that realized $146,875. One of the finest certified 1799 Capped Bust Right eagles was sold in lot 3285. Certified MS-65 by PCGS, the gorgeous Gem brought $258,500, the second highest price realized for the auction.

Enthusiasm remained strong through the conclusion of Thursday night’s session, as the beautiful Sand Blast Proof 1912 Saint-Gaudens double eagle in lot 3512 was bid up to $188,000. Certified Proof-65 in a PCGS Old Green Holder and sporting a green CAC sticker, this delightful piece was also from the Bull Run Collection and is surely destined for a similarly exceptional assemblage.

Excitement at the Stack’s Bowers Galleries August 2016 ANA Auction was certainly not limited to Federal U.S. coinage, as was demonstrated in the second session of the sale. Lot 1003 presented a rare silver striking of the Libertas Americana medal, of which just 25 to 30 are known.  Graded MS-62 (NGC), it garnered a stunning $117,500. A bronze striking of this historic medal was offered in the following lot and brought $32,900. A unique gold medal awarded by Congress to Major General Zachary Taylor in 1847 was offered in lot 1012. Measuring 64.7 mm and weighing nearly 9 ounces, it realized $94,000 in its first public auction appearance. Lot 1021 highlighted a stunning example of the first medal authorized by Congress, the “1776” (1790) Washington Before Boston medal. Formerly owned by John J. Ford, Jr., this bronze striking, the finest of 25 to 40 known, was certified MS-66BN by PCGS and realized $38,775. 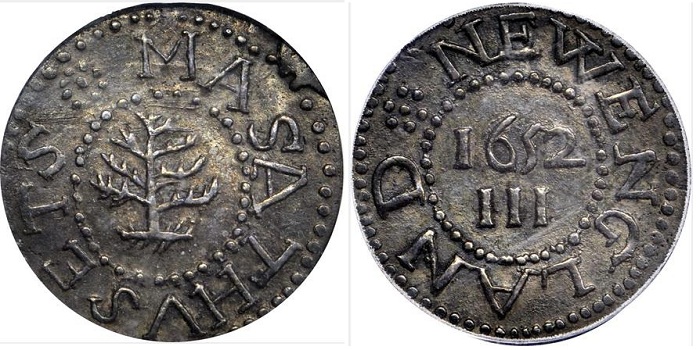 An expansive offering of pre-Federal coinage resulted in strong participation by colonial enthusiasts in the second portion of Session 2. Lot 1122 featured an AU-55 (PCGS) 1652 Pine Tree threepence of the Without Pellets at Trunk variety, formerly owned by John J. Ford, Jr., that sold for $15,275. The selection of 1787 Fugio coppers was particularly comprehensive, featuring many rare and condition census examples. The Fine-15 (PCGS) example of Newman 1-Z in lot 1206 saw considerably fanfare, as this Rarity-7 piece realized $14,100. Previously in the collections of F.C.C. Boyd, John J. Ford, Jr. and specialist Robert Ayers, the coin was offered as part of the Eagle Hill Collection in the Stack’s Bowers 2016 ANA sale.