The Stone Mountain Memorial Half Dollar has a published mintage of 1,314,709 pieces from a massive initial authorization of five million coins, making it one of the most available early commemorative coins. However, this does not mean that it is an uninteresting issue. It gives us some insight into the (often political) process that goes into legislation of new coins, and how much (at least at the time) current events can influence the issuance and design of a coin. 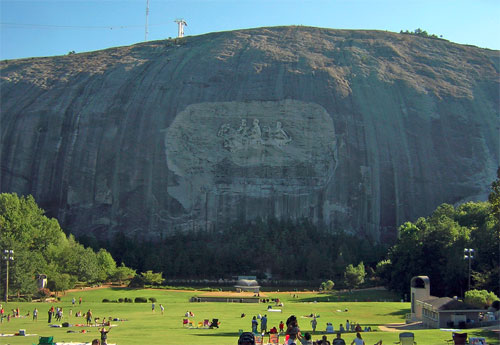 Stone Mountain Memorial, located in DeKalb County, Georgia, is the largest bas-relief structure in the world. It honors three important figures from the short-lived Confederate States of America, Jefferson Davis, Robert E. Lee, and Thomas “Stonewall” Jackson. The site itself is approximately fifteen miles outside of Atlanta, in what would have been the heart of the confederacy during the American Civil War.

The Memorial was created on the drawing table over a period of over ten years, with idea originating with Mrs. C. Helen Plane of the United Daughters of the Confederacy. Work by Gutzon Borglum (best known for designing Mount Rushmore) did not begin until 1923. Borglum left after a dispute arose almost two years into the work, with the memorial only partly finished and money already running out. He was succeeded by Augustus Lukeman, who put in three month years of work, only finishing the head of General Lee before funds dried up and work on the memorial ceased. It would take until 1964 before work would resume, after a competition had selected Walter Kirkland Hancock as the artist who would finally finish the memorial. The Stone Mountain Confederate Memorial was dedicated in 1970 but work would not be completed until 1972, sixty years after the original idea had been created.

Early in this process, in 1924, Congress passed an act authorizing the production and sale of up to five million commemorative half dollars to fund completion of the memorial. First of all, we should not forget that this was less than sixty years after the end of the American Civil War. While the number of people that consciously experienced the war at that time was dwindling, many had of course heard the stories of their parents and grandparents about that horrific time. As a result it should not come as a surprise that the memorial and later the commemorative half dollar were not welcomed everywhere as much as it was in the Southern states, and especially Georgia. People further north strongly resisted, and it was felt that something had to be added to the coin to make it acceptable to people from the North who might resist a commemorative coin with the “heroes” of the South on it.

Around the same time that work started on the memorial Warren G. Harding was elected as the 29th President of the United States. Harding was born in Ohio on November 2, 1865 and had been both Lieutenant Governor as well as Senator for the state of Ohio. A newspaper publisher by trade, he was elected on the Republican ticket in the election of 1920, defeating Democratic James M. Cox, also from Ohio, in a landslide. While his presidency is not one of the most well known, Harding was considered to be a “modern man”, advocating the rights of woman, African Americans and other minorities. Harding would only serve as a President for two years, as he passed away on August 2nd, 1923 at the age of 57 while on tour in San Francisco, California.

The original bill for the Stone Mountain Memorial Commemorative Half Dollar stated that the coin would also be struck to commemorate the late President, during whose administration work on the memorial had commenced. The earliest sketches of the coin, (designed by Gutzon Borglum, the original designer of the memorial) had at first included a portrait of Harding. However, right about this time, newspaper reports spoke of numerous scandals that had occurred during the Harding administration (including appointments of allies to high positions in government, and a scandal known as the “Teapot Dome Scandal”, which involved a bribery scheme concerning petroleum reverses in Wyoming that was known as the “biggest political scandal in America” until the Watergate affair) and any commemoration of Harding on the coin was eventually removed.

The final design by Borglum featured the figures of Confederate Generals Lee and Jackson on horseback, with thirteen stars above the figures. Unlike all other American coins, these stars do not represent the original thirteen states, but the eleven states in the Confederacy, plus Kentucky and Missouri, both Border States that had secessionist factions. Above the stars is IN GOD WE TRUST, and in the lower left are the words STONE MOUNTAIN and the date, 1925.

The reverse features an eagle with its wings spread, standing on a cliff, perhaps signifying Stone Mountain itself. UNITED STATES OF AMERICA is above, with E PLURIBUS UNUM directly under it. To the left is the text “MEMORIAL TO THE VALOR OF THE SOLDIER OF THE SOUTH”. LIBERTY is below that and the denomination, HALF DOLLAR, is at the bottom. In the field there are thirty-five stars, which reportedly were meant to signify all States in the Union prior to the Civil War (the true number of which was 34 at the start of the Civil War and 36 at the end, including all the Confederate states and the newly admitted States of West Virginia and Nevada, but it is unknown if this was a mistake or a deliberate number of stars).

Even though not all five million pieces that had initially been authorized were struck, the total production between January and March was still extremely high at 2,130,000 coins. Eventually 820,000 pieces remained unsold and were later melted. An additional 4,709 assay coins are generally added to the total production figure, giving a published mintage of 1,314,709 pieces. This huge number makes this issue a very available and affordable early commemorative, with even superb gem pieces readily available and reasonably inexpensive. Circulated examples also exist, which might be an affordable way to get into early commemoratives, with a very interesting (both historically as well as politically) issue that should get the attention of many people, collectors as well as others.