The Royal Australian Mint has released a new coin featuring Steve Irwin as part of their Inspirational Australians collector coin series. The series recognizes and celebrates individual achievements and commemorates unique Australians who have made an extraordinary contribution to society. Steve Irwin is honored as the second release of the series. 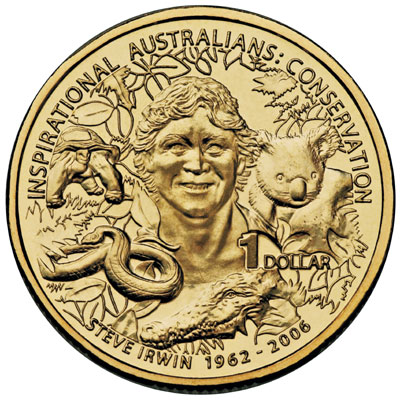 The coin was officially launched at the Australian Zoo by Graham Smith, Acting Chief Executive Officer of the Royal Australian Mint, Terri Irwin, and Sanchez the Alligator. The ceremony took place ahead of Steve Irwin Day on November 15, 2009.

The $1 face value coin is struck in aluminum bronze. The coins have a weight of 9 grams and diameter of 25 mm. The coin image features a grinning Steve Irwin, surrounded by wildlife and wilderness, as designed by Caitlin Goodall.

The Royal Australian Mint is offering the 2009 $1 Uncircualted Steve Irwin coin in illustrated packaging for sale on its website. The product is priced at AU$12.95.