The spring convention of the American Numismatic Association was held in Portland, Oregon this year, from March 5 through March 7. As part of the show Stack’s-Bowers held a relatively small auction of United States coins, many of which had been off the market for quite some time, and were certified by PCGS or NGC (in many cases) several decades ago. The auction realized some strong prices, which certainly proves that you don’t need to have an auction with thousands upon thousands of lots to have a noteworthy auction with interesting items. In this recap we will take a look at some of the higher priced coins which were sold during the floor session on March 6. Please note that all prices include a 17.5% buyers premium.

Lot 245 was the finest known Proof example (graded NGC PF-65) of the 1839-O Reeded Edge Half Dollar, one of just four confirmed proofs known to exist. The piece, pedigreed back to the Robison collection that was sold in the early 1980s realized $193,875, making it the most expensive coin at the sale. While Proof coins from the New Orleans Mint are prime rarities no matter what, an early proof such as this 1839-O is a rarity which is surpassed by very few coins within the American series. While the exact circumstances of the creation of this coin are not known (it was struck shortly after the very rare 1838-O Reeded Edge Half Dollars were struck, probably in early 1839) it is a coin that is sold infrequently and every appearance of a Proof New Orleans coin is heralded by specialists.

As we wrote in our auction preview, 19th century proof gold coins are among the rarest of the rare in American numismatics, and an offering such as lot 424 is a delight for the specialist. That lot was the finest known 1869 Proof Gold Eagle, graded PF-67* UCAM by NGC, which realized $158,625. One of only a few coins certified as Ultra Cameo by NGC, it is generally estimated that less than a dozen proofs of this issue still exist, from an original mintage perhaps double that number. While collecting a date run of the series in proof would be a momentous task that could take a lifetime (or two), early proof gold is always in demand, as this result proves again. 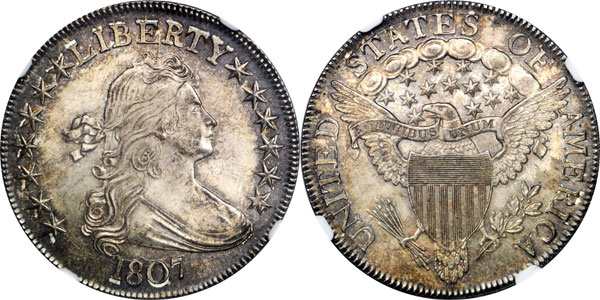 One coin that exceeded expectations was lot 225, an NGC MS65 graded 1807 Draped Bust Half Dollar, struck in the year that the design as replaced with the Capped Bust design. The piece, one of seven graded at NGC with two finer realized $129,250, setting a new record for this particular issue (at least according to our research). While any early half dollar is an obvious rarity in gem uncirculated condition this was a particularly choice example that could very well be called the ultimate type coin for the Draped Bust/Large Eagle Half Dollar series, which was produced from 1801 to 1807. 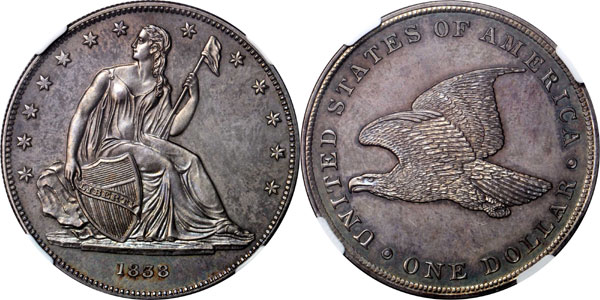 Another coin that set a new standard for the issue was lot 334, a restrike 1838 Gobrecht Dollar graded PF-64 by NGC. Designated as Judd-84, Pollock-93 and considered a rarity-5 (31-75 known), the coin is one of the scarcer varieties in the rare Gobrecht Dollar series. The piece realized $82,250, which is closer what some gems of the same issue have previously realized at auction. Gobrecht Dollars are an interesting and underrated series that is the predecessor to the better known Seated Dollar, produced from 1840 to 1873. While all known examples are struck in Proof format (including many restrikes, which might have been made as late as the early 1870s) some did circulate, and many collectors consider it an integral part of the silver dollar series. 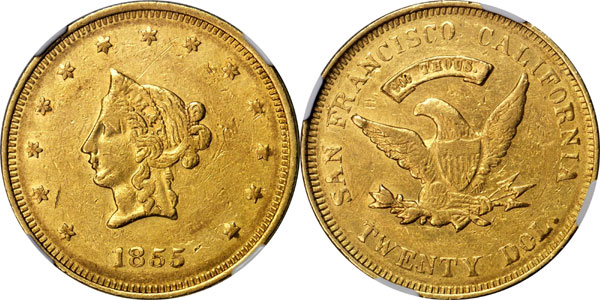 A number of territorial gold pieces were offered as well, but interestingly enough the 1849 $5 from the Oregon Exchange Company failed to sell, despite it being offered in the state where it was originally struck. One piece that did sell was offered as lot 538, a rare small head 1855 $20 Gold Piece struck by Wass, Molitor & Co and graded MS-60 by NGC. A rare piece of history from the California Gold Rush, the coin realized $76,375. The design of the coin appears to be taken from a $10 gold piece, with a surprisingly small head and a crudely executed eagle on the reverse. The piece was struck in a time when a Federal mint had already been established in San Francisco, but where gold and silver coin remained rarely seen in circulation in the West. Those that did circulate (including numerous private issues) would eventually be melted, and many of these territorial gold coins are true rarities, especially in high grade, explaining the price realized for this condition census rarity. 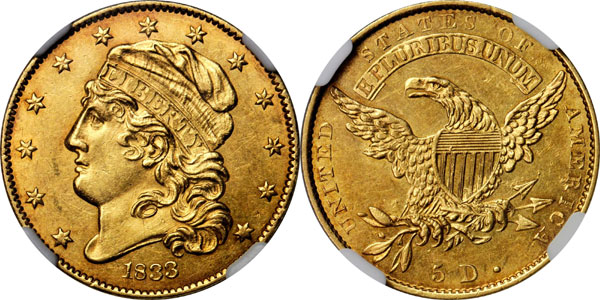 The final coin we would like to mention is another gold coin, offered as lot 407, an 1833 BD-2 $5 gold piece or Half Eagle, graded MS-61 by NGC. Early Half Eagles prior to the late 1830s are among the rarest gold pieces, despite rather generous mintages for most dates. With many pieces melted and lost, survival rates are very small, with perhaps a few dozen known of this particular variety at most. The piece, among the finest known of the date, realized $64,625. Very few examples of this variety have been offered at public auction in the past few decades, making this truly one of those coins where you should buy it if you see it, as it might be years before you see another one offered for sale.