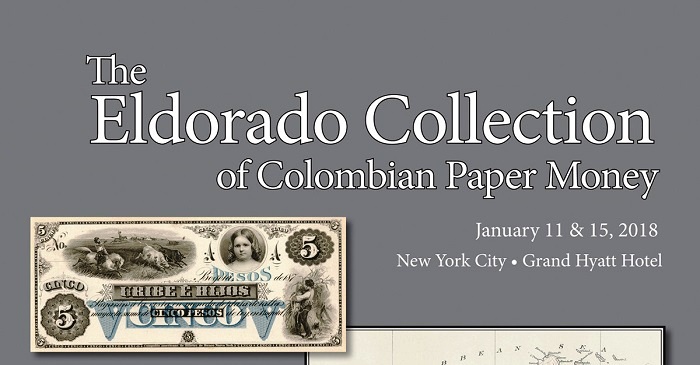 Stack’s Bowers Galleries will be showcasing the first installment of The Eldorado Collection of Colombian Coins and Paper Money as part of their official auction January 11–13, 2018, during the New York International Convention at the Grand Hyatt Hotel in New York City. The Eldorado Collection, offered in two auction catalogs, is an important auction event in Latin American numismatics and is the finest ever cataloged. These catalogs are the initial offerings, which feature many of the rarest and highest-grade selections from this epic cabinet.

The paper money presentation portrays the broadest view of this subject ever published in English or Spanish. The presentation commences in 1819 and continues to the present day with countless note types, from the majority of known series and issuers. The lot descriptions and their accompanying full-color images often confirm rumored examples listed, but unpriced, in the Standard Catalog of World Paper Money. Many are first-time individual offerings at public auction.

The collection includes a pair of unlisted Billete de Tesorería notes printed on watermarked paper. The Estados Unidos de Nueva Granada-Tesorería Jeneral issue is well represented with three denominations. Printed on frail paper, their condition is superior to most known to collectors.

The “Golden Age” of Colombian paper money (1863–1886) was launched upon the contracts made with the American Banknote Company in New York. Colombian notes from this quarter-century span are among the most beautifully engraved by the ABNCo. The Eldorado Collection contains notes from nearly all these private issuers, including those printed locally by D. Paredes, Bogotá.

Concurrent with the issuance of the private “bancos,” commencing in the early 1880s, were notes printed by the ABNCo. for the Banco Nacional. These “national bank notes” were backed by the federal authorities, and this bank was the precursor of the current banking system in Colombia. In addition to issuing its own notes, the bank apparently acted as the clearing house for the private banks. Remainder notes from several of these private banks were overprinted for the Banco Nacional in Bogotá during the civil war, and the current sale includes the widest selection of them cataloged individually in any auction sale.

American Edwin Kemmerer had already worked with other Latin American economies when he was summoned to work with the Banco de la República for Colombia. In 1923, Law 25 created the bank which would authorize the Peso Oro on a gold standard, control exchange rates, make loans, and perform as a state bank. The 1923 Colombia series and onward coincided with this law and are recorded in the second ABN sale record book offered in this sale.

Lot viewing will be available at the Stack’s Bowers Galleries Santa Ana office before the sale, as well as in New York City in their offices at 123 West 57th Street and on-site at the Grand Hyatt Hotel immediately prior to the sale itself. Check the website of Stack’s Bowers for specific dates and times. For more information on bidding in this event, please contact .

Stack’s Bowers Galleries is accepting consignments for the April 2018 Hong Kong sale and beyond. Contact a consignment specialist at 949-253-0916 or via email at .