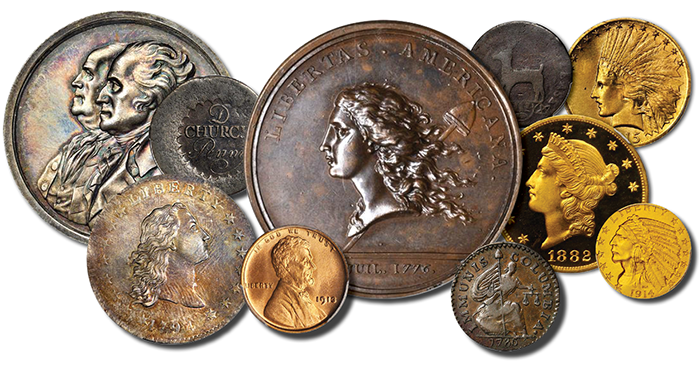 Stack’s Bowers Galleries will be offering world-class collections as part of their Official Auction of the Whitman Coins & Collectible Expo next week in Baltimore, Maryland. Anchored by the Blue Moon Collection, Part I, and the collections of Dr. Gordon Shaw and Anthony Bettencourt, this event will showcase fresh, high-quality material that many collectors will be eager to bid on.

The auction begins at 4:00 (ET) on the afternoon of Wednesday, March 29, with Session I, which will feature numismatic Americana, colonial and related issues, and early American copper. The tokens and medals offered in this session comprise both collector favorites and historic rarities, including scarce Betts medals and Indian Peace medals from several nations. A gorgeous Mint State-62 BN (NGC) example of the “1781” (1782) Libertas Americana medal will be offered in lot 8 (above). From the auction listing, lot 8 is “an especially appealing example of this classic rarity. . . Only about 100 to 125 or so examples are known in bronze. . . There is perhaps no medal or coin that speaks so loudly about the birth of the United States of America than the Libertas Americana medal.”

Lot 8 will quickly be followed by a rare 1783 Franklin and Washington medal, Betts-617, in lot 12 (above). It is described in the auction listing as “an exceptional, virtually Gem-quality example of this very rare medal. . . Sharply struck, even the presence of the major United States cities of the day can be discerned on the map at the base of the reverse. This is a very rare type with only a handful of examples known, the present specimen one of just six piece positively accounted for.”

The 1845 James K. Polk Indian Peace medal in lot 42 (above) represents one of just 11 large-size examples issued in silver and is a significant opportunity for enthusiasts of this series. As the auction listing states, “All James Polk Peace Medals are rare. While a total of 260 medals were struck for this administration (counting all three sizes combined), the vast majority were returned to the Mint in December 1849 and melted. Just 11 examples of this very desirable large-format version were either awarded or saved.”

The collection of Anthony Bettencourt is strongly represented in this session by highlights such as the legendary 1739 Higley copper (lot 168, above; top left) and the scarce Undated (1790) Albany Church Penny (lot 376, above; top right). The Wednesday-afternoon session will also feature many rarities from the collection of Dr. Gordon Shaw, most notably a stunning 1786 New Jersey copper / Immunis Columbia muling in lot 220 (above, bottom) followed by more than 140 additional New Jersey coppers, many of them quite rare.

The auction continues on Thursday at 10:00 a.m. with the offering of small cents through quarters in Session 2, leading up to the presentation of the Blue Moon Collection, Part I, in Session 3 at 2:00 p.m. This inaugural installment includes an array of rare and high-grade U.S. coins that range from the earliest years of the U.S. Mint up through the World War II era. The Blue Moon Collection was started more than 50 years ago and comprises chiefly private acquisitions from Stack’s along with astute auction purchases from many of their most famous sales of the 1970s and 1980s.

Part I is highlighted by an AU-58+ (PCGS) CAC 1794 Flowing Hair dollar in lot 2534 (above). In the words of the auction listing, “No coin in the canon of American rarities combines historical gravitas and numismatic importance quite like a 1794 dollar. The United States dollar began as a copyist’s attempt to capitalize upon the international success of the Spanish milled dollar, the famous eight reales or ‘piece of eight’ that had been struck for a century and a half by the time the United States Mint opened its doors. The American dollar was not only a toe hesitantly plunged into the waters of international commerce but a bold statement of the new nation’s sovereignty and ideals: economic strength combined with liberty. . . Just 1,758 were released (and not made particularly well, at that). All of the bullion came from a single source, who just happened to run the place: David Rittenhouse, the first director of the Mint. Planchet production was difficult, with manual labor required to get each close to the correct standard, but even then the silver was not refined to the legally required fineness. The beginning of the silver dollar was very humble indeed.” Only 150 or so remain in existence.

In addition, crossing the block will be a showcase of original Proof sets beginning with 1865, a nearly comprehensive run of half eagles from 1795 through 1929, nine stunning Gobrecht silver dollars of assorted varieties, and additional exciting lots. This cabinet, which has been off the market for several decades, has just now been certified for the first time, and is truly “fresh” to the numismatic market.

Session 6 will begin at 10:00 on Friday morning, when half dollars, silver dollars, and gold coinage will cross the block. Internet Only sessions 7 and 9 will open for live bidding at 9:00 a.m. (PT) on Monday and Tuesday of the following week, respectively. In conjunction with the Stack’s Bowers Whitman Expo auction, the D. Brent Pogue Collection Part V will be offered at 6:30 p.m. on Friday, March 31, at the historic Evergreen Library and Museum on North Charles Street in Baltimore.

The sale is currently available for viewing and bidding online at StacksBowers.com. For more information, or to secure copies of the auction catalogs, call Stack’s Bowers Galleries at 949-253-0916 or email .   ❑

Compiled with the aid of catalog listings from the above mentioned auctions and a press release courtesy of Stack’s Bowers Galleries.