SANTA ANA, CA. — Stack’s Bowers and Ponterio is pleased to announce the results of their April 2016 Hong Kong sale of Chinese and Asian Coins, Currency and Medals. This sale produced solid results, with over $2 million realized at the close. (All prices realized include the standard buyer’s premium).

Bidders did not hesitate before setting off the fireworks. Within the first hour two Li Yuan Hung Dollars, L&M-43 and L&M-44, rocketed past all expectations to close at $20,315 and $26,290 respectively. The pair of “with hat” varieties were both high grade original examples. Combined, they realized more than double their high estimates.

As always, the April sale brought exciting fresh material to market. Few offerings in any sale can generate the type of collector enthusiasm that was attracted by lots 80077 through 80084. These lots comprised six different Pattern Junk Dollars, produced at mints around the world, including Rome, Osaka, London, Philadelphia and Vienna. Each coin displayed a different portrait of Sun Yat-sen, with variations of the junk reverse. Collectively, these lots garnered over $200,000 with several individual coins approaching $50,000 each. 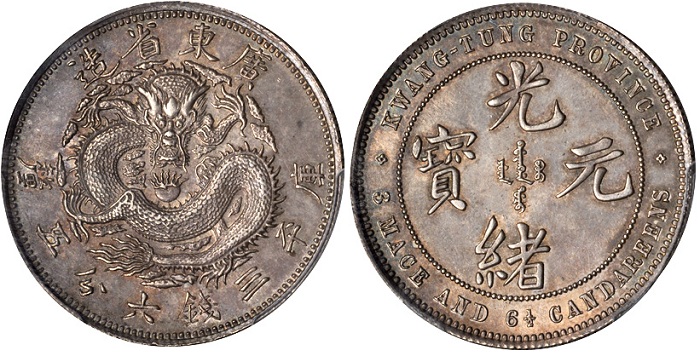 The set was a reminder of how rarity, outstanding preservation and high collector demand can combine to propel results. The same phenomenon held true with lot 80196, a very rare pattern 3 Mace 6-1/2 Candareens “reversed pattern” from Kwangtung. The price realized of $52,580 beat high estimate by more than $15,000 after heated competition saw no fewer than nine live bids near the close.

Leading off the medal section, was lot 80283, an extremely rare Qing Dynasty gold merit medal issued by Li Hung Chang and illustrated as the plate coin in Gongqing Li. Finishing toward the high end of estimate, the piece realized $35,850. A few minutes later, lot 80291 stunned bidders and spectators alike, realizing $47,800 on a $20,000 to $30,000 estimate. The Tientsin Tutung Yamen Gold Medal had nearly perfect enamel, and is possibly the finest surviving example of the type in gold. 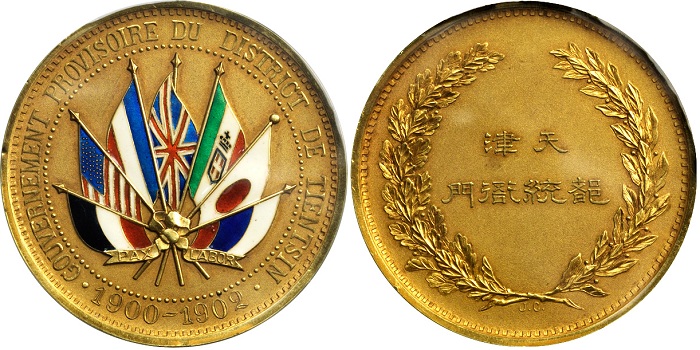 Included among the wide array of modern Chinese issues was a key date 1995 Panda 50 Yuan. Grading Choice Brilliant Uncirculated, the piece saw keen interest that pushed the final price to $21,510 or about a third above high estimate. High demand was seen in many of the Lunar Series coins, with lot 80352 providing convincing evidence of market strength. The 1984 Year of The Rat 150 Yuan graded PCGS Proof-68 closed at $14,340 or more than 50% above high estimate.

The sale continued to World Coins, with several museum quality pieces bringing solid results. In the case of lot 81033, the term “museum quality” was quite literal, as the piece was once part of the Melbourne Mint Museum collection. The 1935 Hong Kong 10 Cent piece was the finest graded at NGC by a three-point margin, and hammered at $5,975, toward the high end of estimate. Also notable was lot 81078 from Mongolia, a 1999 Lunar Series 50,000 Tugriks, which closed above high estimate at $8,365. Serial numbered “1” from an emission of 99 pieces, the piece represented an opportunity to acquire a unique coin.

The Internet-only sessions achieved solid results to close out the sale, with the coin session in particular exceeding high estimate by a comfortable margin, and with a better than 90% sell through rate.

Overall, for both bidders and consignors the recent Hong Kong sale was a resounding success. For those considering consignment to a future Stack’s Bowers sale, the firm is currently accepting consignments for the August 2016 Hong Kong Sale as well as the August 2016 ANA World’s Fair of Money sale. Consignment specialists can be reached at 949-253-0916 or via email at .