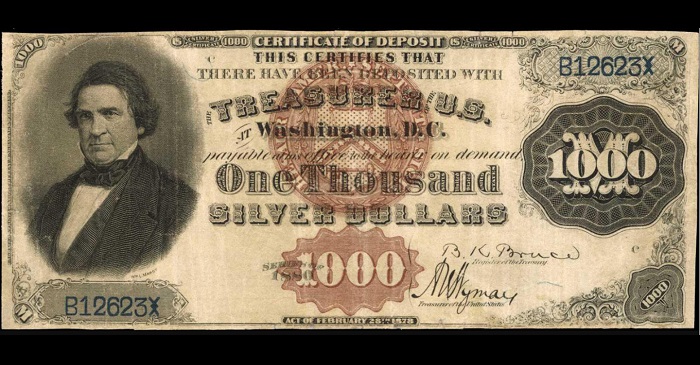 The World’s Fair of Money, held this year in Philadelphia, PA, is considered the major numismatic event in the United States. This week-long happening attracts collectors and dealers from around the world, and with it come a number of auctions held by various auction companies offering thousands of different numismatic items. In this first preview article, we will take a look at the U.S. paper money that will be auctioned in various sessions by Stack’s Bowers, highlighted by part II of the Anderson collection of United States Paper Money. All lots, as well as all other lots in this auction, can be viewed in detail on the Stack’s Bowers website. 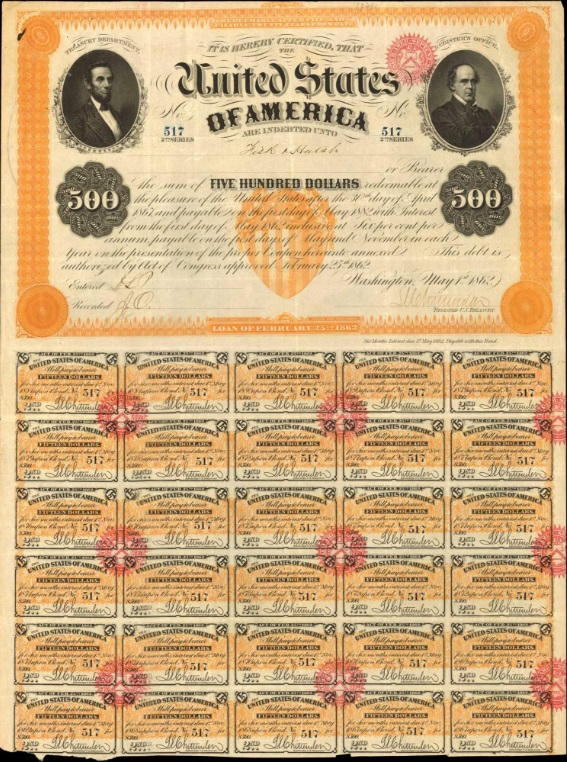 The first session of U.S. paper money will be held the evening of August 14th and includes the John E. Herzog Collection of United States Treasury bonds. While outside the scope of many traditional collectors of United States paper money, these bonds placed a crucial role in the development of the United States and are very collectible in their own right. Lot 10026 for example, is an 1862 $500 6% Coupon Bond. Issued during the American Civil War, only nine out of 39 coupons were redeemed for interest payments, which is very unusual for a bond such as this. The bond features portraits of Abraham Lincoln and Salmon Chase — the same portraits that can also be found on various banknotes issued at later dates. This was an amazing item used to finance the war for the Federal government.


On August 16th at 6:00 p.m. the second part of the Joel R. Anderson collection of United States Paper Money will cross the auction block. If you have not seen this collection, of which the first installment was sold earlier this year, we urge you to take a look at some of the highlights. It is unlikely you will ever see another collection of this scope and quality of United States paper money (and more sessions are coming). Covering all major types of United States currency issued from 1862 on, it is difficult to select just a few pieces as absolute highlights, as almost all are worthy of a paragraph or two in this article.

$2 bills are one of the most misunderstood notes in the United States. If you are not a collector, you might think that they are no longer printed and that they are rare. Of course, numismatists know that this is not true, but there is still something special about the denomination. While millions have (and are) being printed, it all had to start somewhere, and that somewhere is lot 2007. It is the very first $2 note ever printed by the Federal government. Identified as Friedberg 41b, it is the serial number 1 note, series 1, of the 1862 $2 legal tender note, and is graded Very Good 8. A note known to the numismatic community since the early 1970s, its survival is a pure miracle, but its historical significance cannot be underestimated. 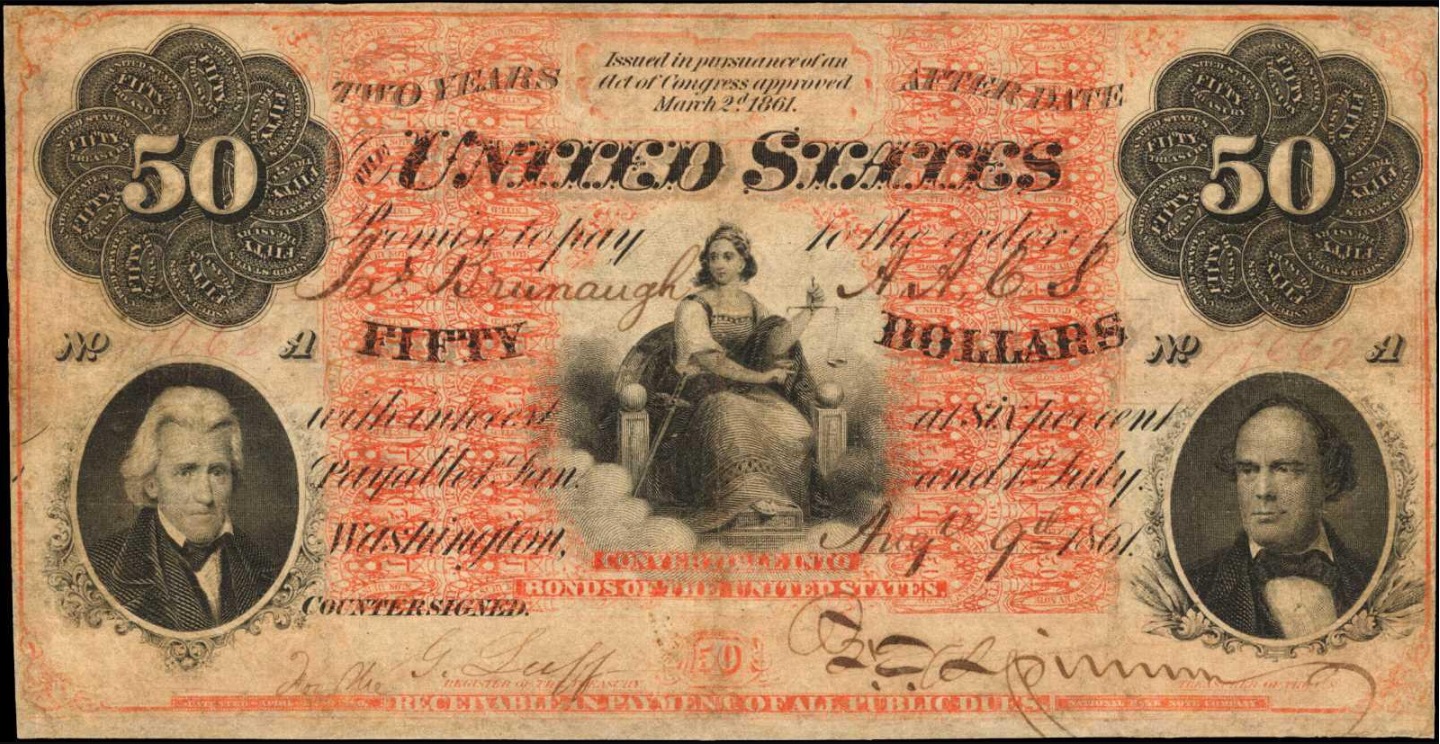 Another highlight is lot 2021, the unique 1861 $50 Interest Bearing note (Friedberg 202a), graded Very Fine 25. Not only is it the only example in existence of this Friedberg number, it is the only survivor of any of the 1861 Interest Bearing notes (they were issued in four denominations). Payable in treasury bonds two years after issue, only this example is known fully issued and uncancelled. As these Interest Bearing notes did not circulate much (if at all) among the general public, one can imagine that it ended up forgotten in a bank vault somewhere, until many years later, when it was found and could no longer be redeemed. A major rarity and for the specialist of United States currency an opportunity unlikely to be repeated in the future.

The final two lots of the Anderson collection to take a closer look at are lots 2039 and 2041, an 1880 $500 (Friedberg 345c) and $1,000 (Friedberg 346d) Silver Certificate of Deposit. Only a handful are known of each of these high denominations, with even fewer in private hands. The $500 is graded Very Fine 20 and the $1,000 is graded Very Fine 25. While any large size $500 and $1,000 notes are rare, these silver certificates are major rarities meant to be traded internally between banks, and the general public would probably have never seen these (and not just because these represented a huge sum of money in the 1880s). Even today, very few collectors will ever have a chance to own these rarities, as they come up for auction very infrequently, and at the moment only a few are in private hands.

After the Anderson collection finishes, the second part of the regular sale continues the same evening. After so much power in the Anderson sale, it is hard to believe there are more highlights in the regular sale. Small size gold certificates are a very limited series, issued briefly in the late 1920s and early 1930s. Of these, the $500 denomination is very rare, with only a total of perhaps 100 known in all grades. Lot 11209 is an amazing Gem Uncirculated 65 EPQ example of Friedberg 2407, the $500 1928 Gold Certificate. One of the finest known, the colors are bright and the eye-appeal is a good as you can get on a small size gold certificate.

The final lot we will take a look at is lot 11226, a $5 1929 Type 2 National Banknote on the First National Banknote of Ketchikan, Alaska, graded Gem Uncirculated 65 EPQ. Issued before Alaska became a State, any Alaska national is scarce and in demand, but particularly in such choice condition. According to the auction description, about 35 notes are known from this bank, located in what today is a city of about 8,000 people located in Southern Alaska. For people collecting the rarest nationals or national banknotes from Alaska, this could easily become the highlight of their collection, thanks to the scarcity of the bank, the state, and the pristine condition the note is in.