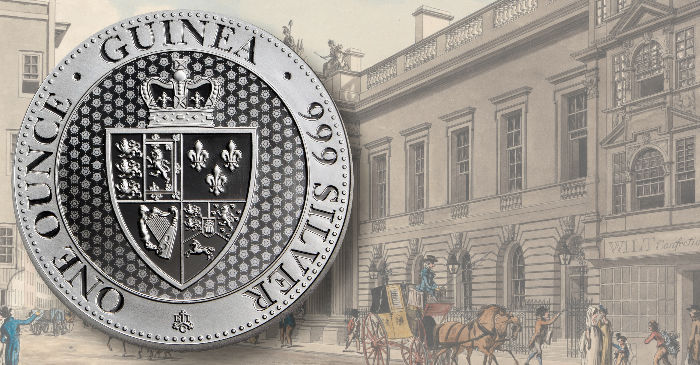 The government and treasury of St. Helena, in association with the East India Company, have issued a new silver coin that launches the bullion coin programme which will be under the guidance of the East India Company. The new silver one-ounce coins, which are official legal tender in Saint Helena for one pound, includes a reverse design that features the historic shield that was depicted on the gold spade guinea — first issued in 1787 during the reign of King George III. The guinea denomination itself was first introduced by Charles II in 1663 and has the distinction as being the first English machine-struck coin. Originally worth one pound (or 20 shillings), over time its value fluctuated with the price of gold until 1717 when Britain adopted the gold standard and its value was fixed at 21 shillings. The “spade” guinea was so-called due to the shape of the shield seen on its reverse which contained the various representations of the British Kingdom that resembled a shovel or spade. It is also noteworthy to mention that the coin’s moniker of a “spade” may have alluded to the nickname of King George III who was known as “the farmer king” or “Farmer George” since His Majesty was known to prefer his time in the countryside tending to his gardens and also showed a keen interest in agriculture. The coat of arms, which is depicted on the new silver bullion spade guinea ounce coins, includes the crests representing the realms within the United Kingdom during the near 60-year reign of King George III.

1) England and Scotland: These separate kingdoms were united in 1603 with the accession of King James VI of Scotland to the English throne as James I. The act of union was approved to form Great Britain in 1707 and was reflected by merging their arms into a single quarter. The three lions passant represented the three historic lands of England, Normandy, and Aquitaine — which are associated with the English crown. The Lion Rampant of Scotland symbolises bravery, nobility, royalty, strength, stateliness, and valour. The Lion Rampant stands to the right of the three lions in support of and in defence of England.

2) France: The royal arms also contained the arms of France, three gold fleurs-de-lis on a blue background, in one-quarter, dating from the claim to the French throne made by Edward III in 1340. The fleur-de-lis is a stylised lily and stood as a symbol of the king’s divine-approved right to rule. The English claim to the French throne continued until 1801 when France was now recognised as a republic and was not resumed despite the restoration of the monarchy in 1818.

3) Ireland: The royal coat of arms included the stringed argent, a gold harp with silver strings. The harp is traced back to the king of Ireland dating back to the 13th century, though the depiction of the harp has changed over time. In the 17th century, during the period of the Kingdom of Ireland, the pillar of the harp was depicted as a bare-breasted woman.

4) Hanover: With the succession of George, Elector of Hanover, to the throne as George I in 1714, the crest of the House of Hanover was added to the British coat of arms. The Hanoverian crest included representations for their traditional lands such as Brunswick with the inclusion of two lions passant. Lüneburg was represented with a lion rampant and as the crest was divided into three, the lands of Hanover were represented with a galloping horse. Also included was a depiction of the imperial crown of the Holy Roman Empire, denoting the family’s status as electors for the office of the archtreasurer. With the accession of Queen Victoria in 1837, the Hanoverian crest was removed from the British coat of arms since she did not succeed to the Hanoverian throne.

During the years which the guinea was minted and circulated, it became one of the world’s most respected gold coinages in history carrying with it a reputation of trust and purity that became the pride of Britain’s coinage for 150 years. The inscription DECUS ET TUTAMEN, meaning an ornament, and a safeguard along with the year of the reign of the serving monarch was included along the edge of the larger five-guinea coins. These iconic words remain associated with the guinea, which is also a testament to its beauty and reliability. A symbol of Britain’s rising colonial power and economic strength, the guinea was recognised and accepted throughout the world as a reliable currency and trusted by merchants as they travelled the world on East India Company ships.

The obverse bears the elegant effigy of Her Majesty Queen Elizabeth II created by internationally renowned sculptor Raphael Maklouf. The text around the Queen’s portrait includes the name of issuing authority of St. Helena, the denomination £1, and the year 2018.

For ease of purchase, the coins are packaged in 20-coin tubes with a maximum of 20 tubes per master box, totalling 400 coins for 400 ounces. The coin is also available to purchase from one coin up to 400 pieces. For additional information on this new bullion quality silver coin issued from the treasury of St. Helena, in association with the East India Company Bullion Ltd, please visit the website of JM Bullion.