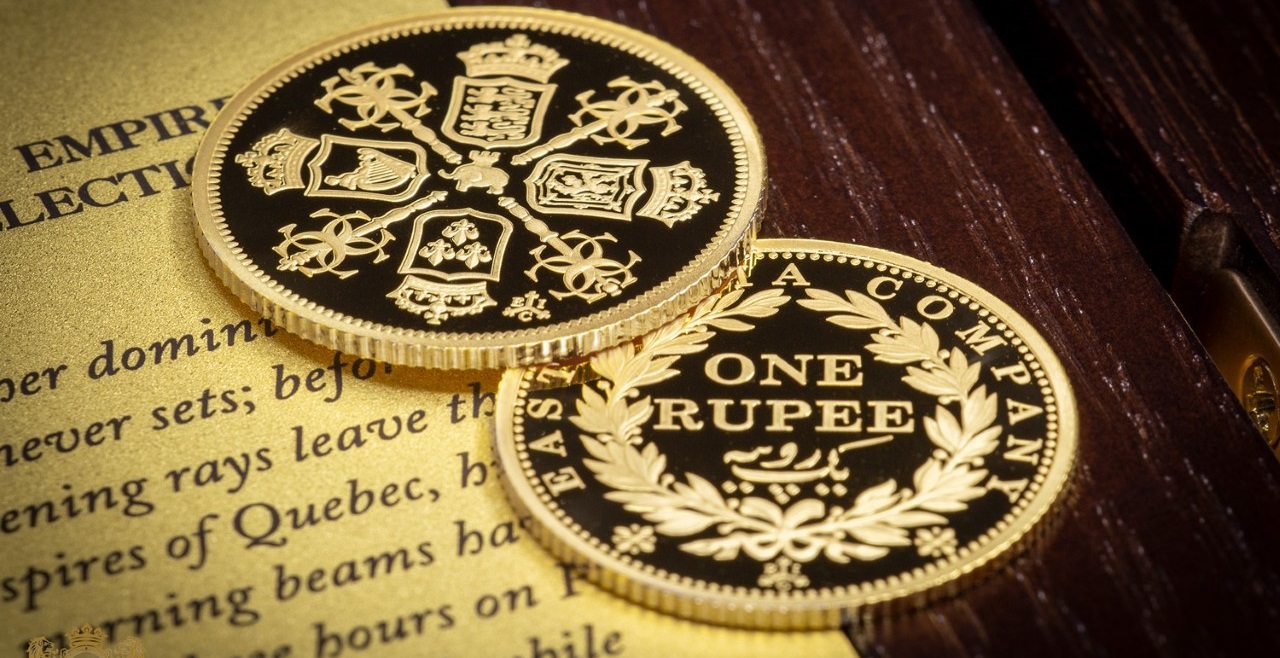 The East India Company Bullion, in cooperation with the government and treasury of St. Helena, have issued (22nd November) a new Proof-quality gold coin collection, including some of the world’s most significant coins which opened new routes of trade and shaped international commerce. Following on the great success of the first “Empire Collection” gold coin set issued in 2017, which highlighted the specific monarchs who shaped trade, the second series Empire Collection focuses on some of the more distinctive individual coins that built an empire over four centuries. They are assembled in an exclusive set, each with an exceptional story to tell about their contribution to greater international commerce, and, in many cases, local monetary stability. The need to provide a comprehensive means of trade and wealth was behind the minting of many gold and silver pieces, some of which would eventually provide the anchor to a more permanent structure of national commerce where the trade coin was introduced.

The origins of each coin included in the nine-coin collection stem from their contribution to building Great Britain’s mighty empire and the British merchants who would go on to trade with literally every corner of the globe. The collection includes coins sought after by avid coin collectors, and with a unique story behind their design, concept, and impact to local and international trade. The selection of original designs included in the collection are all intricately and expertly replicated on the reverse side of each piece, offering a great insight to the original coins from Great Britain’s first-ever trade coin (the Portcullis coins issued in 1601 to the British Trade Dollar, which was introduced in the last decade of the 19th century). Each reverse design includes the distinctive “EIC” mintmark placed in various positions. 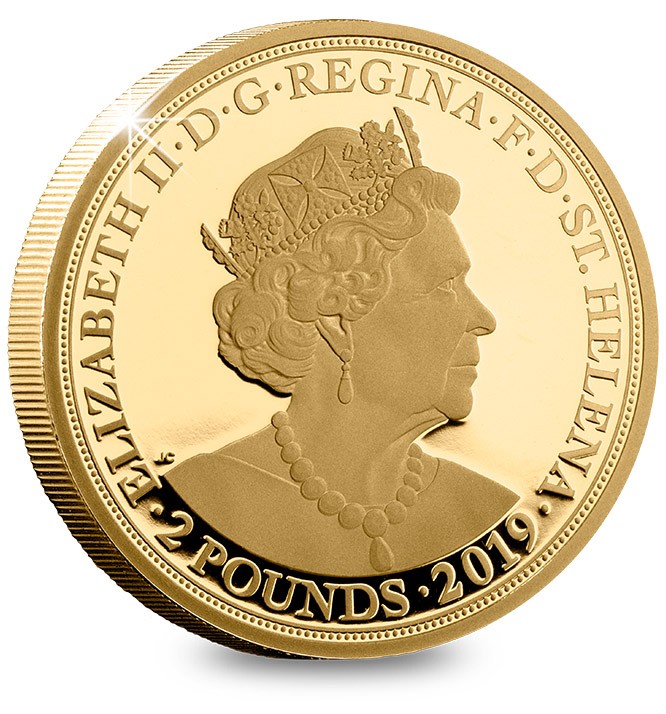 The obverse side of each coin carries the latest effigy of HM Queen Elizabeth II designed by Engraver Jody Clark, which was introduced onto Commonwealth coinage in 2016. In all, the limited edition collections offered in gold consist of nine 2019-dated coins which are issued by the treasury of St. Helena and are legal tender. The territory of St. Helena and The East India Company have a centuries-old association of coin issuance. The partnership continues to this day with the issuance of a variety of collector coins in cooperation with the East India Company Bullion. 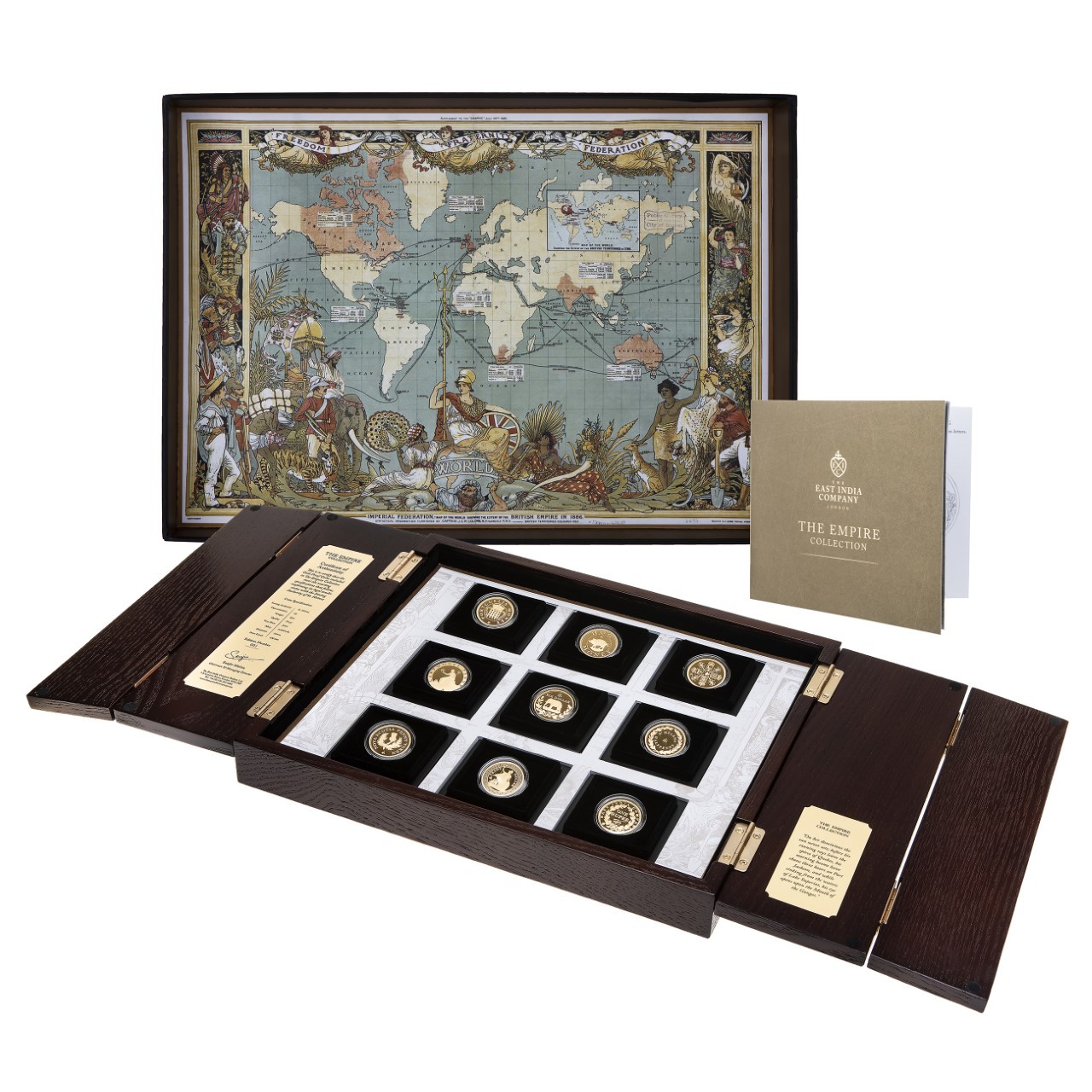 Each Proof coin in the collection is individually encapsulated and presented in an East India Company branded case which is accompanied by a booklet detailing the story behind the design of each coin. Additional information and exclusive distribution are being handled here. 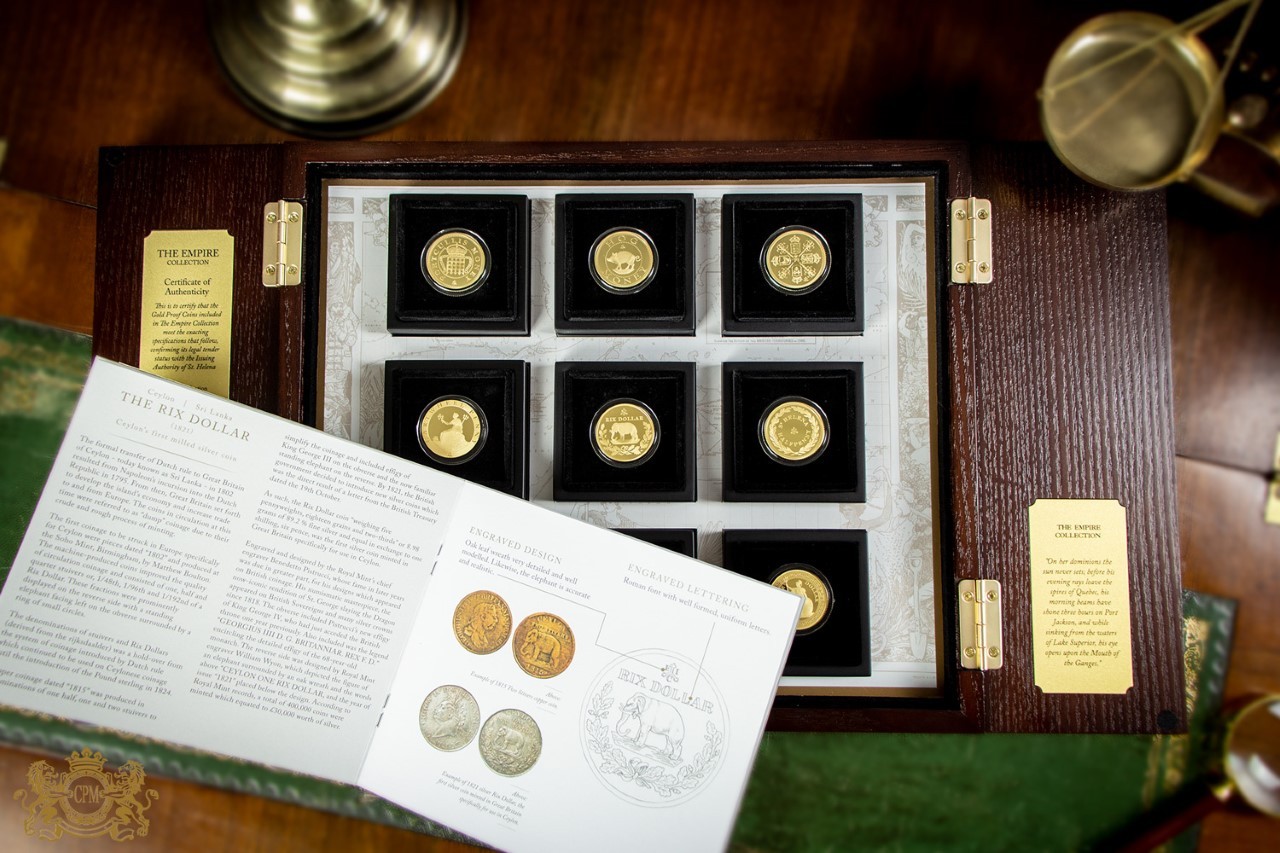 In chronological order, the coins included in the nine-coin “Empire Collection” are: Issued during the reign of Elizabeth I, she was notably responsible for reforming the coin of the Realm in 1560. This success of the initiative and maintaining the integrity of England’s coinage throughout her reign led to great economic recovery. Referred to as Portcullis money due to the emblem featured on the reverse of the coin, the ‘Testern’ was the first coin struck solely for international use. Queen Elizabeth I instructed the Royal Mint to strike these coins for The East India Company’s first voyage in 1601. 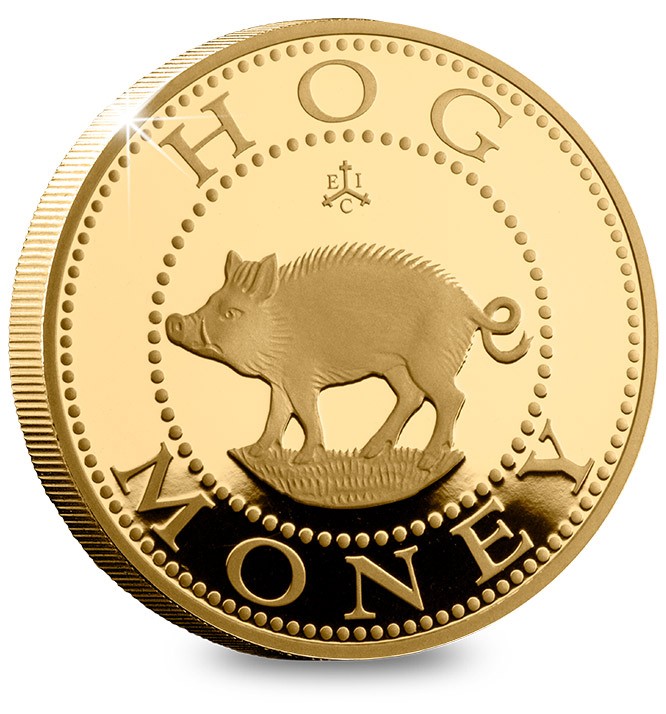 These curious coins were produced from low-grade copper or tin pieces and given a silver plating, or “wash,” to enhance their appearance. The obverse showed a wild hog with the denomination in Roman numerals above the animal and the legend SOMMER ISLANDS encircling the depiction within two rows of beads. The reverse depicted a tall ship which may have been the Sea Venture, with a single circle of beads around the border and without any legend. These coins were later referred to as “Hogge” money due to their depiction of the wild boars introduced onto the island by Spanish and Portuguese explorers a century earlier. 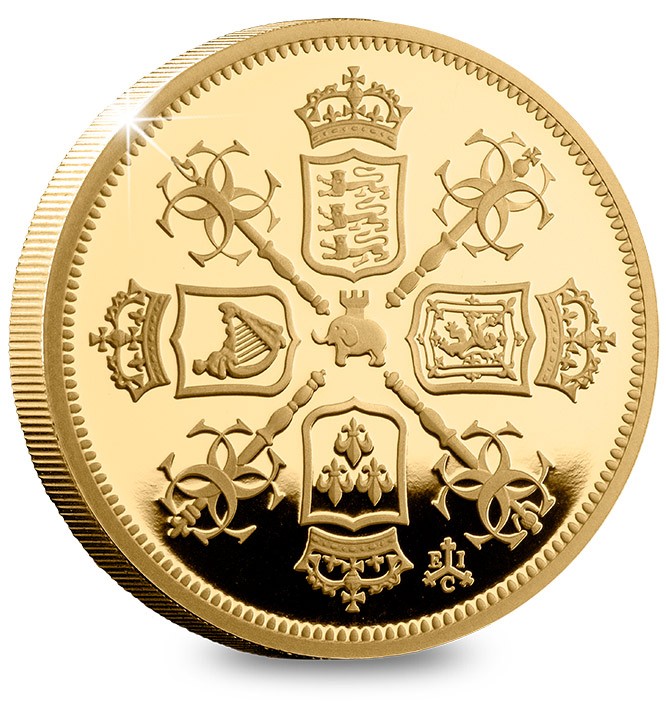 First issued during the reign of King Charles I, the first coins bore his effigy and became informally referred to as the Guinea. This was due to the origins of the gold used for their minting that was brought to Britain by the Royal Africa Company from the coast of Guinea in West Africa, beginning in 1668. A small elephant provenance mark of the company was added just under the king’s likeness and successive English monarchs denoting the source of the gold until 1722. 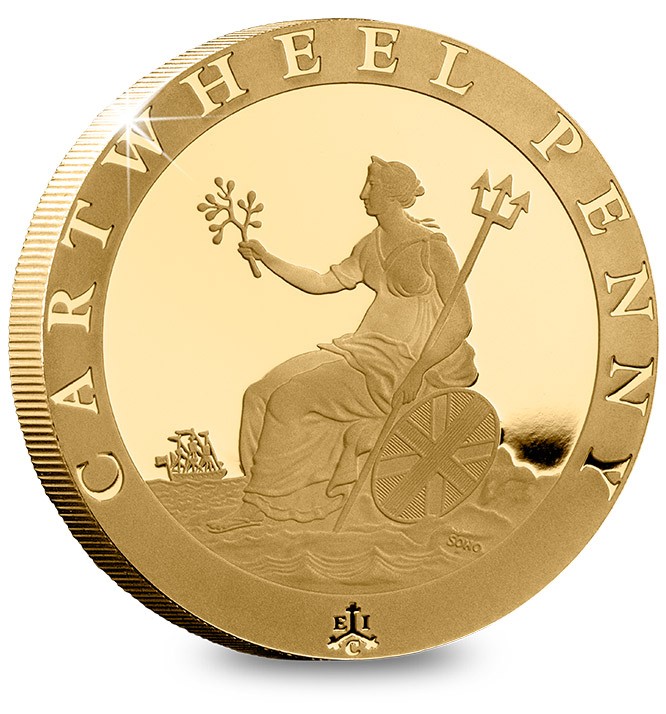 The Cartwheel Penny, The First Coins to be Exported to the Australian Colonies, 1797 – 1799

The wide rims on both sides of this distinctive coin included an incused legend on the obverse which read GEORGIUS III D.G. REX, surrounding an updated effigy of the king facing right. The reverse legend, also incused, read BRITANNIA above and 1797 below. Inside the rim is the allegorical figure of Britannia, sitting on a rock in the sea with a trident in her left hand and an olive branch in her right. Famed industrialist Matthew Boulton was granted the contract from the British Treasury to produce the new coins at his state-of-the-art Soho Mint in Birmingham. Records at the time noted that “Near four tons” of the 1797-dated pennies arrived aboard the Porpoise, which docked in Port Jackson, Sydney Harbour in 1800. 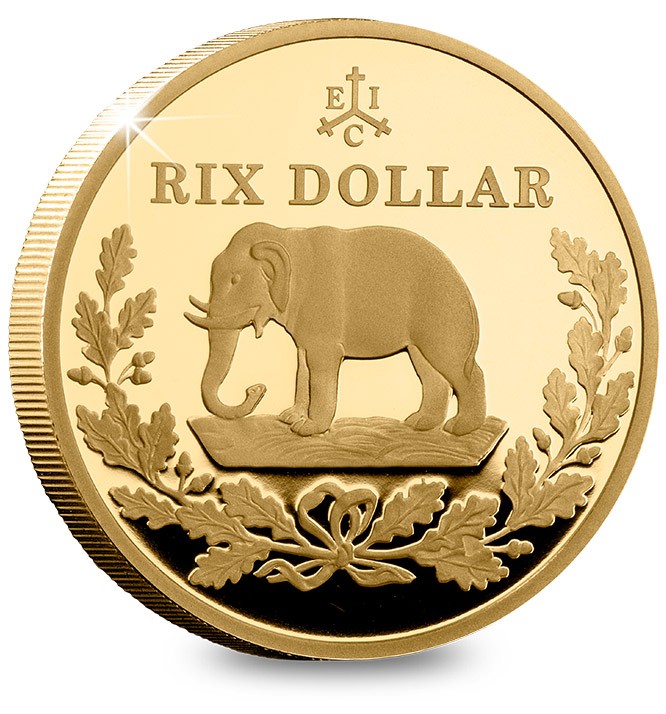 The Rix Dollar, The First Silver Coin Ever Sent from England to Ceylon, 1821

The obverse side of these coins included a new effigy of King George IV, who had acceded to the British throne the year previously. Also included was the legend GEORGIUS IIII D: G: BRITANNIAR. REX F: D: encircling the effigy of the 68-year-old monarch. The reverse side was designed by engraver William Wyon, which depicted the figure of an elephant surrounded by an oak wreath and the words above CEYLON ONE RIX DOLLAR, and the year of issue, 1821, placed below the design. 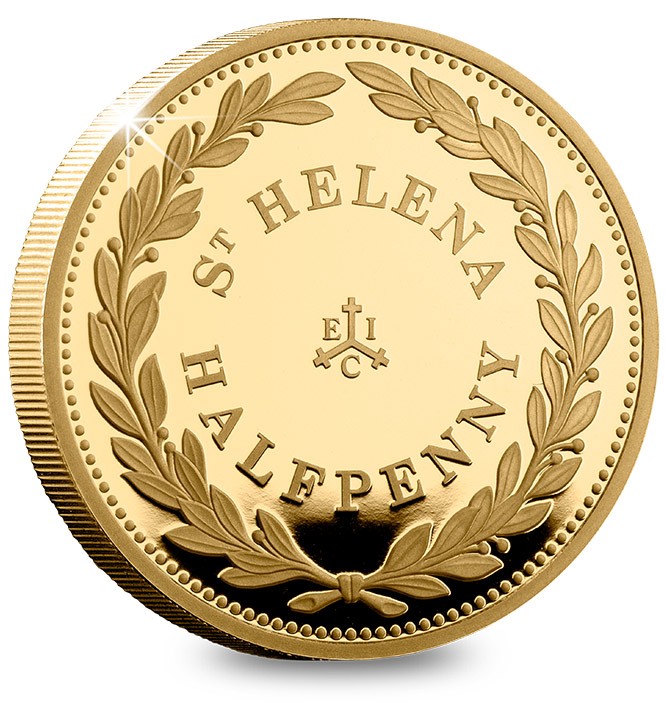 The St. Helena Half Penny, The First Local Coins to be Introduced by the East India Company, 1821

The English East India Company was granted the original charter issued by Oliver Cromwell in 1657 to govern the island of St. Helena. The charter was later reaffirmed as a Royal Charter by the restored King Charles II in 1660, which accorded them the sole right to fortify and colonise the island. St. Helena’s first local coins were introduced in 1821 and minted with the crest of the East India Company on the obverse and the inscription ST HELENA 1821 HALFPENNY surrounded by a wreath on the reverse. 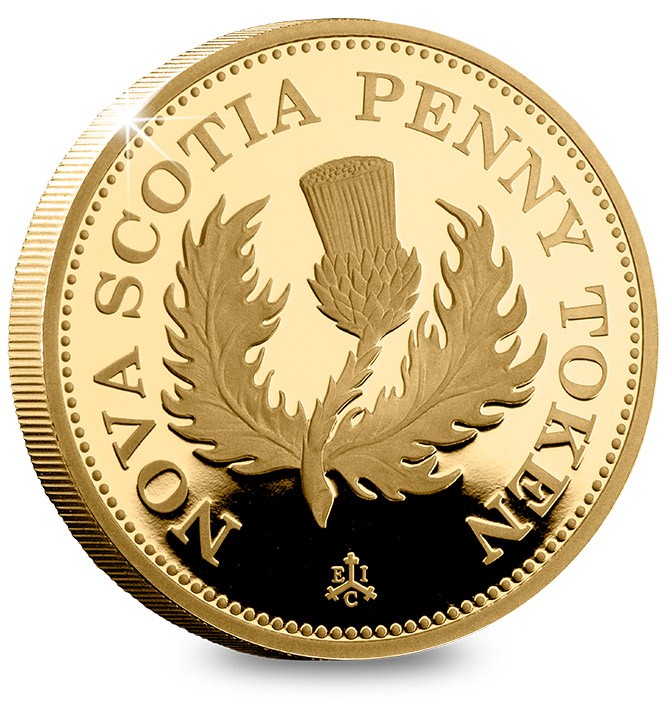 The Nova Scotia Penny, Precursor to a Unified Canadian Currency, 1824

The 1824 copper penny token included a left-facing effigy of King George IV on the obverse, and without his name around his likeness. Instead, the wording PROVINCE OF NOVA SCOTIA was placed around his effigy, while a large sprig of thistle featured on the reverse. The denomination of ONE PENNY TOKEN was placed above the thistle and the year of minting, 1824, seen just under the motif. 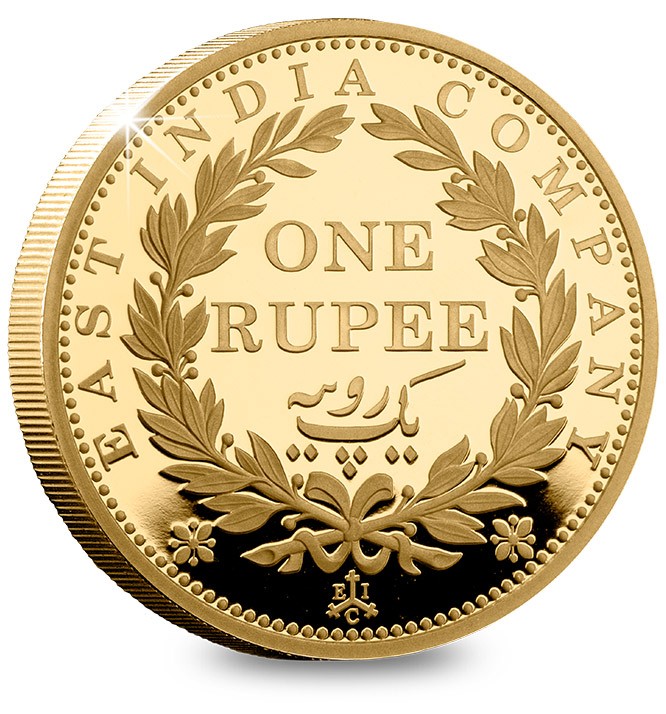 The East India Company’s proposed new standard silver rupee was implemented when King William IV declared a uniform currency across the sub-continent with the 1835 Coinage Act. The Company rupee was issued bearing an effigy of King William IV on the obverse with the legend WILLIAM IIII KING placed around the king’s likeness. The name of THE EAST INDIA COMPANY, along with a wreath surrounding the coin’s denomination, were featured on the reverse along with the year of issue. 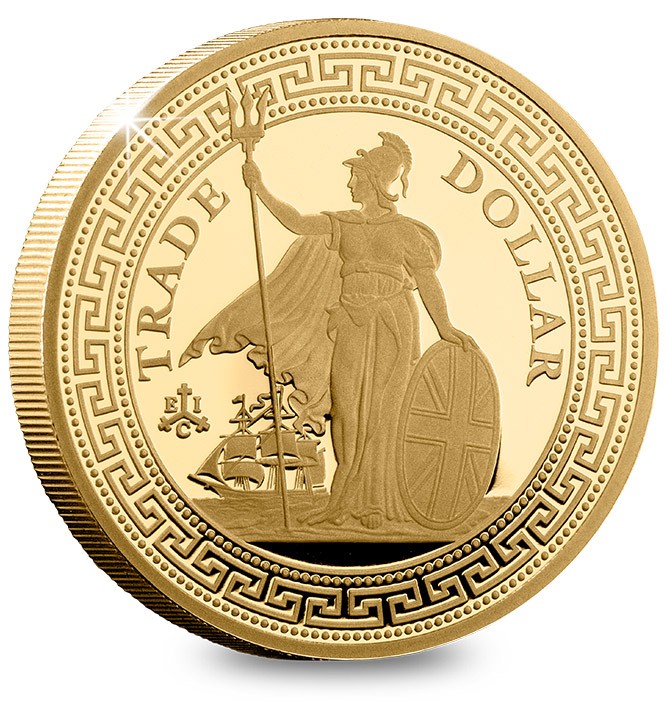 The new large silver coins were authorised by the British government in 1895 and designed by the eminent engraver George William De Saulles (1862–1903). They would feature (for the first time on a coin) the figure of a standing Britannia, helmeted with a trident, Union Jack shield, and a merchant ship in the background. As the image of Britannia was sufficient to identify the coin’s issuer, the name of the country seemed unnecessary, and, as such, there is no mention of Great Britain in the text or legend.