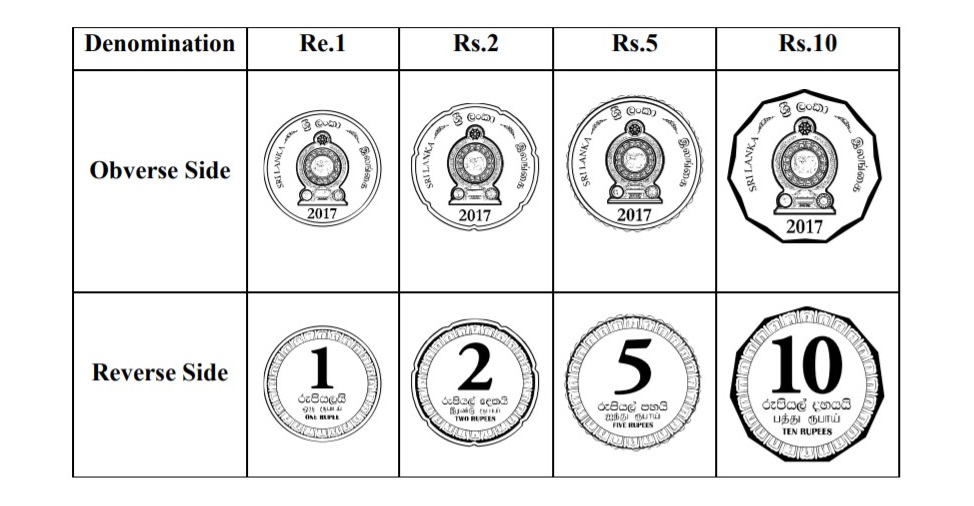 The Central Bank of Sri Lanka has unveiled (27th November) a new series of circulation coins with the face value of 10, five, two, and one rupee. The bank’s objectives for the production and issue of the new coins is aimed at reducing the cost of coin production, increasing the durability of coins, easing transport, and being easily identifiable by visually impaired people.

The first coin set was officially presented to the Hon. Prime Minister and Minister of Finance and Economic Affairs, Mahinda Rajapaksa, by Dr. Indrajit Coomaraswamy, who is the present governor of the Central Bank on the 27th November 2018.

All four denominations of coins in the new series include the year of production, 2017, and are minted from stainless steel, which the Central Bank hopes will prove to be less expensive than other metals currently utilised and will last longer in terms of durability than plated coins. The diameter and thickness of these four coin denominations are re-sized to maintain a progressive pattern and the weight of coins is reduced in an effort to reduce transport costs and ease handling. Different and distinctive edges are incorporated for easy identification of each denomination by visually impaired people.

The obverse side of all four denominations depicts a common design of the Armorial Ensign of Sri Lanka, with the word “Sri Lanka” in English, Sinhala, and Tamil languages at the periphery of the coins. The year 2017 is indicated at the bottom of the coins.

The reverse side of the coins depicts the face value of the coins in large numerals and the value in the Sinhala, Tamil, and English languages at the centre of the coins. A decoration of lotus petals appears around the periphery of the coins.

The coins are scheduled to enter into circulation from the 3rd December 2018, through commercial banks and post offices. The Central Bank has also noted that the new coins will circulate along with the existing coins of the same denominations issued previously until further notice. For additional information about these coins and others issued by the Central Bank of Sri Lanka, please visit their website.