The 1995 Special Olympics World Games Silver Dollar is a very curious issue that is for many just one of too many modern commemoratives issued in the last twenty years. The coins were produced in uncirculated format at the West Point Mint and in Proof format at the Philadelphia Mint amidst an outpouring of other issues in the surrounding years. The most noted aspect of the coin is that the design features the portrait of President John F. Kennedy’s sister, the inventor of the Special Olympics, and represents the first (and to date only) woman to be portrayed on a US coin during her lifetime: Eunice Kennedy Shriver.

When it comes to American coinage it is extremely rare to have a person depicted on a coin during his or her lifetime. In fact, to date it has only happened on five different occasions, each time involving a commemorative. The first was the 1921 Alabama Centennial commemorative, which featured a portrait of T.E. Kilby, Governor of Alabama during the time of issue. The second occurrence was in 1926, when the Sesquicentennial half dollar (celebrating 150 years of American independence) featured then-president Calvin Coolidge on the obverse together with a George Washington. Ten years later, two more commemorative half dollars also featured living persons. First, the Lynchburg, Virginia Sesquicentennial coins featured Senator Carter Glass on the obverse of the coins. Interestingly enough, Glass protested to the use of his portrait, but the designs were approved and used nevertheless. The 1936 dated (but struck in 1937) Robinson-Arkansas commemorative half dollar also featured a living person, that of Senator Joseph Robinson. And then sixty years later the first woman would appear on a coin during her lifetime. 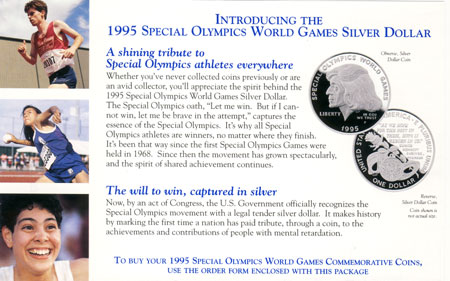 Why is it so unusual to have a living person depicted on an American coin? As an example, many countries feature monarchs on their circulating coinage, and many of the same coinage honor living persons with commemoratives. When the American coinage system was just introduced and design elements were contemplated, it was briefly considered to place a portrait of the then-president on the coins. This would mean that the design of the coins would change every four or eight years. This idea, however, was quickly abandoned (some sources say by Washington himself) in favor of a female representation of Liberty. This would continue until the early 20th century, when the first coins honoring former Presidents were issued in the form of the Lincoln Cent and the Washington Quarter (patterns with Lincoln’s and Washington portrait are known from during and just after the American Civil War but these never made it into regular production). This, however, does not necessarily mean that this was outlawed.

Early coinage acts while requiring certain design elements to be present on every coin did not place limits on the depiction of living persons on coins.. There is a dispute regarding this, however, and this is where we find the confusion on the topic. On April 7, 1866 congress passed legislation providing money for so-called “Civil Expenses of the Government”. The following was indicated:

For plates, engraving, printing and paper for national currency notes, two hundred and fifty thousand dollars: Provided, That no portrait of any living person hereafter engraved, shall be placed upon any of the bonds, securities, notes, fractional or postal currency of the United States.

The main cause of this earmark of an act that is now insignificant was the portrait of then Secretary of the Treasury Clark, who placed his portrait on the notes himself. The result, however, would last much longer. The notion that many websites make that no living persons can be depicted on any kind of American currency is generally considered to be false, as it is not specifically outlawed in the general sense. The above law has generally been read to only apply to paper money, and not specifically for coins. Exceptions, however, have recently been created, for example the legislation creating the presidential dollars specifically mentioned that no living (former) Presidents are to be depicted on a presidential dollar, meaning that the issue remains contemporary. To the contrary, however, the legislation that created the first spouse gold coins does allow a living spouse of a deceased (former) President on a coin, in case certain requirements are met.

Creation and approval of the 1995 Special Olympics commemorative dollar was more politics than anything else. Honoring the Special Olympics, which had been invented in 1965 by Eunice Kennedy Shiver, the design pays more tribute to her than to the event she created. Having been born in such an influential family was the most likely reason, as her nephew Rep. Josheph F. Kennedy II played an important role in authorizing the coinage. Even before striking the coins, however, the public opposed to the idea, as the design was rejected by the Citizens Committee on coinage design. Production and sales, however, soon commenced.

The final design features Eunice Kennedy Shriver’s portrait facing left on the obverse, with SPECIAL OLYMPICS WORLD GAMES above her. The date is below, as are LIBERTY and in GOD WE TRUST as well as the mintmark. The reverse features a quote from Mrs. Shiver: “As we for the best in them, hope is reborn in us.” Next to this quote is a depiction of the Special Olympics medal and a rose. UNITED STATES OF AMERICA and ONE DOLLAR is around the periphery. The design was a collaboration of several artists and Mint employees: Jamie Wyeth and T. James Ferrell for the obverse and Thomas D. Rogers, Sr. for the reverse.

Even though a total of 800,000 commemorative dollars were authorized, sales fell short of that. Only 89,301 uncirculated coins were sold. Proof sales were a bit better, with a total production output of 351,754. Q. David Bowers (A Guide Book of United States Commemorative Coins, Whitman, 2008) notes that initial Proof sales were much lower, but that a single company bought 250,000 Proofs to save the issue from becoming an absolute failure, giving the coins away at a later date.