The Fabrica Nacional Moneda y Timbre / Real Casa de la Moneda have launched their latest set of coins in their very popular “Treasures of the Spanish Museums” series, which debuted in 2013. This is the fourth collection and this year includes four coins–three silver and one gold. The series focuses on some of Spain’s most beloved and well-known masterpieces, capturing them in precious metals, meticulously detailed and engraved. A total of 12 paintings, many of them displayed in Spain’s various national museums throughout the country, have been selected for feature in the series. For the 2016-dated collection, the Real Casa de la Moneda have chosen the work of Jheronimus van Aken (c. 140–1516), also known as “El Bosco” as his given name was Jheronimus Bosch. The fourth series is issued in conjunction with the 500th anniversary of the death of El Bosco.

The painting chosen for the silver coins is the work entitled Garden of Earthly Delights, which is believed to have been painted between 1500 and 1505 (El Bosco was notorious for not dating any of his work). The painting was originally created as a triptych, or three-paneled painting, and is one of El Bosco’s most notable works. The outer panels are intended to bracket the main central panel, which is described as a broad panorama of socially engaged nude figures, fantastical animals, oversized fruit, and hybrid stone formation. This is flanked by a depiction of the Garden of Eden on the left panel and the Last Judgment on the right.

The silver coins in this set (a square €50 central coin, or “Cincuentin,” and two rectangular €25 coins) are minted in Proof quality and include vivid color applications to capture the extraordinary detail of the chosen works. The Real Casa also introduce two important firsts with this set, as the trio are produced in pure .999 silver, and the left and right “panels” (the two €25 coins) are the first rectangular coins to be minted by the Real Casa. When the two rectangular and one square-shaped coin are displayed in triptych form in their specially designed presentation case, the whole masterpiece can be viewed as one work, as originally intended. The set also include one gold €400 coin (traditional 8 Escudos), which depicts El Bosco’s The Hay Wain and The Temptations of San Antonio Abad.

All three paintings, with links to high-resolution images and original articles at the Museo del Prado’s website, are included at the bottom of this post.

At left, the obverse of the 400-euro gold coin, featuring the main image from the central panel of the triptych painting The Haywain, by Jheronimus (or Hieronymous) Bosch, which is shown in the Wikipedia photo at right.

The obverse design reproduces a detail of the work (another triptych) entitled The Hay Wain, thought to have been painted around 1515 by El Bosco. The subject illustrates that man, regardless of social class or place of origin, is so possessed by the desire to enjoy and acquire material wealth that he is willing to be fooled or seduced by the Devil. The lesson proposed by the artist is that we must turn away from worldly goods and pleasures of the senses to avoid eternal damnation.

At left, the reverse of the 400-euro gold coin, featuring the subject of The Temptation of Saint Anthony, by Jheronimus (or Hieronymous) Bosch, which is shown in the Wikipedia photo at right.

The reverse depicts a detail of the work entitled The Temptations of San Antonio Abad, painted around 1490; the reverse also includes the coin’s denomination and year of issue. 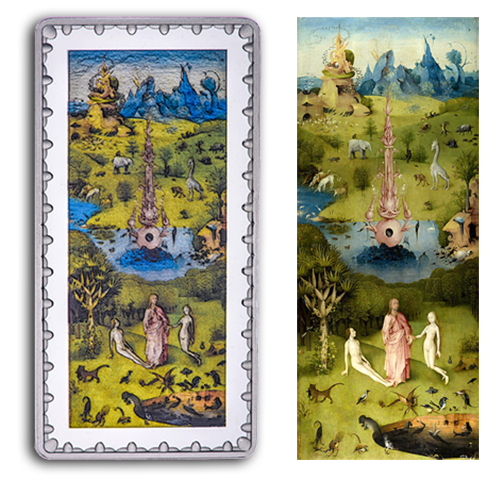 The first (€25) panel’s obverse depicts the paradise of the Garden of Eden, when God presents Eve to Adam. This atypical arrangement is contrary to the story of Creation as it does not represent the creation of Eve from Adam’s rib. Next to the first man and the first woman is the Tree of Life (an exotic dragon tree), and in the background to the right is the Tree of Good and Evil (a palm), around which the tempting serpent is coiled. 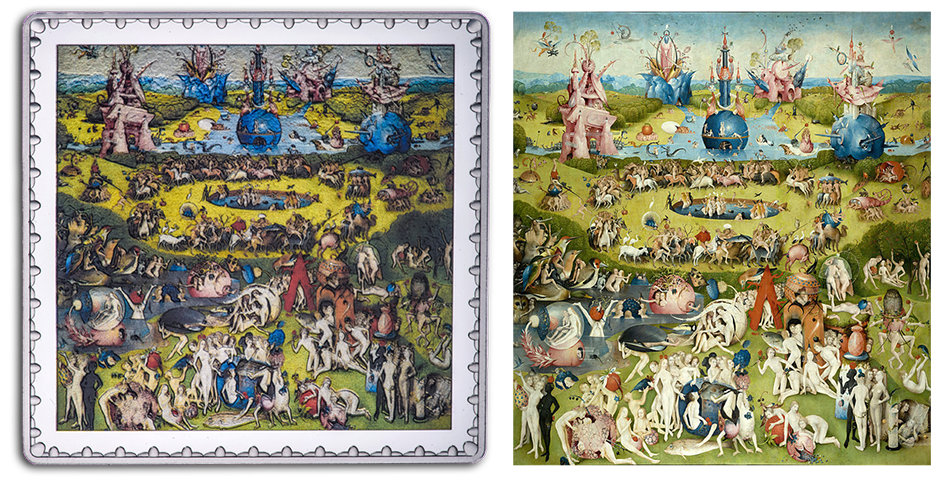 The central (€50) panel’s obverse depicts the artist’s impression of Earthly delights, detailed as a false paradise in which mankind has fully succumbed to sin, especially lust, and is fated to go to his doom. In the lower left corner of the painting, a group of men point to the table above, especially to Eve, who has been interpreted as a clear indictment of women, having succumbed to the temptation of the serpent and committed the sin for which all mankind will pay the ultimate cost. 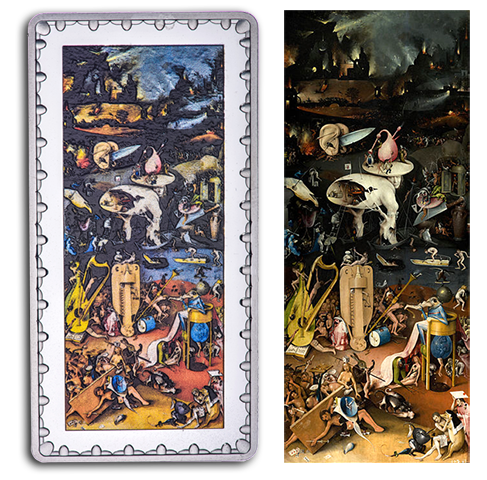 The third (€25) panel’s obverse depicts the ultimate price of sin: Hell. This portion of the triptych is known as the “musical Hell,” as there are multiple representations of musical instruments displayed (though it is unknown why El Bosco associated music with sin). He painted the torments of Hell with fire and torture, the atmosphere being totally demonic. In the lower portion, a group of gamblers appears tormented and tortured by demons amid great chaos, all of which refers to laziness, lust, and gluttony.

The reverse designs include the denomination and year of issue, along with part of the image on the obverse: in the left panel, the bringing together of Adam and Eve; in the center panel, a portion of the lower left section in which many of the figures stand upside down, representing the world as such; and in the third panel, the consumption of man by beast, symbolizing a reversal of fortune for man overall.

The masterpieces depicted on the fourth series are all on display and preserved in the Museo Nacional del Prado, in Madrid.

The silver coins are available to collectors only as a three-piece set, while the gold coin is available individually. For more information on these and other coins offered by the Real Casa de la Moneda, please visit the website of the FNMT. International sales dispatched where applicable.

The Artwork Depicted on the Coins

Each of the following paintings is held by the Museo del Prado in Madrid, Spain. Click on the photo to go to the museum’s web page. 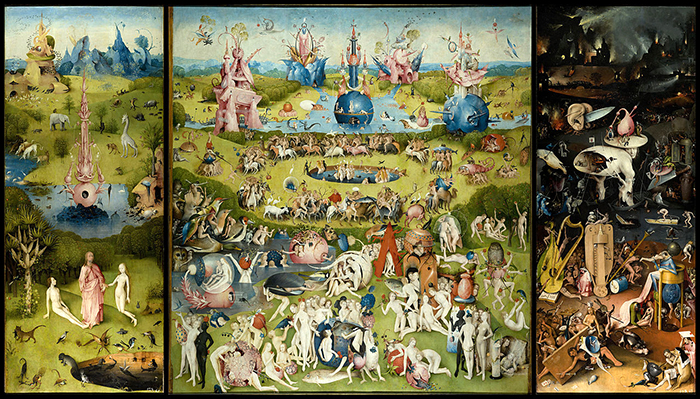 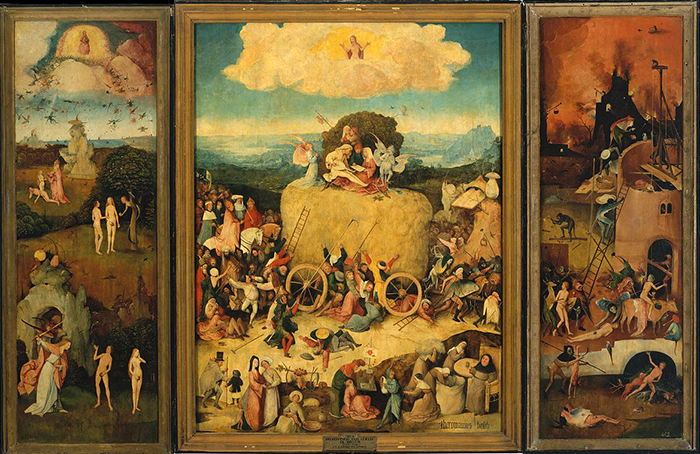 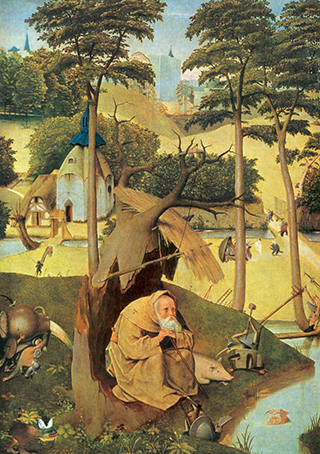