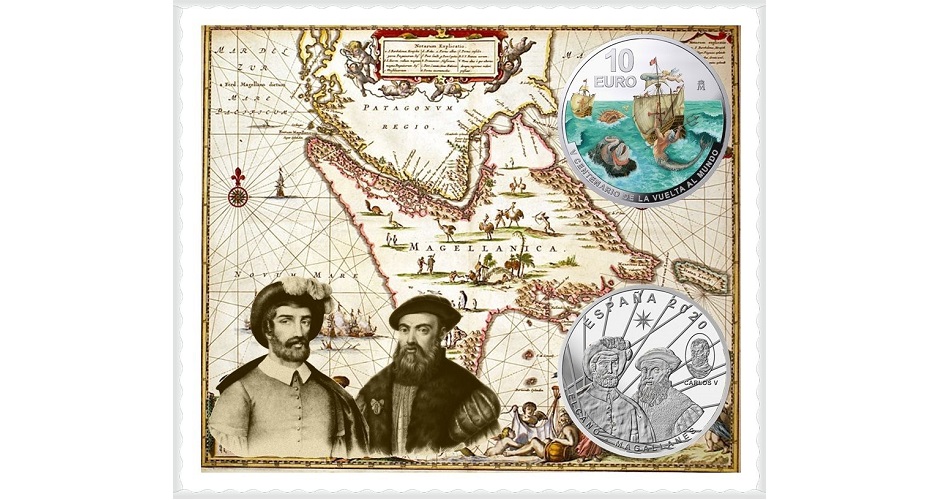 The Fabrica Nacional Moneda y Timbre — Real Casa de la Moneda has released (16th November) the second coin in a series of four entitled “V Centenary of the First Circumnavigation of the World,” which is part of their commemoration of the 500th anniversary of this extraordinary event in early exploration. Undertaken by the most noted of Portuguese-born explorers, Fernão de Magalhães (1480–1521), and known in the English-speaking world as Magellan, he instigated and organised the first circumnavigation of the globe from 1519 to 1522.

The Sea of Darkness, as the Atlantic Ocean was referred to at that time, was believed to be totally inaccessible to sailors. A chronicler of the time defined it as a vast and limitless sea, in which ships do not dare to leave the coast, because, although they know the direction of the winds, many still believed the Earth was flat and not a globe. Navigators were unsure of where they might be taken, as it was thought there was no inhabited territory beyond the edge of the seas and they would risk getting lost in the mist and darkness. Adding to the intrigue and mystery, as well as fear, it was thought that beyond the edge of the sea, there were evil monsters and mermaids that took men to the bottom of the sea.

However, beyond all the superstition and fear, it was Magellan who successfully charted a path from the west coast of Europe to the Pacific Ocean sailing through the body of water separating mainland South America from the landmass known as Tierra del Fuego. It would not be until 1525 that Spanish navigator Francisco de Hoces was blown off-course trying to sail through the Magellan passage when he discovered there was another route around the Cape Horn of South America. However, it was the 16th-century English privateer Sir Francis Drake who was also blown off-course far south in September 1578. It was this incident which demonstrated to the English that there was open water south of South America and an alternative route to the Pacific, hence the name the “Drake Passage.”

The second coin in the series is dedicated to the Crossing of the Strait of Magellan – the Sea of Darkness. The obverse side of the coin, which will be a constant throughout the series, depicts two images of Juan Sebastián Elcano and Fernando de Magellan. Juan Sebastián Elcano (1487–1526) was a Spanish Basque explorer who completed the first circumnavigation of the Earth after Magellan’s death in the Philippines. The three-quarter facing portraits are reproduced from the portraits, both of which are kept in the Naval Museum of Madrid. Above the two images is a compass rose. On the right of Magellan’s portrait and within an oval shape is a detail of a front-facing portrait of King Carlos V painted by the artist Leone Pompeo Leoni, which is kept in the Museo Nacional del Prado, Madrid. Below the king’s likeness is the wording CARLOS V. Above the primary design is the text ESPAÑA 2020 and below the two portraits is the text ELCANO MAGALLANES separated by a dash. Occupying the entire field of the coin’s design are lines representing a wind grid.

The reverse, depicted in full colour, includes an illustration of the sea with Spanish galleons and sea monsters that were conjured from men’s imagination of the day. Prominent is a merman holding a trident attempting to bring down a galleon. The little angel on top of the galleon is a representation of the winds. Below the illustration is the text V CENTENARIO DE LA VUELTA DEL MUNDO (“V Centenary around the World”). The denomination of 10 EURO is seen to the upper-left with the Real Casa’s mintmark, the crowned M is placed to the right of the larger galleon.

Each colour and Proof quality coin is encapsulated and presented in a custom case branded with the Real Casa de la Moneda logo and is accompanied by a certificate of authenticity. For additional information about this coin and other coins available from the FNMT — Real Casa, please visit their website.