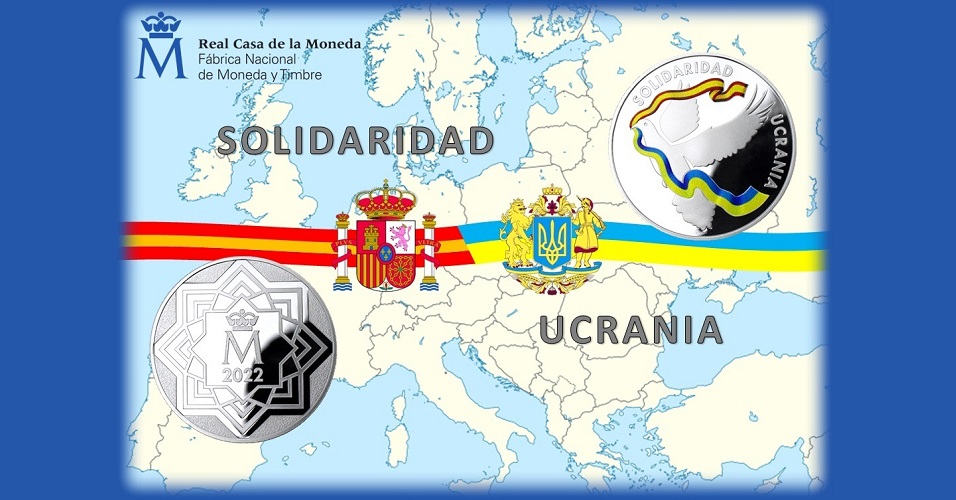 The Fabrica Nacional de Moneda y Timbre — Real Casa de la Moneda has released (6th June) solidarity medals which emphasise the support of the Spanish people to those of the government and people of Ukraine in the face of invasion from Russian armed forces and the subsequent war between the two countries. The unprovoked invasion of Ukraine commenced on the 21st February when Russia officially recognised two self-proclaimed separatist states in the Donbas region of Ukraine, and openly sent troops into the territories. Three days later, Russia proceeded further west and currently occupies 20 percent of Ukrainian territory, despite international condemnation.

Spain’s official position on the invasion of Ukraine has been outlined by the country’s Prime Minister Pedro Sánchez, who has expressed the “pain of the Spanish people” at the loss of human lives by the invasion of Ukraine. He further described the action as a “flagrant violation of international legality.” In his address to the plenary session in the Lower House of Parliament to report on this matter, the Prime Minister also stressed his commitment to Ukraine’s national sovereignty and territorial integrity and his admiration for the determination with which the Ukrainians are fighting for their freedom and independence. The invasion of Ukraine, Sánchez argued, is a “brutal attempt” by Russia’s president to halt the construction of the European political space, “founded on the defence of values radically opposed to the authoritarianism he represents,” such as freedom, peace, human rights, and solidarity. The Prime Minister of Spain has also affirmed in the Lower House of Parliament that the Russian aggression is an attack on the unity and values of Europe. He announced that Spain will deliver offensive military equipment to the Ukrainian resistance and that the government will adopt measures to protect the most vulnerable Ukrainian families from the impact of the war. In this effort, Spain has so far sent 20 tonnes of humanitarian aid and two air force planes with personal and defence equipment, as well as medical equipment. The prime minister reviewed the European Union’s response and sanctions against the Russian president, his government, and the oligarchy that supports him. Measures of sanctions include the ban on Russian airlines flying over the airspace of Spain and the entire EU, as well as a ban on broadcasts by the Russian regime’s propaganda media. He also announced that Spain will promote the declaration of Russia as a tax haven in the EU. Sanchez has declared:

These sanctions should remain in place until the Russian president ends the invasion and leaves Ukraine, all of Ukraine, and returns to their own internationally recognised borders of the Russian Federation.

The medal is produced by the Fabrica Nacional de Moneda y Timbre — Real Casa de la Moneda. The obverse depicts a dove of peace in flight carrying in its beak two ribbons in the colours of the flags of Spain and Ukraine as a symbol of unity and support of the peril presently affecting the latter country. On the reverse is a depiction of the mintmark of the Real Casa de la Moneda, a crowned M, and the year of issue 2022, which is placed below.

The price of each medal, which is individually enclosed in a sealed cellophane bag, is €10 plus the fee for postage.

The FNMT — Real Casa has advised the public that part of the proceeds from the sale of the medals will be delivered to the victims of the Ukrainian war through the efforts of the Spanish Red Cross.