The Casa Real de la Moneda have announced the issue of a new collector’s coin which highlights the 51st ISSF (International Shooting Sport Federation) World Championship – scheduled to take place from the 6th to the 20th September in the city of Granada, Spain.

The ISSF World Championships, which include competitions in the four disciplines of Rifle, Pistol, Running Target, and Shotgun, have been held every four years since 1954 in similar fashion to the Olympic Games. The 2014 championships will include nineteen events over a two week period with gold, silver and bronze medals awarded to competitors in presentation ceremonies.

The International Shooting Sport Federation World Shooting Championships originally began in 1897, after the successful 1896 Summer Olympics, and although the ISSF was not founded until 1907, these early competitions are still seen by the organization as the beginning of a continuous succession of championships. 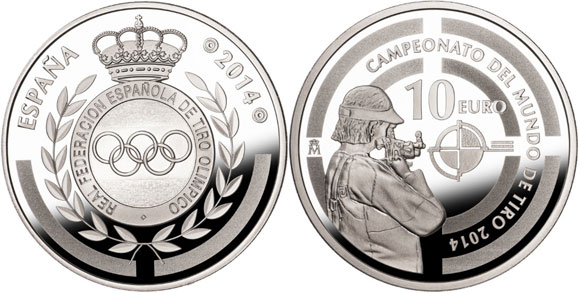 The reverse side of the coin includes a depiction of a competitor in action, aiming their rifle at a target. The surrounding design is styled as a target with an inscription of “CAMPEONATO DEL MUNDO DE TIRO 2014 along with the Casa Real’s own mintmark of a crowned “M” placed to the left of the target shooter and the denomination positioned to the right. The obverse includes in the center of the coin, the shield of the Royal Spanish Federation of Olympic Shooting is shown. In the upper left, in circular and in capital letters, “ESPANA” and in the upper right, the year of issue, 2014, between concentric circles representing a target.The designer of the coin is Esther González Pastor.

This is the first collector coin to be issued after the accession of Spain’s new King, Felipe VI in June – though his portrait is not included on the obverse. It is expected that the Casa Real will unveil a portrait of the new King to be used on both commemorative & circulation coinage later in the year.

For more information on this and other coins offered by the Casa Real de la Moneda, please visit their website at: http://www.fnmt.es/en/coleccionista/emisiones-2014 Information offered in Spanish & English – international orders dispatched.