The Spanish national team played their final match 23 days after the tournament began on the 1st July 2012 at the Olympic Stadium in Kiev, where Spain defended their title with a 4–0 win over Italy. With this historic win, Spain became the first team ever to win two consecutive European Championships, and the first international team to win three straight major tournament titles (Euro 2008, 2010 World Cup and Euro 2012) The national team made a triumphal return to the capital, Madrid where they were greeted by hundreds of thousands of well-wishers lining the streets and were accorded an audience by Their Majesties, King Juan Carlos and Queen Sophia. The coins, one gold (200 EURO) and one silver (10 EURO) capture the moment when the winning and final goal was scored hailing Spain as the 2012 victors of UEFA 2012. 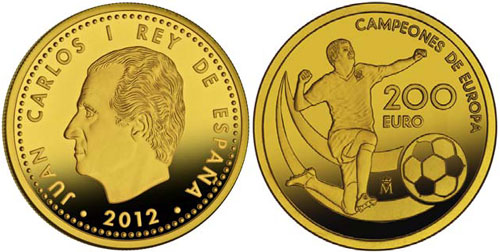 The reverse design includes two curves running from left to right of the coin represent the path of a ball pitched during a game. The foreground depicts a football player celebrating the scoring of a goal. The mintmark can be seen to his right, and further right is featured the football itself. Above this, inscribed on two lines of text, is the face value, while the wording “CAMPEONES DE EUROPA” in uppercase letters reads from the upper right of the coin in a descending curve.

The obverse depicts the effigy of His Majesty King Juan Carlos I. Inscribed in a circle surrounding his portrait is the text “JUAN CARLOS I REY DE ESPAÑA” displayed in upper-case letters. The lower part of the coin includes the mint year, 2012, marked by dots on either side. A beaded edge encircles both portrait and text. 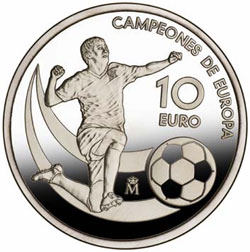 For more information on this and other coins offered by the Real Casa de la Moneda, please visit their website at: http://www.fnmt.es/index.php?cha=collector&scha=14&page=230