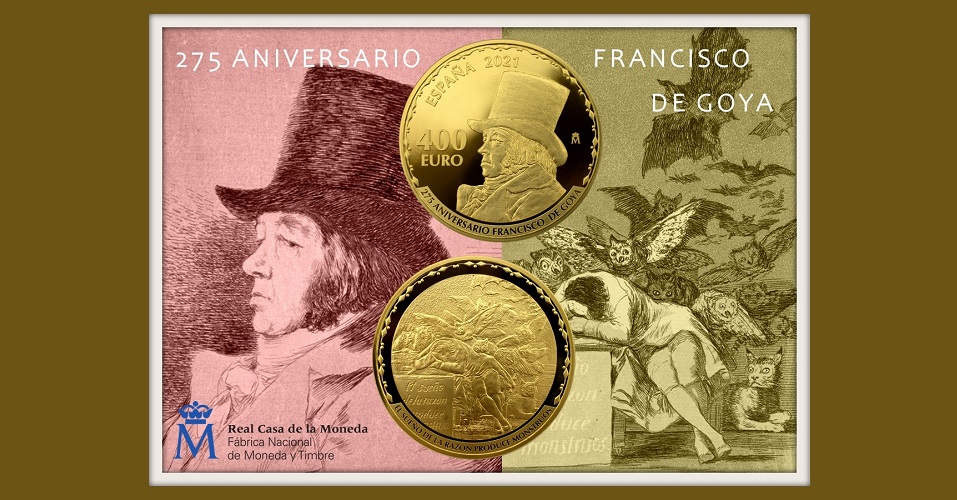 The Fabrica Nacional de Moneda y Timbre FNMT — Real Casa de la Moneda has launched a new collection of collector coins in honour of one of the most celebrated artists who is regarded as one of the most outstanding painters in history, especially in Spain: Francisco de Goya. As 2021 marks the 275th anniversary of the birth of de Goya, he and some of his works are remembered on collector quality gold and silver coins in celebration of this anniversary.

Goya’s rebellious character and sometimes violent actions branded him as undoubtedly a revolutionary artist. During his lifetime, he produced an enormous and varied quantity of paintings, drawings, and engravings relating to nearly every aspect of contemporary life, which acutely reflected the period of political and social upheavals in which he lived. Francisco de Goya is also regarded as the father of Modern art and the forerunner of Impressionism. The painter was born in 1746 in Fuendetodo, Zaragoza. He moved to Madrid and began to work at the Royal Tapestry Factory where he started to paint his first works, especially portraits. His style of painting evolved and touched on various styles from Rococo, through Neoclassicism to Pre-Romanticism. He was an artist whose works included portraits, nudes, and a dark period with paintings that really stood out for their depiction of death and war. Later around 1824, the painter moved to the French city of Bordeaux, where he lived until his death in 1828, and where he was buried in the Bordeaux cemetery of La Chartreuse. In 1869, his remains were returned to Spain, where he is now buried in the chapel of San Antonio de la Florida in Madrid, at the foot of the dome that the artist painted.

€50 — cinquentin: The obverse side depicts the artist in a self-portrait which was created circa 1797–1799. The etching was produced as part of the Caprichos series and illustrates Goya wearing the latest French fashions. The denomination 50 EURO is placed to the left of the portrait with the Real Casa’s mintmark; a crowned M is placed to the right. The commemorative inscription 275 ANIVERSARIO FRANCISCO DE GOYA is seen under the artist’s likeness. The reverse side cleverly depicts Goya’s work entitled The Grape Harvest or Autumn (1786), which highlights the work from within a recessed outline of the self-portrait shown on the obverse. Dressed in a yellow suit symbolising autumn, a young man sitting on a stone offers a cluster of black grapes to a lady. A boy is eager to reach the offered fruit, which is reserved for the adults. A woman stands next to them, holding a grape basket on her head, much like the classical allegory of the goddess Ceres with fruit on her head. To the left of the painting is the text ESPAÑA, and to the right is the year of issue 2021. The additional inscription of LA VENDIMIA is placed under the work. This is one of the most beautiful and best-known compositions from all of Goya´s cartoon series and is housed in the Prado Museum, Madrid.

€400 — eight escudos: The obverse side depicts the artist in a self-portrait, which was created circa 1797–1799. The etching was produced as part of the Caprichos series, a collection of works for the Spanish newspaper Diario de Madrid, in which the artist shared satirical commentary of the universal follies and foolishness in the Spanish society in which he lived and especially aimed at the nobility and the clergy. His own self-portrait was the 43rd out of a total of 80 aquatints. Goya shows himself wearing the latest French fashion that includes a top hat and is seen facing left. The denomination 400 EURO is placed to the left of the portrait with the Real Casa’s mintmark; a crowned M is placed to the right with the text ESPANA 2021 shown above. The commemorative inscription 275 ANIVERSARIO FRANCISCO DE GOYA is seen under the artist’s likeness. The reverse side intricately details Goya’s work entitled The Sleep of Reason Produces Monsters created circa 1796-1797. The original work is created as an aquatint — a process of an intaglio printmaking technique, a variant of etching, that produces areas of tone rather than lines. The commemorative inscription seen under the primary design reads EL SUEÑO DE LA RAZON PRODUCE MONSTRUOS. 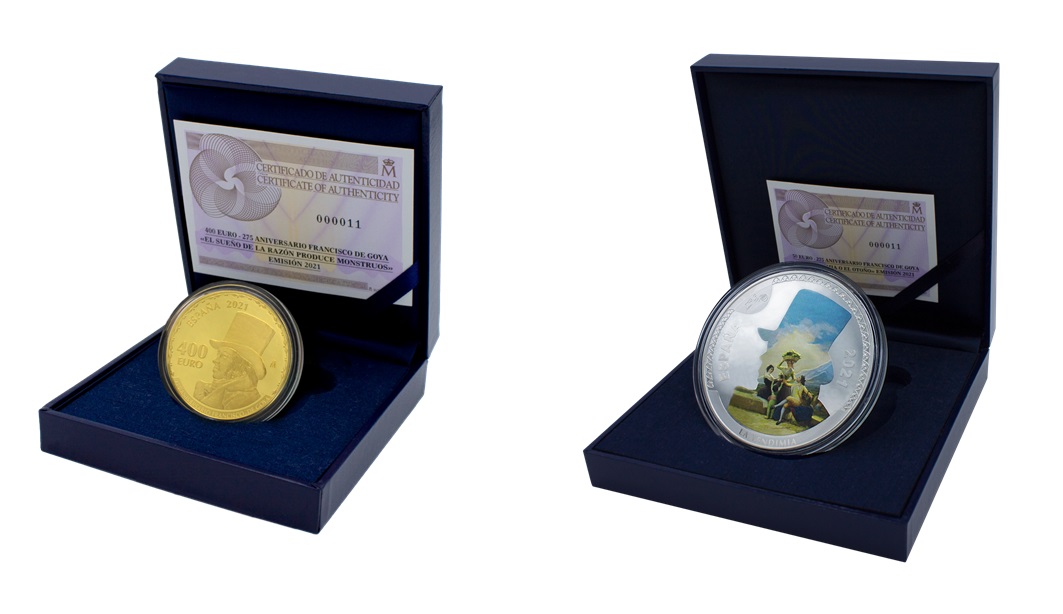