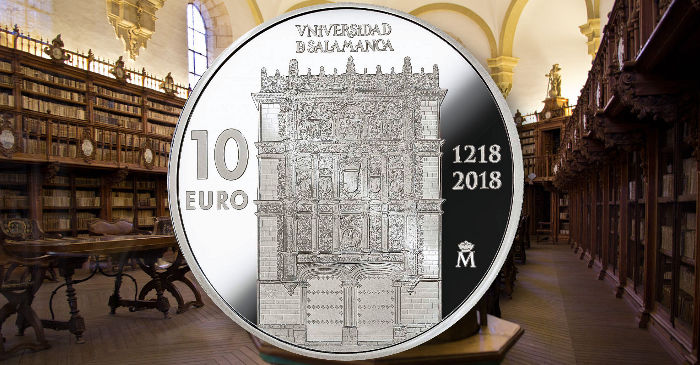 The Fabrica Nacional Moneda y Timbre—Real Casa de la Moneda has released (21st May) new silver crown coins which are in celebration of the 800th anniversary of the University of Salamanca, one of the world’s oldest continuous institutes of higher learning and the oldest university in the Spanish-speaking world. Founded in the year 1218 by royal warrant of HM King Alfonso IX de León (reigned 1188–1230), king of Leon and Galicia, he was considered a man ahead of his time. Not only is he remembered for the founding of this prestigious university, he also founded the first Cortes (parliament) in the kingdom that allowed the participation of various sectors of the population, in addition to nobles.

However, the origins of what has become the University of Salamanca were actually traced to an earlier time, when, in 1130, the institution started as a cathedral school connected to the Catholic Church.

On the 8th May 1254, a formal royal charter was granted to the institution by King Alfonso X, the successor of Alfonso IX, which created the University of Salamanca, set out its rules for organisation, in addition to setting up a financial endowment. Shortly thereafter, a papal bull by His Holiness Alexander IV in 1255 confirmed the royal charter of Alfonso X with the school also obtaining the title of university.

During the reigns of their Most Catholic Majesties, King Ferdinand II of Aragon and Queen Isabella I of Castile, it was at the University of Salamanca and their council of geographers that Italian explorer Christopher Columbus lobbied the king and queen for a contract to seek out a western route to the Indies, as well as pleading his case to the council. By the next century, the morality of colonisation, in what would later be referred to as the West Indies, was debated by the School of Salamanca, along with questions of economics, philosophy, and theology which would play an important part in the eventual evangelisation of the indigenous peoples of the Americas.

With the decline of Spain’s Golden Age of discoveries, recognised as between 1550 and 1715, the quality of academics in Spanish universities was also in decline and the frequency of the awarding of degrees dropped. The range of studies decreased significantly along with a sharp decline in the actual number of students and, as a result, the centuries-old European wide prestige of Salamanca declined.

It was also the University of Salamanca’s mathematicians who studied the calendar reform which was commissioned by Pope Gregory XIII, who reigned as pope from 1572 to 1585, and proposed the solution that was later implemented — thus giving way to the Gregorian calendar presently in use in the Western World.

During the latter part of the 15th century, the first female university students were notably admitted, including Beatriz Galindo (c. 1465–1534) who became the first woman ever to give classes at a university. Considered one of the most educated women of her time, she was a noted Spanish Latinist and educator as well as a writer, humanist, and a teacher of Queen Isabella of Castile and her children. By the year 1580, a total of 6,500 new students were arriving at Salamanca each year and amongst the graduates would be state officials of the Spanish monarchy who became part of its immense and complex administration.

Today, the University of Salamanca is recognised as an important centre for the study of humanities and is particularly noted for its language studies, in addition to law and economics. Scientific research is carried out in the university and research centres associated with it such as the eminent Centro de Investigación del Cáncer (Cancer Research Centre), the Instituto de Neurociencias de Castilla y León (Institute of Neuroscience of Castile and León), and the Centro de Láseres Pulsados Ultracortos Ultraintensos (Ultrashort Ultra-intense Pulse Lasers Centre).

The reverse of the coins depicts the very distinctive plateresque style façade of the University of Salamanca, which are the gates leading into the main courtyard. Begun in the year 1411, the facade would not be finished until 1533. The commemorative years 1218 and 2018 are placed to the right of the primary design and positioned as two lines with the coin’s face value of 10 EURO placed on the left side of the gates.

The effigy of HM King Felipe VI is seen on the obverse, which was introduced in 2014, the year of issue is seen just under the king’s portrait.

Each 10-euro coin. which is the modern version of the legacy eight-reales, is encapsulated and presented in a custom Real Casa de la Moneda/FNMT case and is accompanied by a numbered certificate of authenticity. For additional information on this coin and other coins available from the Real Casa, please visit their website.