On September 16, Spain’s Fabrica Nacional Moneda y Timbre / Real Casa de la Moneda announced plans the release of a new commemorative coin honoring the 300th anniversary of the birth of King Carlos III of Spain. Carlos III was considered by many historians to be a man of vision and enlightenment, and is remembered to this day for his legacy of progressive and reform-oriented policies. (Scroll down for more about Carlos III.)

The reverse depicts the monarch wearing the cloak of Grand Master of the Order of Charles III (Real y Distinguida Orden Española de Carlos III), which he established in 1771 as a reward for actions that benefited the nation and the Crown. He stands by the famous Puerta de Alcalá (Alcalá Gate) in Madrid.

The obverse depicts an effigy of HM King Felipe VI facing to the left and the year of issue, 2016, which is seen below the King’s effigy.

The coin, which came available September 26, is encased in a blue presentation box along with a certificate of authenticity and specifications. For more information on this and other coins offered by the FNMT / Real Casa de la Moneda, please visit their website. International orders dispatched where applicable. 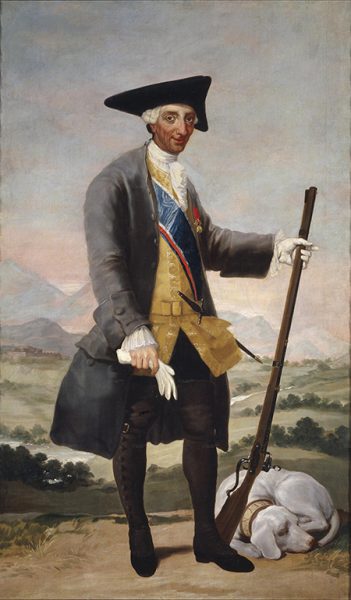 Born on the January 20, 1716, in the Spanish capital of Madrid, Carlos III was the fifth son of King Felipe V (1683–1746) of Spain and the eldest son with Felipe’s second wife, Elizabeth Farnese, daughter of the hereditary Prince of Parma. Upon the death of Felipe, the throne of Spain was passed to Carlos’s elder half-brother, who reigned as Ferdinand VI. The death of Ferdinand’s wife, Barbara of Braganza, in 1758 facilitated the King’s own death, as he followed her one year later, ostensibly of a broken heart. Carlos III was the king of Spain and the Spanish Indies from 1759 to 1788. He was also sovereign the kingdoms of Naples and of Sicily, reigning as Charles VII of Naples and Charles V of Sicily.

Carlos succeeded his brother in 1759 and proceeded to carry out a number of his brother’s reform-oriented policies. He also set out to introduce reforms to a number of elements of Spanish society and to the political and economic structure of the country, including Spain’s overseas possessions and colonies. Carlos III is remembered in the country’s capital for the many architectural and public-works programs he authorized and supported. He was actually nicknamed the “Best Mayor of Madrid” for the many public works that were undertaken in the city during his reign, many of which survive today.

As king of Spain, Carlos III tried to rescue his empire from decay through far-reaching reforms, such as reducing the influence and power of the Church and its monasteries, promoting science and university research, facilitating trade and commerce, modernizing agriculture, and avoiding wars. Unfortunately, his reforms proved short-lived, and Spain relapsed into noticeable decline internationally after his death. Even so, much of his legacy in Spain remains to this day. He was succeeded by his second son as Carlos IV, who intended to carry on the reforms of his father but—owing to a lack of interest in government affairs—was forced to abdicate in 1808 in favor of his eldest son. The latter reigned as Ferdinand VII for only two months before losing his throne to Joseph Bonaparte, the brother of Emperor Napoleon. Ferdinand VII was restored to the Spanish throne after the outcome of the Peninsular War of 1807–1814.