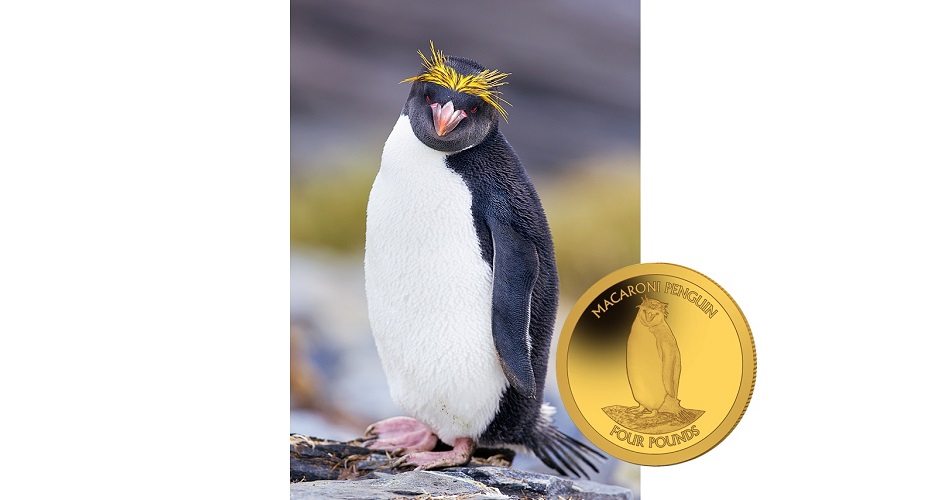 The Treasury of South Georgia and South Sandwich Islands have released new gold Proof coins which include a motif that will be seen on colour-produced 50-pence coins released later this year as part of a four-coin series featuring one of the region’s most well-known wildlife species: The penguin.

Named after an unusual hairstyle prevalent in the 18th century, which was referred to as “macaroni,” these penguins of the same name are one of the most distinctive breeds, as their markings include bright orange tufty plumes above their eyes. These orange feathers make this penguin stand out from the rest, as they are often striking against the penguins’ environment of grey rock and ice. The species is very prone to living in close-knit colonies and will form large colonies that will include hundreds of thousands of birds. Macaroni penguins are among the more vocal of the penguins, especially when establishing their territories. They can travel 250 miles (400 kilometres) to find a hunting site and are known to spend six months at sea while foraging for food and will easily dive as deep as 330 feet (100 metres) in pursuit of their food.

The design on the coin itself features a single adult macaroni penguin with those distinctive bushy plumes prominently shown above its eyes. The text MACARONI PENGUIN is placed above the design with the coins’ denomination of FOUR POUNDS placed below.

The obverse of the coin features an effigy of Her Majesty Queen Elizabeth II, which is an exclusive design of the Pobjoy Mint. The issuing authority is placed as a legend around the Queen’s likeness, which also includes the year of issue, 2020.

Each Proof-quality gold coin is encapsulated and presented in a red-Pobjoy Mint-branded case and is accompanied by a certificate of authenticity. For additional information about this coin and other coins issued by South Georgia and South Sandwich Island’s treasury, please visit the website of the Pobjoy Mint.

For information about the cupro-nickel 50-pence four-coin Penguin series, which will include the Chinstrap, Gentoo, Macaroni, and King, please click here.