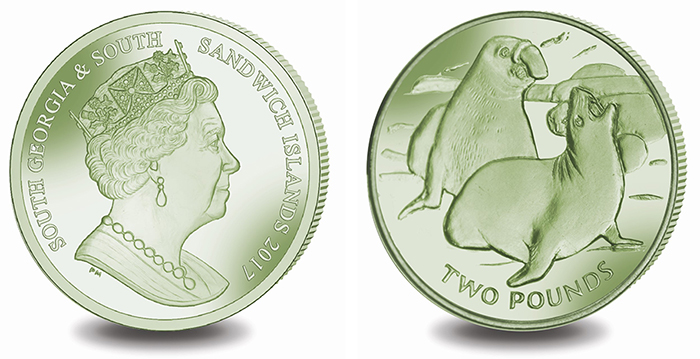 On December 6, the government and treasury of South Georgia and the South Sandwich Islands issued a new coin within their popular color-tinted titanium series. Their latest coin highlights wildlife prevalent in the South Atlantic, found on remote southern Atlantic Islands and close to the coast of Antarctica. The coin features the southern elephant seal, or to use its Latin name, Mirounga leonina. This is one of the two extant species of elephant seals; in addition to being the largest Antarctic seal, it is the largest pinniped (fin-footed animal) and the largest carnivore living today.

The elephant seal gets its name from its great size and from the large, inflatable proboscis of the adult males. This trunk-like appendage is used to make extraordinarily loud roaring noises, especially during the mating season. The males southern elephant seal has a greater body mass, in proportion to its female counterparts, than any other mammal. Surprisingly, they are able to propel themselves quickly on land, as fast as 8 kilometers (5 miles) per hour for short distances in order to return to water, catch up with a female, or, more importantly, to chase an intruder. Currently, the largest subpopulation of elephant seals lives in the South Atlantic, with more than 400,000 individuals, including about 113,000 breeding females on South Georgia. The other breeding colonies of the Atlantic subpopulation are located on the neighboring Falkland Islands and the Valdes Peninsula in Argentina, the latter colony being the only continental breeding population.

Elephant seals are among the seal species that can stay on land for the longest periods of time, as they can stay dry for several consecutive weeks each year. After their near extinction due to hunting in the 19th century, the total population has been able to increase over time, and in 2005 was estimated at 664,000 to 740,000 animals overall. However, as of 2002, two of the three major populations were declining and although the reasons for this are still unclear, it is thought to be related to the distribution and declining levels of the seals’ primary food sources. Today, most of their vital breeding sites are protected by international treaty, as UNESCO World Heritage Sites, or by national legislation. 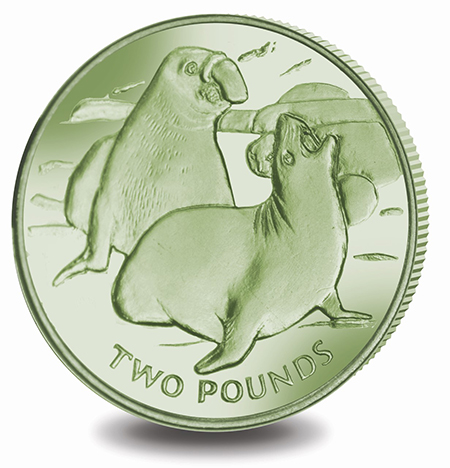 The 2017-dated coin is produced by the Pobjoy Mint, United Kingdom, on behalf of the South Georgia and South Sandwich Islands treasury. The reverse design shows a male and female elephant seal on a beach, which is, indeed, one of the most popular places for elephant seals in the South Georgia and South Sandwich Islands. The obverse of the coin features an effigy of Her Majesty Queen Elizabeth II that is an exclusive design by the Pobjoy Mint. 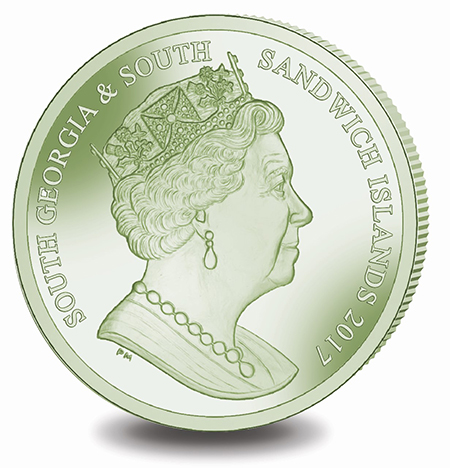 This new coin is issued in three different versions. The cupro-nickel Brilliant Uncirculated coin is shipped in a branded Pobjoy Mint blue presentation pouch. The Proof silver and Brilliant Uncirculated titanium coins are shipped encapsulated in an acrylic capsule for protection and housed in a custom red box with a certificate of authenticity. Due to the complexities of striking titanium coins and the fact that titanium reacts differently with every strike, each elephant-seal coin is technically different from the others. They also exhibit a lined effect that is unique to this metal. 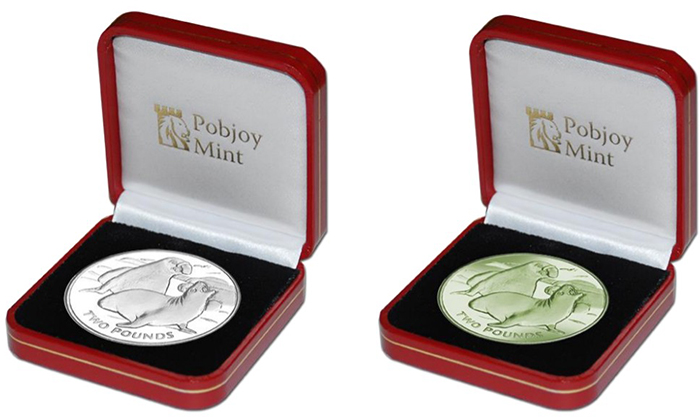 For more information on this and other coins issued by the Government & Treasury of South Georgia and the South Sandwich Islands, please visit the website of the Pobjoy Mint. International sales dispatched where applicable. ❑