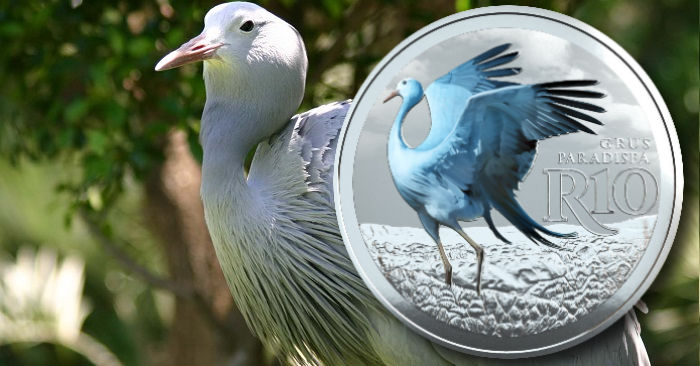 The South African Mint have launched their second set of colourised coins following closely on the successful 2016-dated series which highlighted the rich diversity of the flora and fauna of the country’s Kogelberg Biosphere, east of Cape Town. This 2017-dated range of colour coins celebrates the rich diversity and astounding beauty of the Cape West Coast Biosphere Reserve, situated in the coastal zone north of Cape Town. The reserve is known for its diverse ecosystems and habitats which include marine, beach and frontal dune environments, pans, wetlands, and rocky outcrops. This range is made up of four coins: Two R10 sterling silver coins depicting the fauna, and two R5 sterling-silver one-ounce coins depicting the flora of the Cape West Coast Biosphere Reserve. Designed by J.A. Geldenhuys, the set consists of four new depictions of some of the country’s most extraordinary plant and animal life. 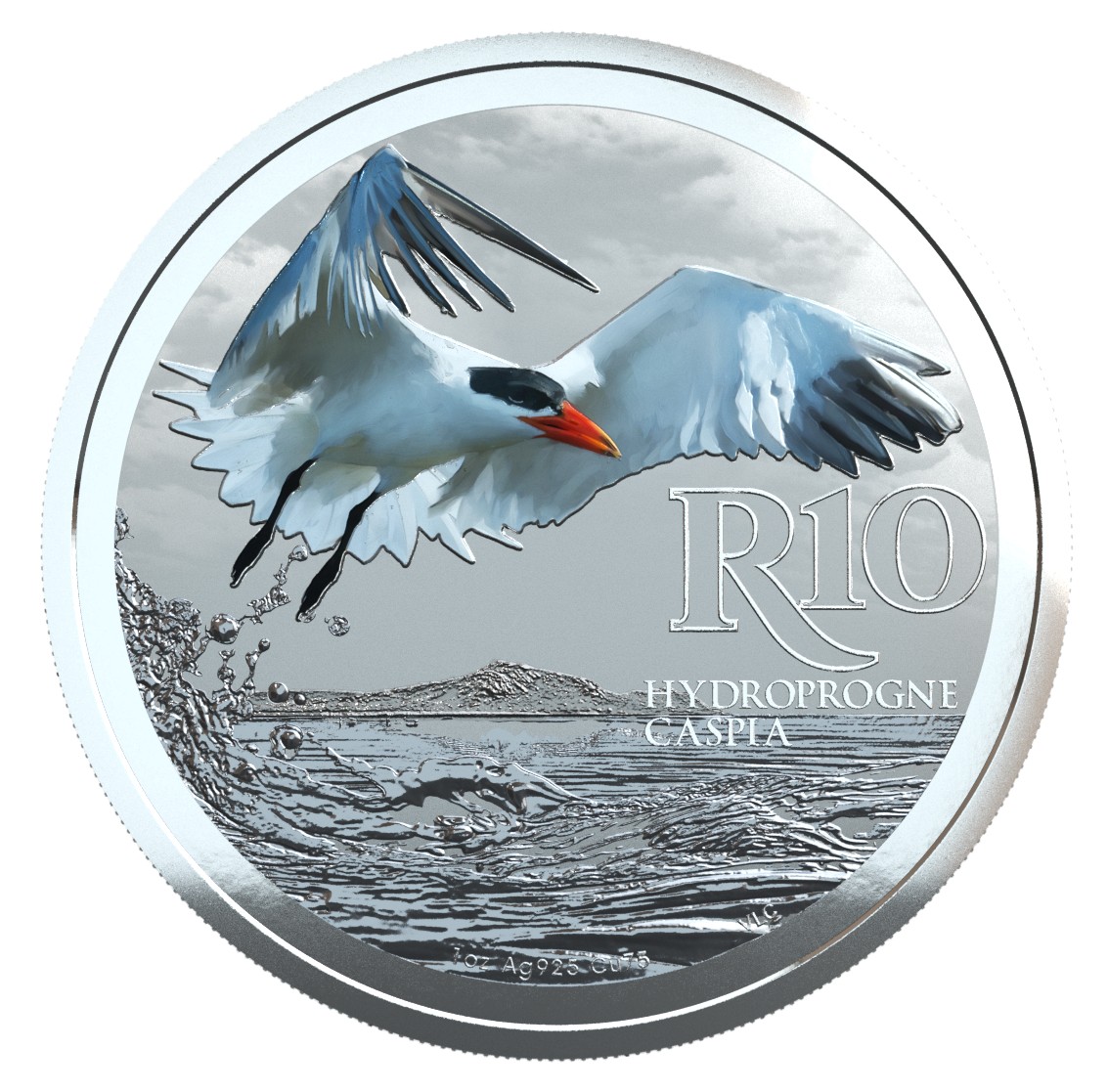 Coin 1: The Caspian tern, the largest of its kind, has a heavy coral-coloured bill that makes it easily identifiable and is a fitting inclusion in the 2017 colour coin range. The R10 coin portrays the bird flapping its wings on the reverse. Also depicted on the coin is its scientific name of Hydroprogne Caspia. The denomination R10 is boldly placed to the right and the metal value 1 oz Ag 925 Cu 75 and the initials VLC (VL Chipa) are placed below the primary design. 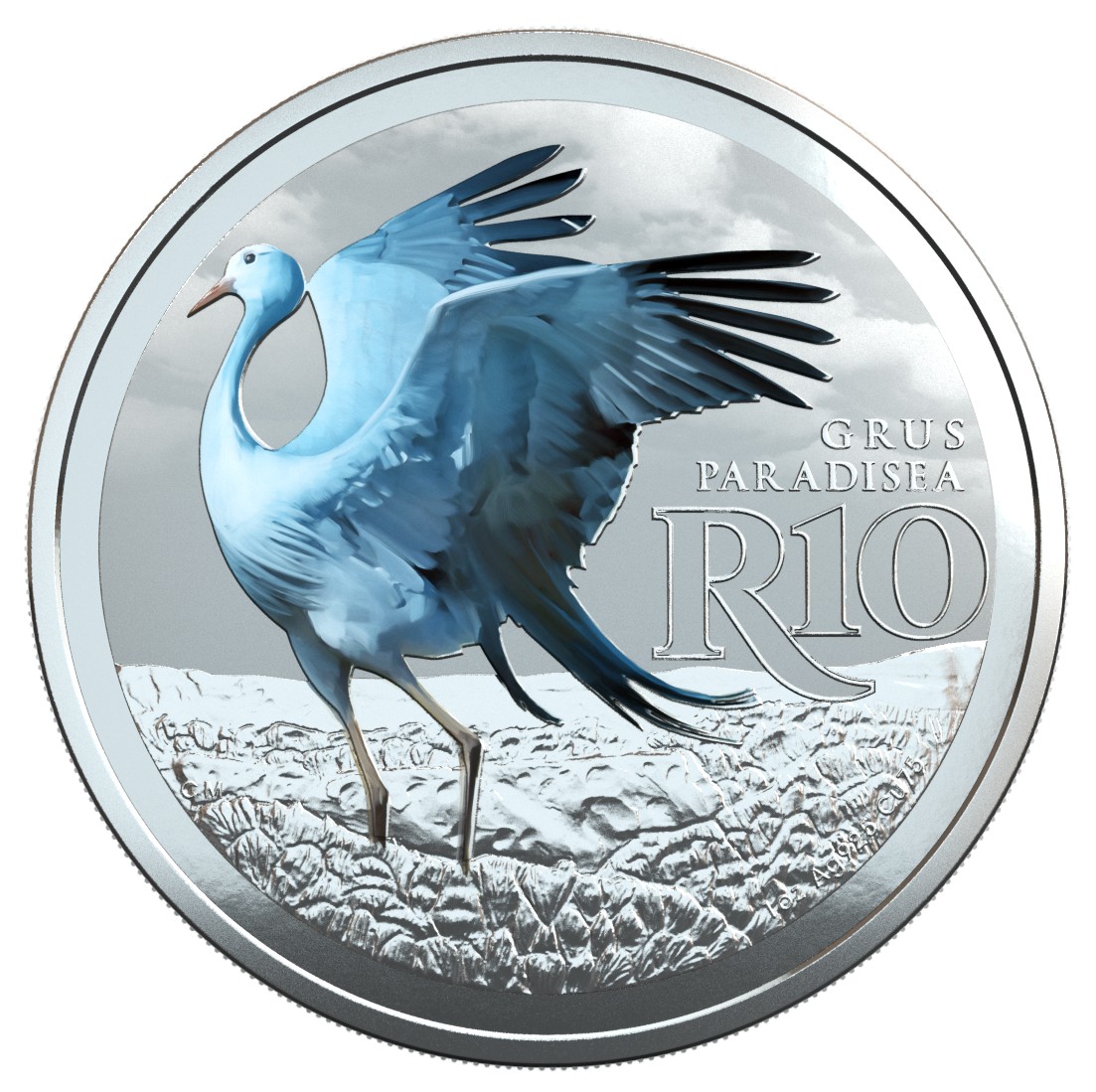 Coin 2: The blue crane is a truly dynamic bird. Its distinctive feathers stretch upward when it feels threatened or excited and its extended wing feathers, known as tertials, trail on the ground and are often mistaken for regal tail feathers. This coin features the near-endemic national bird of South Africa imposingly spreading its wings. On the reverse is also the bird’s scientific name Grus Paradisea, and the denomination R10, which are placed to the right. The initials CM (C Moses) along with the metal value 1 oz Ag 925 Cu 75, are placed below the primary design. 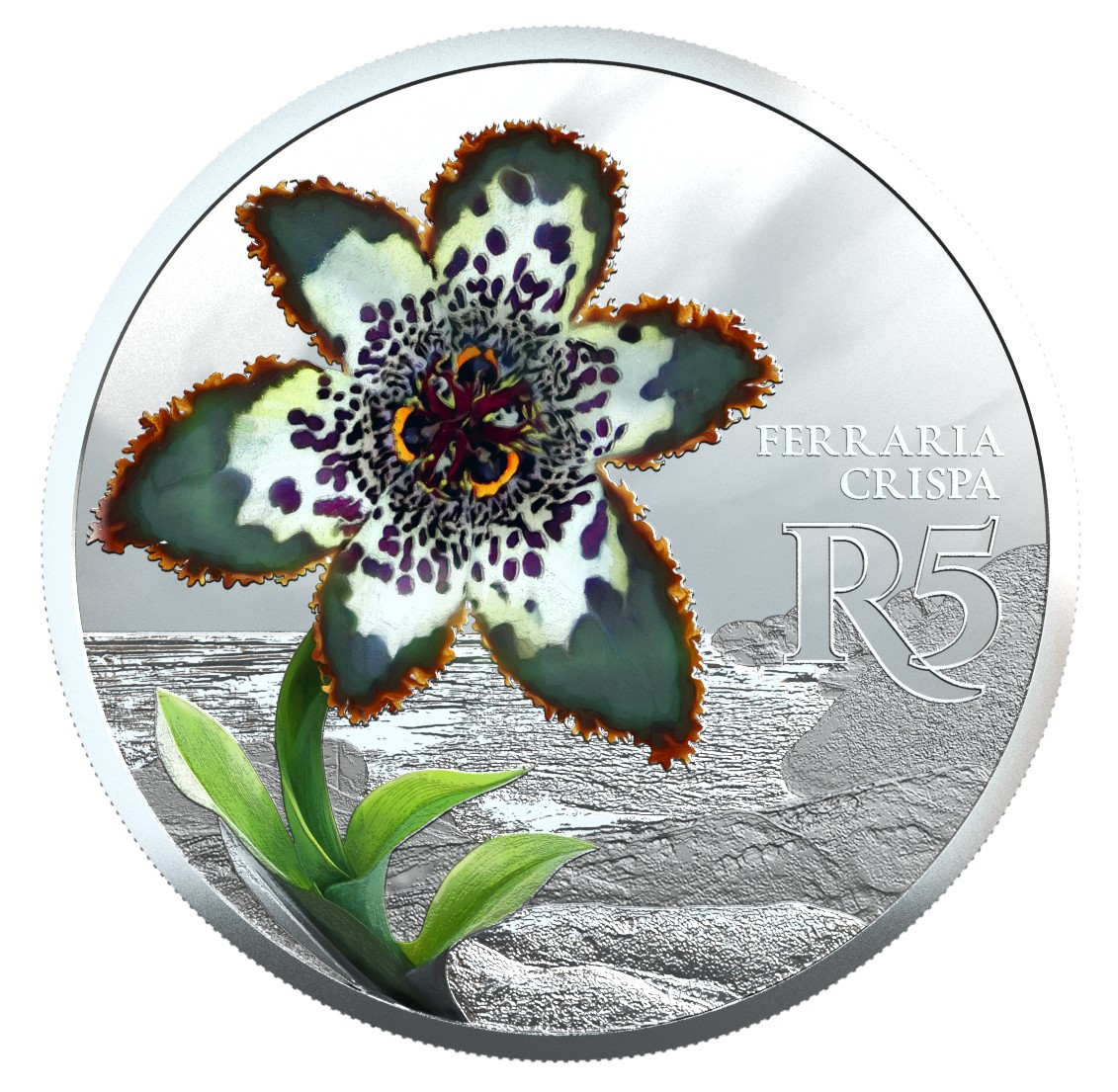 Coin 3: The mature starfish lily, an alien-looking flower with frilly edges, could easily be mistaken for an exotic sea creature. The fully opened creamy white flowers with brown ruffled edges and chocolate-brown to deep purple spots are highlighted with striking orange anthers. The plant has fleshy sword-like leaves and the flowers have a sweet aroma that is vaguely reminiscent of vanilla. The reverse of this coin features the flower of the Western Strandveld biome, its scientific name Ferraria Crispa and the denomination R5, is boldly placed to the right of the primary design with the metal value 1 oz Ag 925 Cu 75 and the initials VLC (VL Chipa) being placed below. 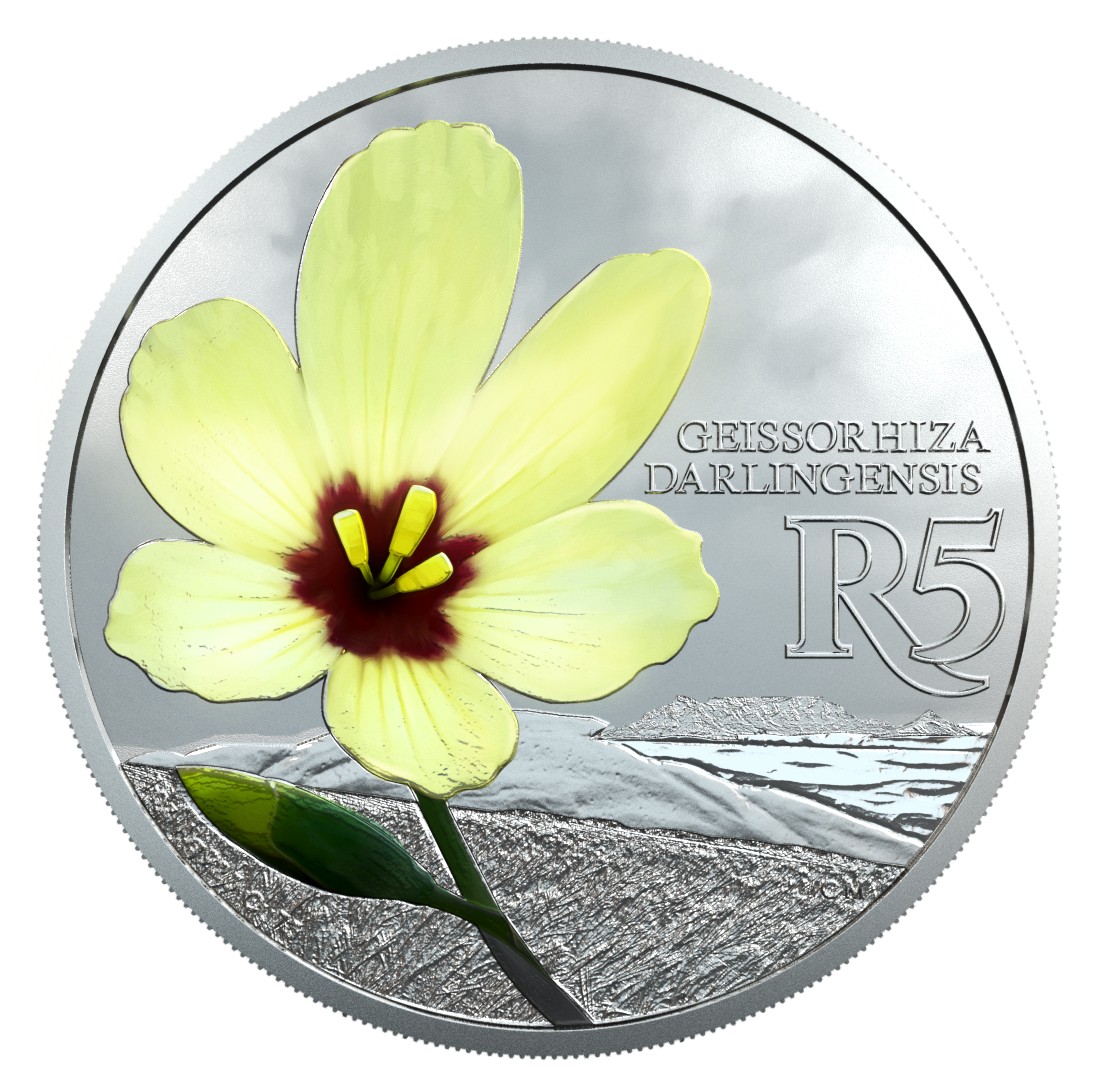 Coin 4: The yellow wine cup, which blooms in early spring, has deep creamy-yellow cups with dark red-brown centres. The flowers only open fully on hot, still days and are native to the seasonally wet flats of Darling in the Western Cape. This coin depicts the yellow wine cup against the background of the renosterveld of the Cape Floristic Region. Its scientific name Geissorhiza Darlingensis and the denomination of R5 are boldly placed to the right of the primary design. The initials CM (C Moses) along with the metal value 1 oz Ag 925 Cu 75 are placed below. 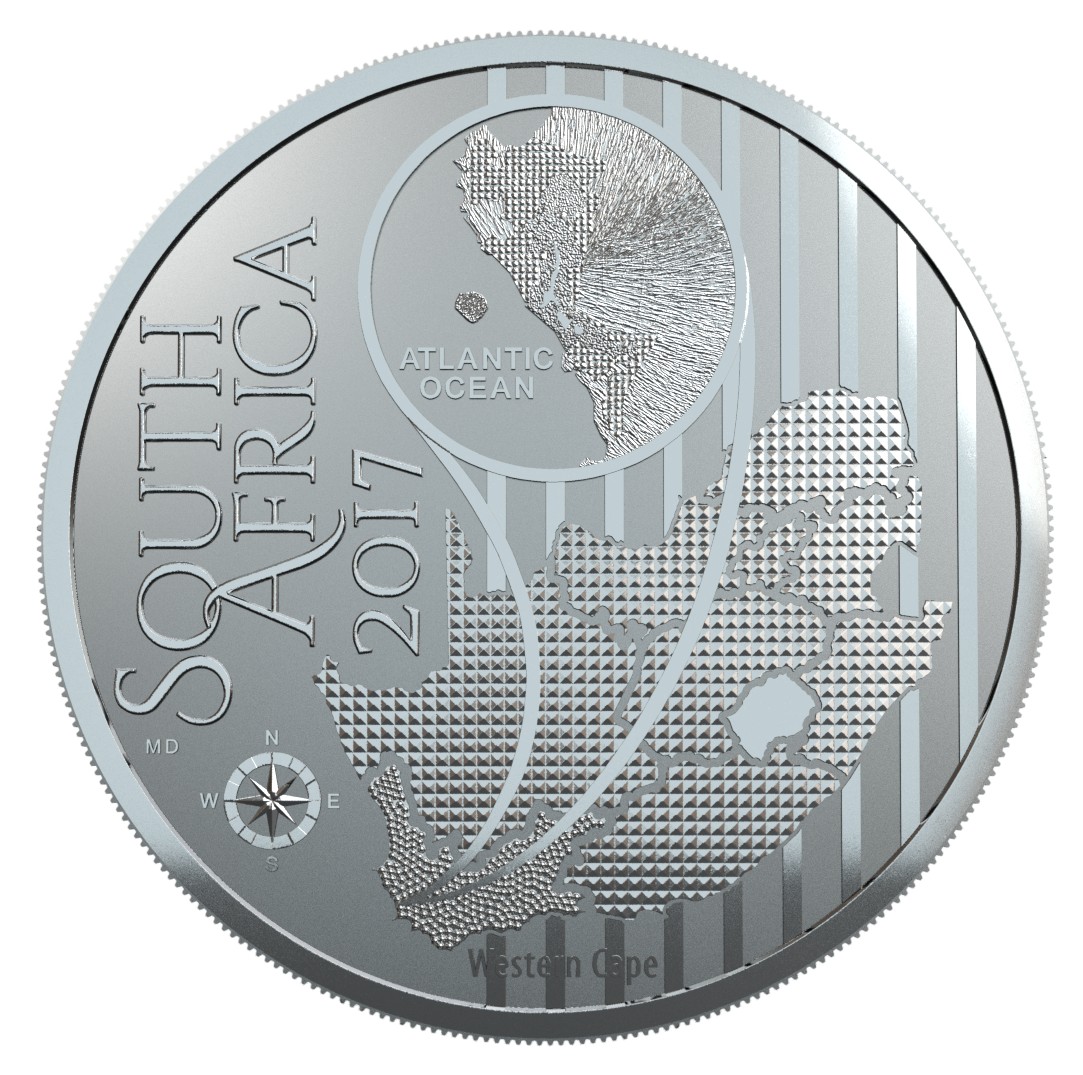 The common obverse for all coins in the series is designed by L. Guerra and features a map of South Africa indicating the location of the Cape West Coast Biosphere Reserve together with the words SOUTH AFRICA and the year 2017.

All four coins are also available for purchase individually and are presented in a custom case along with a certificate of authenticity. For more information on these and other coins offered by the South African Mint, please visit their website.