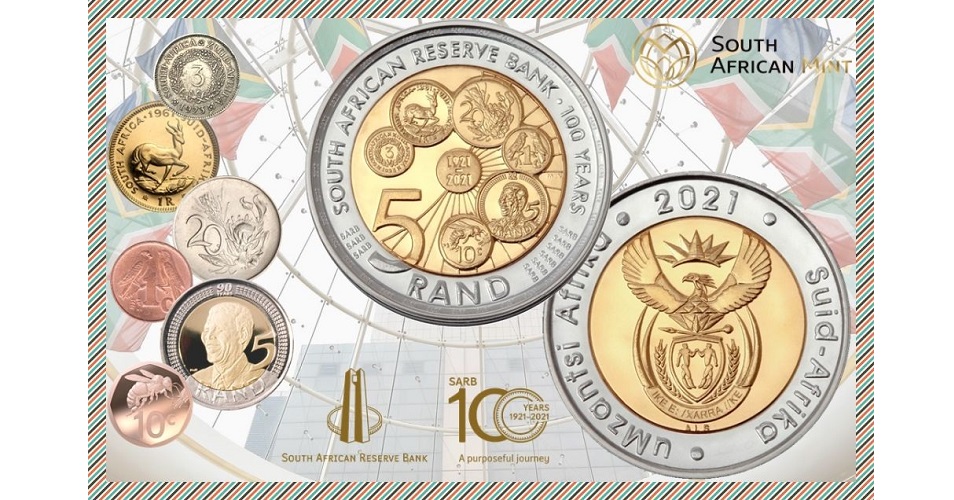 The South African Reserve Bank has released (30th June) new five-rand commemorative coins in celebration of the centenary anniversary of the founding of the country’s central bank. The South African Reserve Bank (SARB) was officially founded on the 30th June 1921 with the Currency and Banking Act 31 of 1920 which provided for the establishment of a central bank in South Africa. Its main functions were the issuance of banknotes and coins as well as managing the vast reserves of gold held by commercial banks. The South African Reserve bank is now the oldest central bank in Africa. In May 1961, when the Republic of South Africa was established, it was also the same year South Africa exited the Commonwealth and transitioned its legacy currency from pounds, shillings, and pence to a decimal system of 100 cents in one rand and two rand equalling one pound. The currency has since gone through significant technological and design changes and it is these design changes that capture the significant historical moments of South Africa.

Launched in 1989, the five-rand coin was part of the third series of decimal coins and which replaced the banknote of the same value. In 2004, a bi-metallic version of this denomination with improved security features replaced the nickel-plated steel coins. 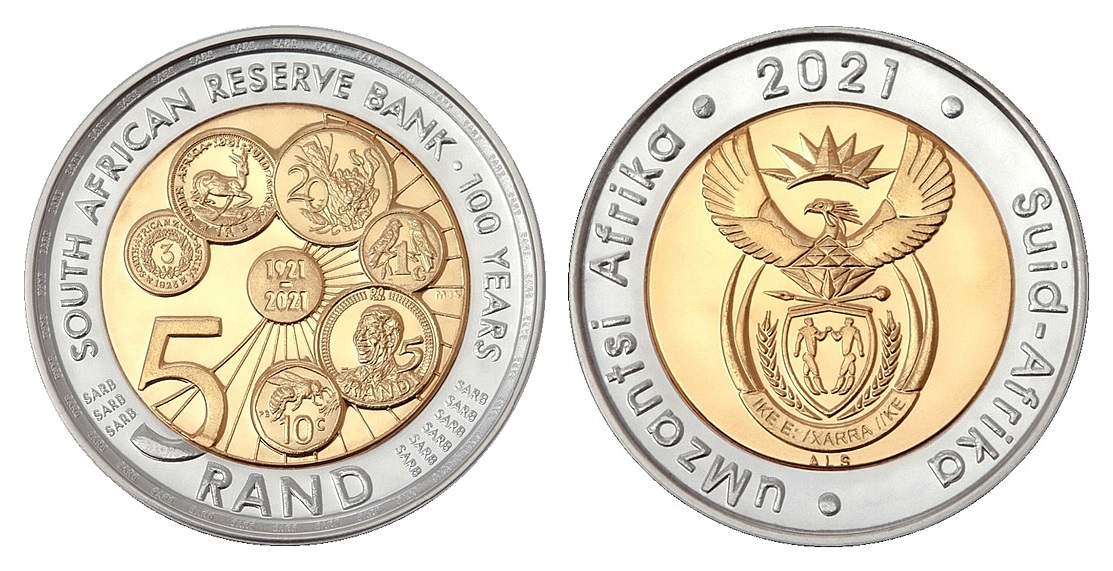 The coins are produced by the South African Mint at their facilities in Centurion, Pretoria, on behalf of the South African Reserve Bank. The design on the reverse of the R5 coin features five coins, depicting the history of the SARB and how South Africa’s currency mirrored the changing economic and political developments as follows:

1923: The three pence, or “tickey,” as they were colloquially called, represents the currency issued during the period of the Union of South Africa from 1910 to 1961 and before decimalisation. Prior to this time, the currency consisted of pounds, shillings, and pence. Under this system, there were 12 pence in a shilling and 20 shillings in a pound.

1961: A one-rand — R1 gold coin features the springbok. This coin represents the introduction of the rand as the official currency issued after South Africa became a Republic on 31 May 1961. The R1 coin formed part of the first decimal coin series. The springbok has featured on numerous coins and is especially recognised as the reverse design on the world-famous Krugerrand. The springbok is South Africa’s national animal.

1965: These cupro-nickel 20-ccent coins were issued as part of the second decimal series depicts the king protea, South Africa’s national flower. These coins were replaced in 1989 with the introduction of the third decimal series in 1989.

1990: The one-cent coin featuring two sparrows represents the third decimal coin series. The design of two sparrows first featured on the quarter penny, or farthing, originally issued in 1923 and continued to be depicted on the smallest coin denomination within each South African coin range until 2002.

2008: The five-rand coin depicts former President Nelson Mandela on the occasion of his 90th birthday. President Mandela was the first president elected when majority rule was introduced in 1992.

Upcoming: A 10-cent coin, which is scheduled for introduction as part of the soon-to-be-released fourth decimal series, depicts the Cape honey bee and represents the future of the currency and the SARB.

The overall design includes the text SOUTH AFRICAN RESERVE BANK — 100 YEARS placed over the primary design. The denomination of 5 RAND is placed underneath. The reverse side includes a depiction of the South African crest introduced in 2000. The text uMzantsi Afrika 2021 Suid-Afrika is placed along the two sides of the crest in Xhosa and in Afrikaans, two of the nine official languages in South Africa.

A sterling silver collector’s coin with a gold-plated centre struck with the same design as the base metal commemorative circulation-type R5 coin will also be made available at a later date. For more information about the coins and banknotes issued by the Reserve Bank of South Africa, please visit their website.