The Kremnica Mint have provided to CoinUpdate.com this image of their soon-to-be-released €100 gold coin. 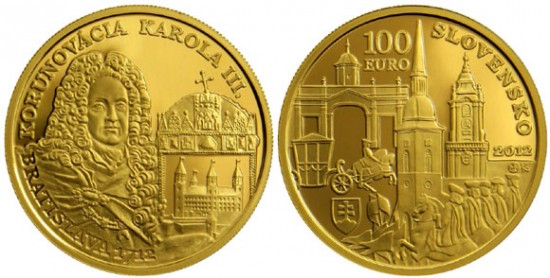 Their latest 100 EURO gold coin is part of the “Coronation” series. The first of the “2012” coins were just produced for promotional purposes and we have been given a sneak preview of the coin which will be launched in December. The Kremnica Mint have also confirmed that the mintage of the 2012 “Coronation” gold coin will be lower than the 2011 dated gold coin.

The coin features a portrait of the Holy Roman Emperor Karol III who’s coronation was held in Bratislava, (then known as Pressburg- Preßburg in German, Pozsony in Hungarian) Karol III’s coronation took place on the 22nd May 1712 and thus, the coin marks the 300th year of this occasion. Karol III was the last of the Habsburg rulers in the male line of the Austrian Empire and the father of one of the most notable and longest reigning Habsburg rulers – the Empress Maria Theresa.

We will have further information about the issue of the coin as it is announced by the Kremnica Mint.