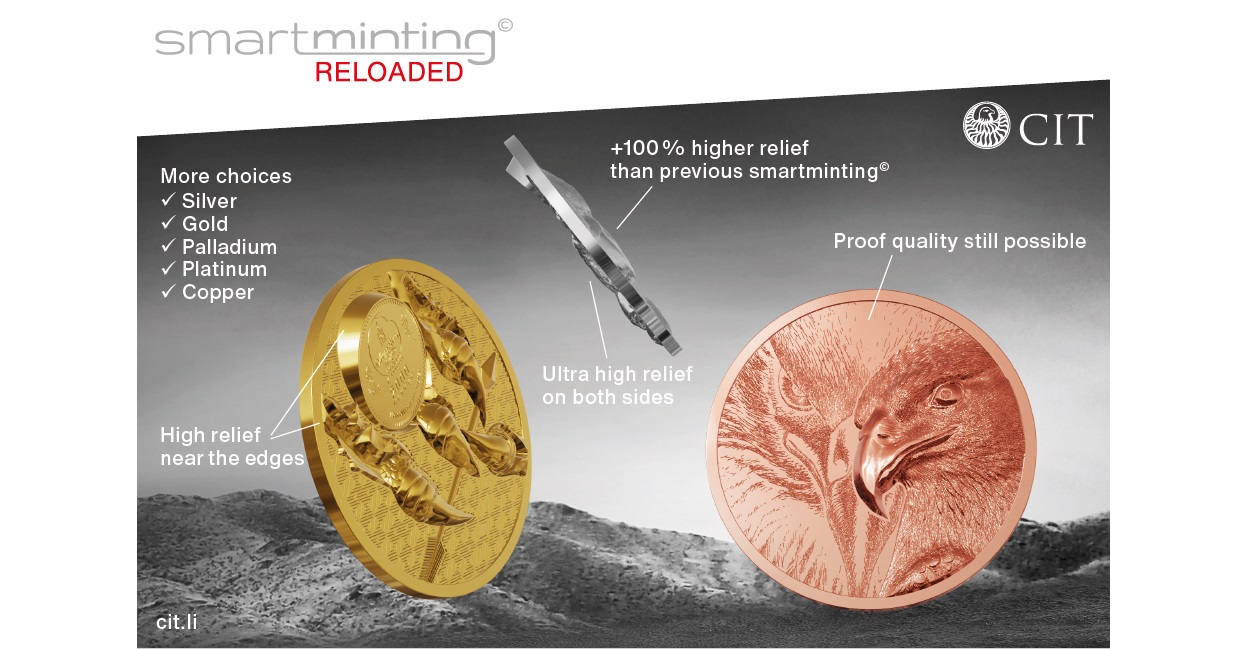 At the World Money Fair 2020, CIT Coin Invest presented the first product of a new generation of smartminting coins: Now, coins can be produced with even higher relief on both sides, in a variety of metals, and featuring new designs never achieved before.

The appearance of a coin depends not only on the ability of the designer but also on the technical possibilities available to them. For example, the relief on circulation coins, which are minted in large quantities in high-speed presses, measures just tenths of millimeters. Commemorative coins produced in low mintages can be minted with much greater care. But even then, only limited relief was possible — until CIT Coin Invest developed in cooperation with B. H. Mayer in Munich smartminting.

Now, smartminting technology has been taken even further. The new technology broadens the scope for design more than ever before in traditional coin production:

At the World Money Fair, CIT Coin Invest presented the Majestic Eagle, the first product of the new smartminting generation, minted in gold, silver, and copper. On the reverse, which depicts the eagle’s impressive talons, it is especially evident that the designer was able to position the highest points of relief wherever they wanted. Both the obverse and reverse show impressive relief, without the highest points of the design on each side, has to be coordinated. Not only the field but also the beak and claws, exhibit the flawless finish that characterizes the quality Proof.

Although the Majestic Eagle is “only” being minted in gold, silver, and copper at the moment, it is also possible to produce it in palladium and platinum.

The new smartminting technology means more beautiful coins for all collectors because the variety of materials makes it possible — for the first time — to produce high-relief coins of perfect minting quality in more affordable materials.

It also means that investors no longer have to choose between valuable metal and aesthetically appealing design. Instead, investment products can be made in platinum, palladium, and, of course, the classic gold, with innovative smartminting designs.

CIT Coin Invest is proud to be working in collaboration with B. H. Mayer to produce coins in a quality never before possible in the history of coinage.

You can find more information on smartminting on the CIT Coin Invest website.