The National Bank of Slovakia have issued a new gold collector coin which highlights the reign and subsequent coronation of Prince Rastislav of Great Moravia. Considered as one of the most historically eminent figures of Great Moravia (part of present-day Czech Republic) was its ruler, Rastislav (ruled 846-870). During his reign, Great Moravia advanced and developed from a tribal principality subordinated to the Frankish and later Eastern Frankish Empire into a legitimate and sovereign state in Central Europe. Rastislav achieved independence for his country through success in wars with the Eastern Frankish Empire, alliance with other Slavonic tribes and diplomatic relations and cooperation mainly with the Roman Curia. Another factor contributing to the sovereignty of Great Moravia was the mission of the brothers Constantine and Methodius to the country in 863. A plan of Rastislav was to create a separate Slavonic religious province. Supported by the ruler, Constantine and Methodius were able to develop wide-ranging evangelical, educational and diplomatic activities that significantly influenced the cultural, spiritual, religious, and political development of Great Moravia. The brothers – later Saints Cyril (Constantine) and Methodius are also credited with the creation of a script for the Slavs – or Cyrillic.

Rastislav was dethroned by his nephew Svatopluk I (reigned 870-894) who handed him over to the Franks. His fate was not befitting a leader who had achieved as much for his realm as he had, for he was dispatched under guard to Regensburg, Bavaria and brought to King Louis in chains. While the assembled Franks, Bavarians, and Slavs condemned Rastislav to death for treason, the king commuted his punishment to blinding and imprisonment. Rastislav died in prison but was canonized in 1994 by the Czech and Slovak Orthodox Church in Prešov. 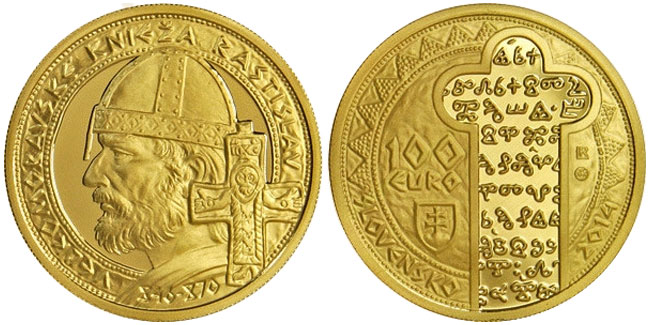 The coin, produced by the Kremnica Mint is designed by Roman Lugár of the Kremnica Mint. The obverse side depicts the ground plan of a Great Moravian church in Devín, and within this plan are various letters of the Glagolitic alphabet, the first Slavonic alphabet. Along the edge of the design are decorative elements composed of beads. To the lower left is the coat of arms of the Slovak Republic, and above that is denomination “100 EURO” in two lines. Inscribed along the lower edge is the name of the issuing country, “SLOVENSKO”, and the year “2014”. To the right of the ground plan are the stylized initials “RL” for the name of the designer and the mint mark of the Kremnica Mint.

The reverse side includes an imagined portrait of Rastislav juxtaposed with a cross from the Great Moravian period (found at an archaeological excavation in Mikulčice). Around most of the edge are two lines of beading and between them the inscription “VEĽKOMORAVSKÉ KNIEŽA RASTISLAV”. The years of Rastislav’s reign, “846-870”, appear along the lower edge.

The coin is available directly from the Kremnica Mint by visiting their website at: http://www.mint.sk/nakup_mince.php?code=522005 Information offered in Czech/Slovak, German and English – international orders dispatched.