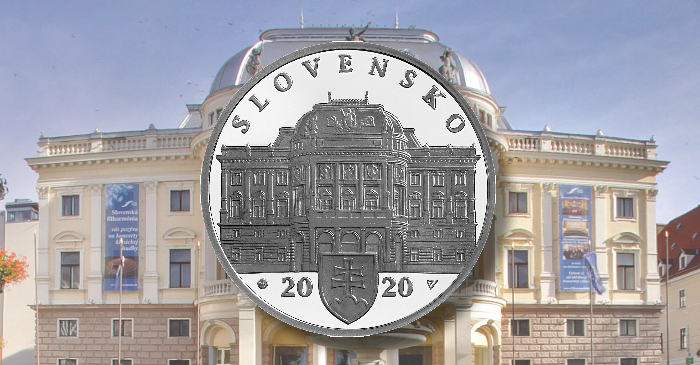 The National Bank of Slovakia has issued new silver Proof collector coins which are in celebration of the centenary anniversary of the country’s first performance theatre. Established in 1920, the Slovak National Theatre (SND) played an essential role in supporting the objectives of the-then Czechoslovak Republic, formed in 1918. Today, the SND’s companies perform at the theatre’s new building and also at its original venue, a building in central Bratislava built in 1886 featuring a design of Neo-Classical style by the renowned Viennese architectural studio Fellner & Helmer. Initially, the building was known as the City Theatre, and is now known as the SND Historical Building, or landmark.

The coins are produced by the world-renowned Kremnica Mint at their facilities, on behalf of the National Bank of Slovakia, and designed by Peter Valach. The obverse side depicts the beautiful and ornate historical building of the National Theatre. At the bottom centre is the Slovak coat of arms, in which the year of issuance, 2020, is shown in two digits on both sides of the crest. The text, SLOVENSKO, is inscribed along the upper edge of the design. To the left of the year is the mintmark of the Kremnica Mint (Mincovňa Kremnica), consisting of the letters “MK” placed between two dies. To the right of the year are the stylised letters PV, referring to the designer.

The reverse side features the Slovak National Theatre’s logo enclosed within a square frame. A pair of masks representing comedy and tragedy appears below the logo at the bottom of the design. Above the logo is the coin’s denomination, 10 EURO, placed one above the other. The year 1920 is shown with the first two digits to the left of the logo and the last two digits to the right. The inscription appearing along almost the entire edge of the design, except at the very bottom, is SLOVENSKÉ NÁRODNÉ DIVADLO (“Slovak National Theatre”) and “100. VÝ- ROČIE ZALOŽENIA (“100th anniversary of establishment”), with the two parts separated by a prominent dot.

Each coin is encapsulated and presented in a custom case branded with the Kremnica Mint’s insignia and is accompanied by a certificate of authenticity. For additional information about these coins and others issued by the National Bank of Slovakia, please visit the website of the Kremnica Mint.