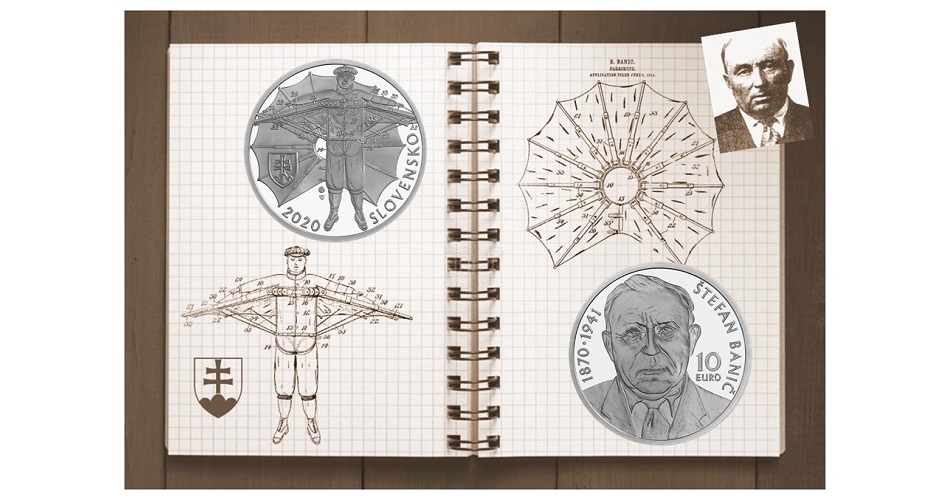 The National Bank of Slovakia has issued new silver collector coins which are in honour of one of the country’s more memorable inventors of the 20th century. The coins are issued in remembrance of the 150th birthday of Štefan Banič, the Slovak inventor of an early parachute design, who was born on the 23rd November 1870 in the village of Neštich, in present-day Smolenická Nová Ves. Having trained as a bricklayer, Banič had hoped to improve his life, and so in 1907 at the age of 37, he did what many of his compatriots were doing and decided to emigrate to the United States. When he arrived in America, he settled in Greenville, Pennsylvania, and began work first as a miner, then at a quarry, and then at an engineering works, where he began to show some of his innovative talents.

The early 20th century saw the emergence of powered air flight and stories all around the world were full of newspaper articles chronicling the successes of trial flights. It was at this time in 1912 that Banič personally witnessed a fatal plane crash, which was not a rare occurrence at a time when aviation technology was still in its infancy. Shaken by the experience, Banič began to explore ways of helping pilots escape from the aircraft unhurt and safely. With the help of friends, Banič came up with a novel umbrella-like parachute design attached to the body. The parachute opened using a multi-spring system and solved the problem of so-called “swimming,” or moving without control in the air. The parachute was attached to the wearer’s body with breast straps and once fastened into the parachute, the difference between today’s design and the earlier model designed by Banic was there were no cords which the wearer could hang from. Before he could get his design patented, Banič had to show that his prototype worked, and, on the 3rd June 1914, in front of representatives of the United States Patent Office in Washington D.C., Banič demonstrated his own invention by jumping from the roof of a building.

Now, depending on the historical source, the building Banic jumped off of was between 15 and 41 stories tall, but he further demonstrated the parachute by making a 600-foot jump from an aeroplane. On the 25th August 1914, and in light of these jumps, the Patent Office granted Banič his patent, which gave him the right to produce, use, and sell his parachute in the United States. The main advantages of this parachute were its lightweight and deployment speed which brought Banič to the attention of the public, press, and aviation experts — as well as the United States Army, which bought the patent. Unfortunately, they never put his parachute design into service, but they did make Banič an honorary member of the U.S. Army. However, a few weeks after the outbreak of the First World War, it is claimed that Banič’s parachute was used in the First World War by pilots of the LaFayette Escadrille, a French-commanded unit composed mainly of American volunteer pilots, though this fact was never credibly verified. This lack of commercial development of the first practical parachute did not, however, take anything away from Banič’s initial pioneering technical achievement. After 14 years in the United States, and despite his success as an innovator, Banič decided to return to his home village of Smolenická Nová Ves, in what was then the newly created independent nation of Czechoslovakia. Upon his return back home, Banic took up employment as a quarry blasting engineer and did not continue his inventing career. Instead, he devoted himself to fruit growing and to surveying local karst, which is the topography formed from the dissolution of soluble rocks such as limestone, dolomite, and gypsum. It was during this activity that he co-discovered Driny Cave, a limestone cave in West Slovakia in the Little Carpathians Mountains in 1929.

Štefan Banič died on the 2nd January 1941 in the town of Smolenice, Slovakia, where he was buried.

The collector coins are produced by the Kremnica Mint at their facilities in the town by the same name and are designed by Peter Valach. The obverse side shows a front-facing portrait of Štefan Banič, which is based on an actual photograph attributed to an identity photo of Banic taken upon his return to Slovakia. To the right of Banic’s image is the coin’s denomination of 10 EURO. His name, ŠTEFAN BANIČ, appears along the right edge of the design, while along the opposite edge are the years of the inventor’s birth and death, 1870 and 1941, separated by a dot.

On the coin’s reverse is a nicely detailed depiction of Banič’s parachute based on the design that appears on the respective patent document. At the left of the design is the Slovak coat of arms. The year of issuance, 2020, appears at the lower-left edge, and the name of the issuing country, SLOVENSKO, is placed along the lower-right edge. Below the parachute design is the mintmark of the Kremnica Mint consisting of the letters MK placed between two dies, as well as the stylised letters PV referring to the coin’s designer Peter Valach. The smooth edge of the coins includes incused lettering which reads • • • ŠTEFAN BANIČ – VYNÁLEZCA PADÁKA (“• • • Štefan Banič – Inventor of the Parachute”).

Each Brilliant Uncirculated and Proof quality coin is encapsulated and presented in a custom case branded with the Kremnica Mint’s insignia and is accompanied by a certificate of authenticity. For additional information about these coins and others issued by the National Bank of Slovakia, please visit the website of the Kremnica Mint.