The National Bank of Slovakia have issued a new commemorative 2 Euro coin which marks a very important moment in the country’s history – that of its accession into the European Union on the 1st May 2004.

Slovakia, along with eight Central and Eastern European countries including the Czech Republic, Estonia, Hungary, Latvia, Lithuania, Poland and Slovenia – all former communist countries as well as three countries who re-established independence from the former USSR, took part in accession ceremonies held at the official residence of the President of Ireland. Along with two countries in the Mediterranean – Cyprus and Malta, this was the largest single enlargement within the European Union in terms of people and number of countries. Slovakia completed their further integration into the European Union with the adoption of both the Schengen agreement – the abolition of border checks at the signatories’ common borders and on the 1st January 2009, adopted the Euro single currency, becoming the only country to do so that year and 16th member state to do so overall. 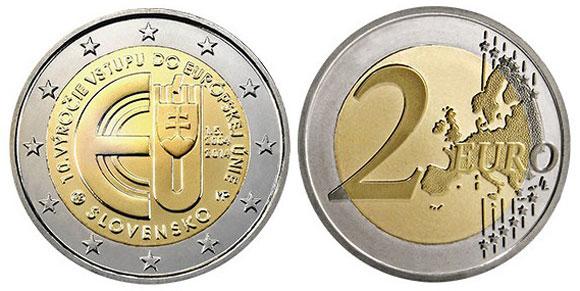 The coin is struck by the Kremnica Mint and designed by artist Maria Poldaufová. The obverse design includes the stylised letters “EÚ” as the abbreviation of the European Union, with the coat of arms of the Slovak Republic incorporated in the foreground. On the right-hand side of the inner part of the coin, in two lines, is the date of the Slovak Republic’s accession to the European Union, “1.5.2004” and immediately below it the year “2014”. Inscribed along the bottom edge of the inner part is the name of the issuing country, “SLOVENSKO” while in a semi-circle along the upper edge is the inscription “10. VÝROČIE VSTUPU DO EURÓPSKEJ ÚNIE”. To the lower left is the mint mark of Kremnica Mint (composed of the letters “MK” between two dies), and to the lower right are the stylized letters “MP”, the initials of the designer. The coin’s outer ring bears the 12 stars of the European Union. 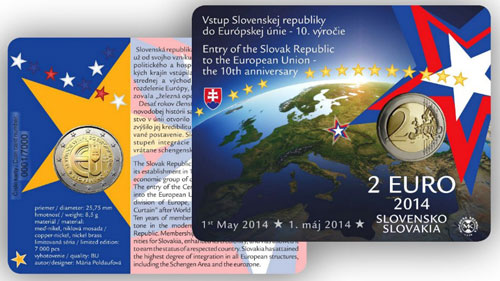 A collector’s version of the coin is available in an individually numbered “coin-card” and the commemorative 2 Euro coin will also be included in the Slovak Mint set for 2014. For more information on this and other coins issued by the National Bank, please visit the website of the Kremnica Mint at: http://www.mint.sk/nakup_novinky.php Information in Slovak, English and German – international orders dispatched.