The National Bank of Slovakia has issued (18th June) a new coin which marks the 250th anniversary of birth of Chatam Sofer (1762 – 1839) one of Europe’s most noted scholars of the Talmud and founder of the Bratislava Yeshiva which continued as a primary institute of Hebrew education until the outbreak of World War II. Born in Frankfurt, Sofer traveled to Boskovice, Moravia (now part of the Czech Republic) as a scholar in 1782 where he became recognized as an authority in the teachings of the Talmud. The Yeshiva he founded in Bratislava in 1806 eventually became the most influential institute of Hebrew studies. 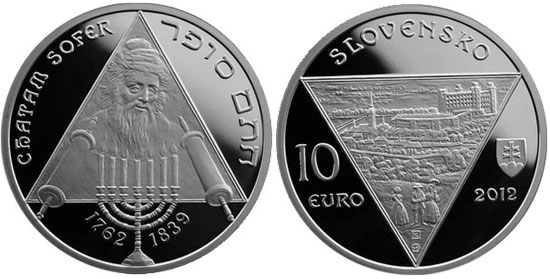 The coin, a 10 EURO silver issue, is the work of designer Pavel Károly and depicts a portrait of Sofer inspired from an Oil painting by Ber Frank Halevi’s original drawing. The depiction is placed within a triangle, one half of a traditional Star of David, and a menorah is positioned below the portrait. His year of birth and death, 1762 and 1839 is seen on either side of the menorah. The text “CHATAM SOFER” is placed around the upper left edge and the same – in Hebrew letters is positioned on the right side.

The reverse design includes a scenic depiction of Bratislava during the time of the founding of Sofer’s yeshiva within a triangle, in opposite position along with the coin’s face value of “10 EURO” seen on the left side and the year “2012” seen on the right. The text “SLOVENSKO” appears above the primary design along the top edge. The coin is struck at the Kremnica Mint in both proof and FDC or UNC quality. Both versions are minted in .900 fine silver with a weight of 18 grams and a diameter of 34 mm. Mintage figures for the proof version is authorized at 7,900 pieces and the FDC version has an authorized mintage of 5,800 pieces.

For more information on this and other coins issued by the National Bank of Slovakia, please visit their website at: http://mint.sk/aktuality.php#a2