I send in to PCGS, NGC and ANACS dozens of coins each month for slabbing, selling those coins in a booth at a local antiques mall. Quite a bit of numismatic knowledge goes into selecting which coins to holder and which to offer “raw.”

In this week’s Coingrader Capsule we’ll look at close calls, coins that I considered submitting but then decided against because of:

Let’s illustrate each one.

Bagmarks. This mint state 1880-S Morgan Dollar may look as if it qualifies as deep mirror–frosty devices contrasting with prooflike fields; but the obverse bagmarks keep it from that designation. (The reverse has fewer bagmarks, but it only takes one side to lose the DMPL [deep mirror] designation.) A top-grading company, such as PCGS, will require a “mirror” depth of 2-4 inches for prooflike and more than 4 inches for “deep mirror.” Those terms are taken literally, as in holding one’s finger 2, 3, 4 or more inches from the coin and still being able to see the finger clearly (as in a mirror). So this coin, one of the commonest Morgans, is likely to earn an MS60-62 prooflike, putting the value at about $55. The coin to me is worth more than that, and likely will to someone else for sale in my booth. But if I slab it, I’ll have to charge $85 to cover the cost of that process. Best to keep it raw. 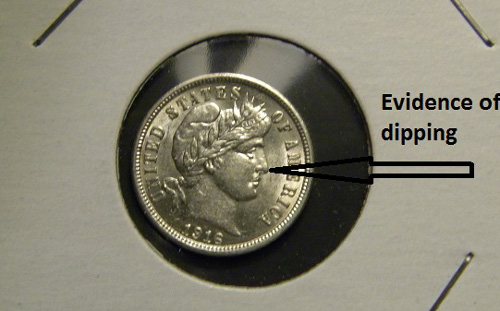 Dipping. Most collectors like their Barber Dimes bright white, with no toning or spots. Several chemical products remove toning and spots and, if used properly with larger coins, such as a Morgan, may actually remove unwanted tone or spotting while still maintaining luster. But dipping small coins like a dime is risky because there just isn’t enough metal, and stripping off the thinnest layer leaves telltale micro pock marks, as in this 1916 example. At best this might grade MS60, worth about $70, or might earn a Genuine or Details label. The fee to slab is just not worth it. 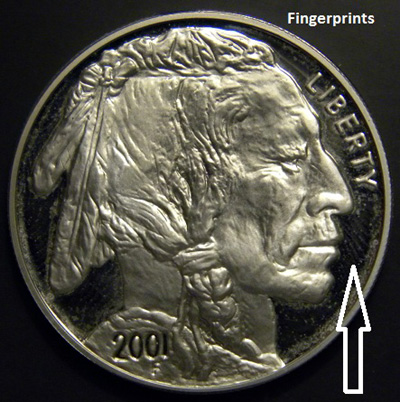 Fingerprints. This 2001 Buffalo Commemorative was shipped from the US Mint in a capsule and must have been virtually flawless. It came in a two-coin package, with an example from Philadelphia and another from Denver. The Denver coin was pristine, so I am sending that to NGC with other modern commems. This one, however, has fingerprints on the obverse. Whoever initially purchased it just had to hold it. As such, the best I can hope for is an PF69 designation, but this will probably come back lower. The only reason I slab such modern commemoratives is the hope for an MS or PF70. Otherwise, the US Mint package is as attractive as any holder. 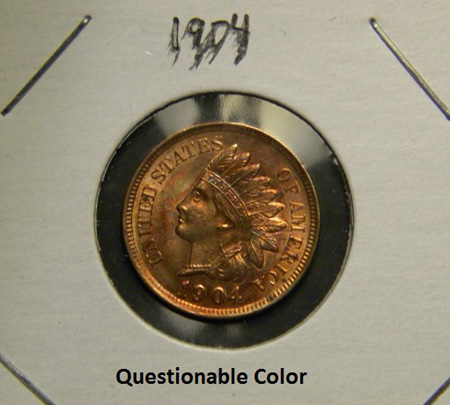 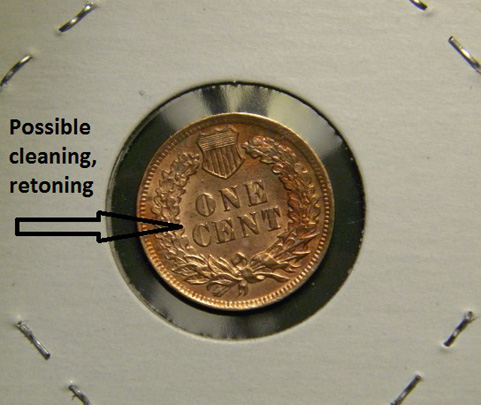 Questionable color. This coin has traces of rainbow toning on the obverse. The toning is not uniform, moving from one color to the next as in a rainbow, but more spotty. Sometimes that can occur authentically, but it almost always throws up a numismatic red flag. Then I saw the telltale clue: The reverse shows signs of a light cleaning. Often that causes retoning. Case closed. This is not going to PCGS. I’ll note the questionable color if I decide to sell it. 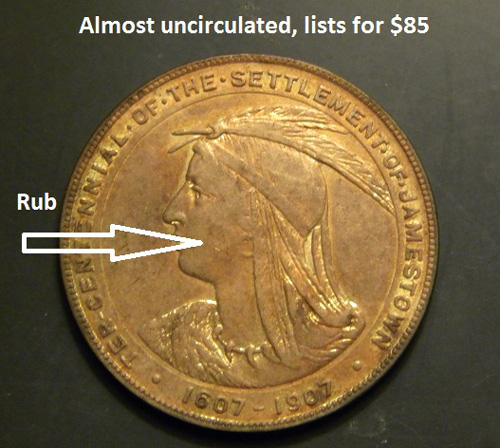 Rub. This is one of the most difficult details to detect, at least for me, a slight friction or wear on the high points of a coin, that can be caused by any number of factors, such as coins “rubbing” against each other while in storage. Another type of rub is caused by coins kept in wooden or other abrasive container without protection of a flip. That will wear down areas of a coin over the years as the box is taken out of a drawer and returned. This Jamestown Expo US Mint 1907 So-Called Dollar (HK-346) has a slight rub on the obverse cheek of Pocahantus. I’ll put it in a protective holder and sell it as almost uncirculated. 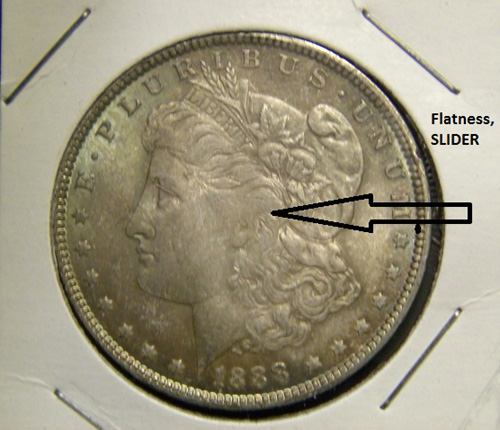 Slider. A slider, quite literally, is an almost uncirculated coin that can pass for mint state if not carefully analyzed for wear. This 1888 Morgan Dollar is a perfect example. It has that creamy toned look that PCGS loves with mint state coins. I’ve sent in several and got MS65s in return. But this one would be lucky to get an AU58. The cheek is relatively mark-free; but the portion above the ear and into the hair is worn, worn, worn. I’ll sell this one for $50 or so in my booth.

There are other types of problems, and we’ll explore them in other posts.

Often collectors who lack knowledge about these problems believe a coin is more valuable than it actually is. Judgment can be harsh if that coin is sent to a top-tier grading company. Being able to distinguish these problems, so as not to submit such coins for slabbing, saves time and money and spares the disappointment.