It was announced this morning (26th April) that the long awaited addition and image of one of the Great Britain’s most admired and celebrated political figures of the 20th century is to be included on banknotes issued by the Bank of England. Sir Winston Churchill (1874 – 1965) will be included on the reverse design of the £5 banknote when it is re-issued as part of the “F” series.

The announcement was made at Chartwell, the former home of Sir Winston by the Governor of the Bank of England, Sir Mervyn King in the presence of the family members of Sir Winston. Sir Mervyn then revealed the proposed design of the £5 which includes a portrait of the Second World War leader which is based on an actual photograph taken by Yousuf Karsh whilst in Ottawa, Canada on 30th December 1941. Also as part of the overall design, the Elizabeth Tower or “Big Ben” as it is more often referred to, is included in the background as seen from the South Bank looking across Westminster Bridge. The hands of the Great Clock are specifically depicted showing the hour of 3 o’clock, which is the approximate time on the 13th May 1940 when Sir Winston Churchill declared in a speech to the House of Commons: “I have nothing to offer but blood, toil, tears and sweat.” This declaration is included in the design and appears beneath Sir Winston’s portrait which is situated towards the middle-right side of the note. As Sir Winston was also a Nobel Laureate for literature, the prize awarded to him in 1953 by the Nobel committee is also included in the background which is seen just behind the image of Westminster Palace. The wording of the Prize citation is placed around the top half of the prize medal in three lines. 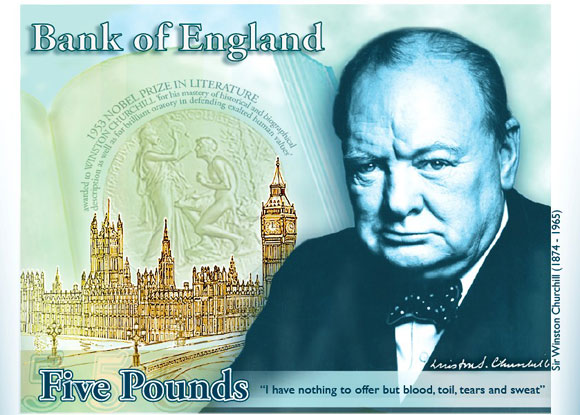 Sir Winston was awarded the Nobel Prize for literature “for his mastery of historical and biographical description as well as for brilliant oratory in defending exalted human values”. Although Churchill was a prolific writer, the Nobel Prize acknowledged the power and effect of his inspirational oratory as much as the quality of his literary output which ranged from journalism to works of academic standing. His writings include The Second World War (1948-53) and “A History of the English Speaking Peoples” (1956-8).

First elected as a Conservative MP in 1901, he joined the Liberal party after the Conservative Party split over free trade. Having served as President of the Board of Trade, Home Secretary, and First Lord of the Admiralty where he helped modernize the navy, he returned to the army, serving on the Western Front, in 1916. Back in Parliament in 1924, he served as Chancellor of the Exchequer in Stanley Baldwin’s Conservative government. After the fall of the government in 1929 he did not hold office for a decade, his so-called ‘Wilderness Years’. Churchill warned of the threat of German re-armament and returned to public life as First Lord of the Admiralty on the outbreak of the Second World War.

In May 1940 he became Prime Minister, replacing Neville Chamberlain and leading the newly-formed National Government. In his first speech to the new Administration he declared: “I have nothing to offer but blood, toil, tears and sweat” and concluded with “Come then, let us go forward together with our united strength” Winston Churchill became a patriotic icon and a national inspiration during the Second World War. Defeated in the post-victory 1945 general election, he argued strongly for Western unity against the threat of Communism. He was returned to office in 1951 and finally retired in 1955, aged 80. Churchill was accorded a state funeral in 1965 which was attended by Queen Elizabeth II – Churchill was the first Prime Minister to serve under the Queen’s reign which began in 1952.

The Bank of England plan to issue the note in 2016 but have not specified an exact month – the Bank have advised that those choices may be reviewed as plans for issuing the new note are finalized. A comprehensive public awareness campaign will be launched before and during the note’s issue date. The “F” series was first introduced in 2007 with the release of the £20 denomination which includes the image of political Economist Adam Smith on the reverse. A second note, the £50 denomination was released in late 2011 which include both Matthew Bolton and James Watt, famed contributors to Britain’s industrial revolution during the latter part of the 18th century.  For more information on this and other banknotes issued by the Bank of England, please visit their website at: http://www.bankofengland.co.uk/banknotes/Pages/default.aspx